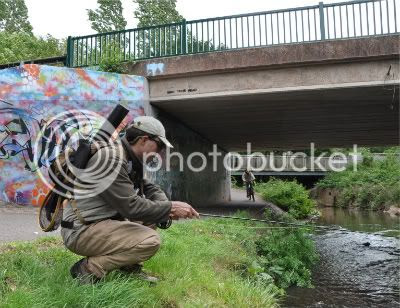 The search for exciting, interesting fishing takes us to some wild, unspoiled places. It also takes us to some crusty, bizarre locations. I'm quickly coming to the conclusion that unlikely fishing is often good fishing. The trout in and around the Exe and Lowman in Tiverton are a prime example. Grubby surroundings, yes. But even the shadow of recent pollution doesn't seem to have killed a surprisingly rich environment. Visiting angling scribe Theo Pike has a particular interest in these urban gems, having taken an active role in restoring the River Wandle close to his own home in London. Visiting family in Devon, it seemed the perfect opportunity to have a crack at some similarly townie trout. It was nice not to be the only nutter walking about town with a fly rod anyway. Judging by a few kick samples, you could hardly call these urban waters infertile: 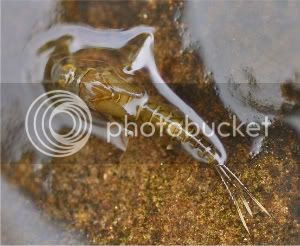 We found the trout highly receptive. The only bother they usually get here is an occasional misplaced clearance from the football pitches, or the odd rusty spinner or beer bottle. Appearances can be so deceptive though. Reminds me of some advise my dad once gave me- "never pick a fight with an ugly person..?." No, it was something about judging books by covers. And this particular book, is such a world away from its rather shoddy cover. Amidst the usual debris and a staggering four shopping trolleys and a drowning flat screen TV we picked our way through a series of curious little pools and runs. Theo opted for miniature sedge patterns in 16s to extract some lovely brown trout, looking every inch wild. Most were in the small but pretty stamp, although one or two really took us by surprise. 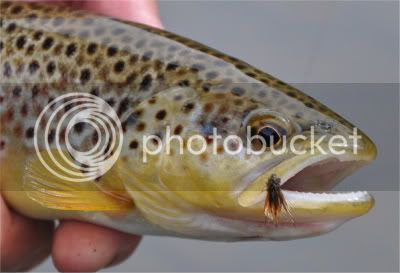 Are urban trout any different to those of more idyllic places? It seems that they are well used to the odd passer by, so perhaps spook less easily- or at least take less time to settle again after a misplaced cast. It was a week of urban fishing in fact, with some rudd, bleak, chub, a skimmer and even a lost tench on the Bridgwater stretch of canal. 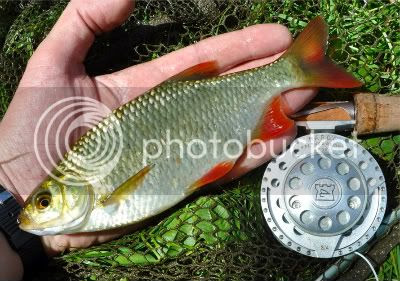 All good fun then. Not the most peaceful fishing exactly, but there's always a curious excitement about catching fish from places where it doesn't look possible. I even managed to produce a trout simultaneously as a passing chav issued the classic "you won't catch nothing in there" line. I was about to point out that this was grammatically incorrect, but didn't want a punch in the face and the fish seemed a decent enough reply. I guess that the moral of the tale is not to judge the fishing by the scenery then. In fact, a strange setting only adds to interesting fishing. My favourite snap shot from a few erm, "vibrant", urban locations has to be this one however, Theo Pike trying to spot rising fish beneath the hulking mechanical arm of a neighbouring scrapyard. It's fly fishing Jim, but not as we know it: 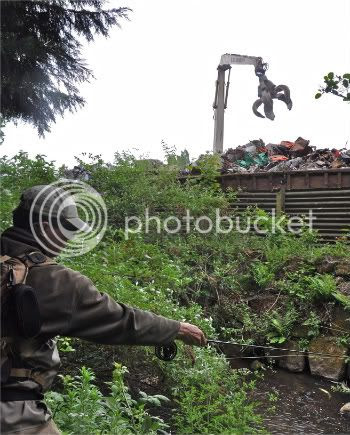 Dominic - a brilliant description of some improbably good urban fishing! It is so pleasing to think that rivers like the Lowman and Exe are producing healthy trout even in their most urban stretches and great that you recorded your adventure with that consumate 'dirty water' fishing enthusiast Theo Pike!
- Merlin