After finding clear water and big perch elusiveon two previous trips it has been good to get back into business at Spires Lakes, North Tawton. Sure, the fishery has a bit of reputation- but these big perch are wily customers and it has taken some experimentation to get them to play ball. The deeper water on the first pond is definitely the place- lobworms and small deadbaits surprisingly ineffective, the best offering proving just a single maggot over regular loosefeed. I have a hunch it was purely finding the right conditions that made the crucial difference: extra colour, overcast and with small roach proving active too. Slowly but surely, the tiny perch became bigger samples and finally, a real old battler of a perch hit the net- a few marks, a battered tail and certainly not the prettiest, but a solid old character, 2lbs 5oz. Great fight on the pole too. 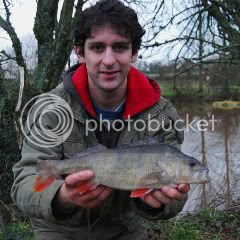 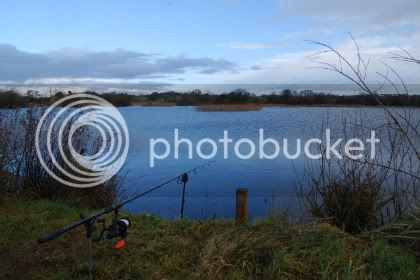 The hunt for perfect piking continues and, big fish or otherwise, the last couple of trips have been scenic if nothing else. Velocity Angling Complex (as pictured above) certainly has the scenic aspect. After a rather muddled journey across Somerset at silly o'clock in the morning, I reached the complex and had a crack at the main lake. Utterly beautiful, I had the luxury of the main 25 acre lake to myself after giving ever helpful fishery boss Shane Alway a call. No more than quarter of an hour in I had a scrappy near ten pounder in the net and thought I was in for one hell of a day. Sadly, the pike had other plans and I only hooked two other jacks all day, one of which came adrift. Nevertheless, I enjoyed the stunning scenery and peace and quiet.
The next free morning off saw a shorter haul to Exeter Canal, on the Turf Locks stretch. Again, great for lovers of crisp, open spaces and scenic fishing. The end section is cormorant infested currently however! I counted twelve birds on my early start and whilst I hate to use the black menace as an excuse, I can't help feeling that these buggers have something to do with the less than dramatic results on this once prolific section. Still, a run eventually ensued and I got my few seconds of excitement; before a very skinny jack came in with scarcely a kick!
The real conclusion on most venues at the moment however is simply that mornings are best; are these pike feeding first thing, then going to sleep? Definitely seems that way- as it often proves even in mid winter, which is also coincidentally the hardest time to drag your backside out of bed for an early session.
Posted by Dominic at 11:57 No comments:

Still coughing, but well enough to fish, the end of the frosts have not meant easy pickings, but at least you can now do away with ice breaking and just fish. What we sometimes forget though is just how much longer the water takes to warm up after an icy spell.
First stop was Tiverton Canal near Sampford Peverell, just for the safe bet of an afternoons sport really. An interesting session too, saved by polarising glasses. The water was utterly clear and still pretty damned cold. The benefit of this was that the pike were there to spot- catching them proved a tantalising, frustrating game. Most of these pike, lots in the small but sporting three to six pound bracket, were very still and not especially hungry. Even dropping a bait right on their noses bought no reaction in perhaps three quarters of target fish!

Eventually, I got my first taker- not the most enthusiastic character, but prepared to accept a small bait; my staple bigger offerings were flatly ignored. He must have spent a good ten perhaps fifteen minutes to make his mind up, nose onto the bait for ages before hoovering up a sprat. No more than six pounds, but very welcome.
The next take came from drifting a small bait past a visible fish. This one sidled up lazily as if to say"oh well, a little snack won't hurt..." A little bigger too. The typical reaction from an excited local followed-" cor it's massive. How big?" Nine pounds exactly- a decent Tivvie fish though on a tricky day, where perhaps a dozen other stalked fish were totally unmoved by my efforts. 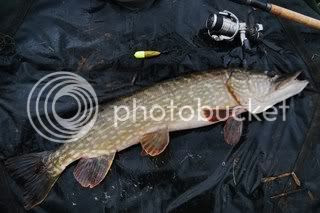 Next stop was Spires Lakes near North Tawton, after big perch. Thought I'd discovered the perchiest swim of the lot, with over four dozen stripy critters to worm and maggot- but none bigger than about six ounces! Then came the moment of truth- a slow bite on worm section and a wallowing, thumping fight on the pole. I was sure this was the king of all perch when.... this bloody great big orfe came into view. Nice to be surprised I guess, but not really the target. Livebaits may have done better, but it's a method I dislike and is against the rules in any case. 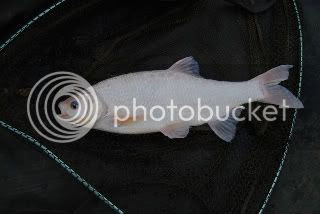 Good grief, what a start to 2009. The real threat to my fishing is not cormorants, foul weather or fish nicking immigrants, but employment and illness. The first is a necessary evil, the second just a bloody nuisance. I generally don't get ill often at all, but when I do it's like those appalling reality TV shows; just when you think it's over, you get another fortnight of misery.
About the only Christmas time trip was an afternoon to the River Tone, where the freezing weather beat any attempts to take chub and dace on the unusual method of czech nymphs. My brother did rather better on maggots, inevitably, but bites were still scarce.
So, to cut a long story short, it has been frustrating. You know you're properly ill when even fishing loses its appeal. I'm getting utterly sick of the taste of Lemsip and the only worthwhile activity has been tying some flies and dreaming of a warmer, healthier spring. I already have a small production line of favourites, including the slightly ridiculous but utterly deadly "Rubber Daddy" as shown below. Who knows, I may even get to use it at some point.... 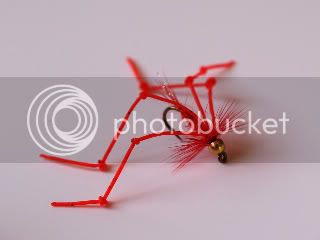