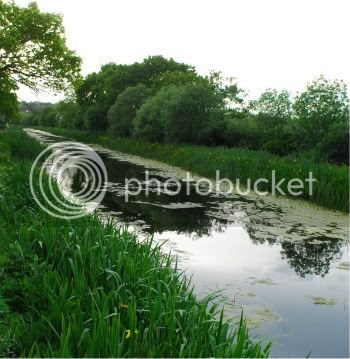 Throw together a four weight fly rod, sunny water and even the odd mayfly and you might guess I'd been on a trout stream this week. Not by a long chalk- but in their own strange way, the canals around Tiverton and Bridgwater can be just as cute. No trout here of course, but plenty of pretty rudd and roach to divert an angler torn between fly and coarse schools. The Taunton to Bridgwater fished in fits and starts, between boat traffic which sadly robbed the water of its clarity. I had called Somerset Angling to see how the cut was fishing and when I asked if the water was clear, the response was classic- "no mate, it's always dirty. This is Bridgwater." 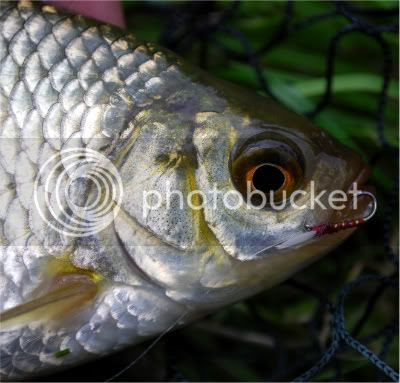 Never mind. The rudd were still rising and the canal showed the sort of mad, burgeoning insect life that would have David Bellamy himself frothing at the mouth- although I wouldn't advise any "wummaging through the undergrowth" around the wrong end of Bridgwater. Swarms of black gnats were everywhere- and the rudd were sipping at the top. Most of my success came to small emerger buzzers in size 16's and 18's. I like these "no hackle" flies because they're easily sucked in- stiffer hackled traditionals can simply bounce off the lips of Mr Rudd.
It was an afternoon of fleeting spells of pleasure- interrupted by churning boats and grey clouds. And yet when it was good it was very good. When the sun remerged and the water settled, it was like someone turning a light on- suddenly visible rudd everywhere. On two occasions I got a double shot of rudd on a single cast by fishing 2-3 little buzzers- like these two beauties: 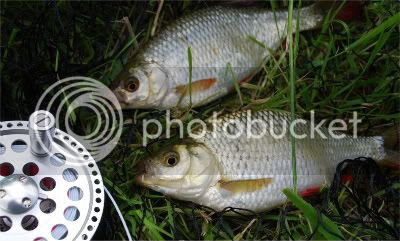 I couldn't resist a stop on the Grand Western on the way home either- which was clearer, but the roach were trickier to tempt in spite of being miles easier to spot. A small f-fly accounted for a couple of solid roach though, and it still seems to me that whilst pike are now par for the course on a fly rod there is a great deal of totally unexploited fishing for roach, rudd and other species. What beautiful fish and beautiful places these are too, the banks already awash with summer growth and life of all kinds. The flag iris with its brilliant yellow flowers is always a summer favourite: 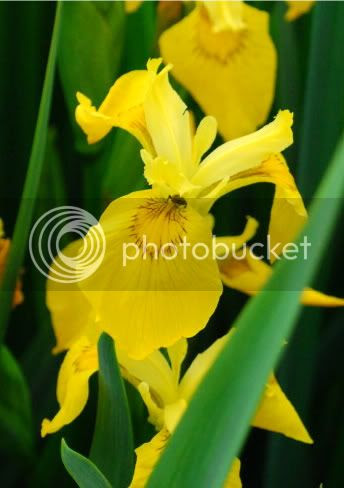