Surprises on a fly rod 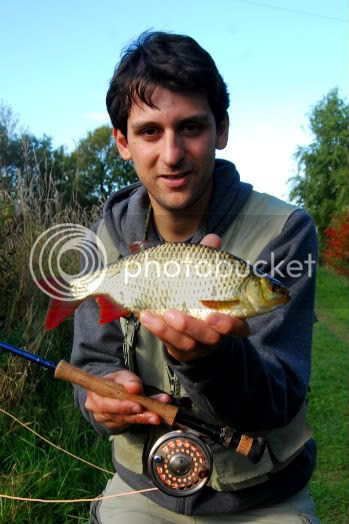 The end of the trout season is very much looming, but there are plenty of other reasons I just can't put down the fly rod currently. Indeed, I'm beginning to think that the fly is a lot more versatile than many would believe. An ultra light session on the Bridgewater to Taunton canal proved a real safari with Seb and two local bailiffs. The lads chose lures, and the initial aim was pike- but with so many other species showing I soon got "distracted". First up were some lovely rudd. 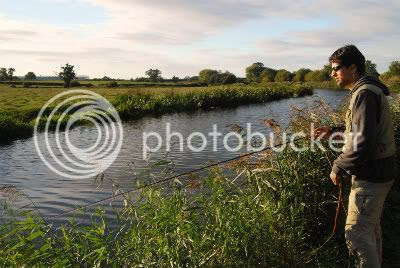 My tackle was rather heavy for these, so after spooking a few I tried a much longer leader with better success. I only had a few small flies, but emergers seem to work very well- if the fish take off the top, fantastic, but if not then it's just a little tweak and you have a sinking fly. And it was this tactic which also snared a real bonus in the form of a tench! 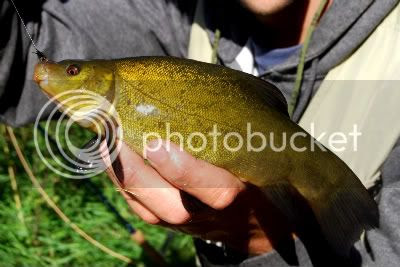 This fish had been spotted cruising around the near side. I still had the emerger on, but again cast well ahead of the fish and gave this a healthy pull to sink it. A little twitch as the fish approached and the tench homed in, before to my surprise he hovered right over the fly and gobbled it up without a second thought. A quick strike and it was on- rather hairy on rudd tackle and just as well it was a small one. A crazy catch then- and I also added roach and a jack pike, and hooked and lost another nice rudd on a small streamer! The lure anglers had no pike, but completed a real A-Z of canal fish with some flawless perch- just look at those autumn colours: 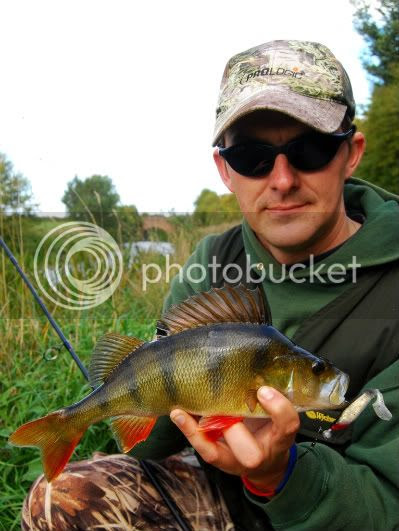 What a crazy day- definitely in the "you couldn't make it up" category! The fish were great, but I think we may have been over optimistic judging by the landing net size- although the head bailiff's daughter made a very cute ghillie: 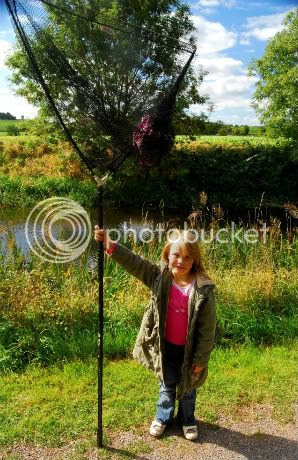 The trout season also ended on a high at Roadford with a short, breezy session after browns. The margins were a little wind- churned, but just beyond the colour line were plenty of trout, all more than willing to snatch a small dark fly. A zulu or cruncher seemed to work best, whilst some little perch also showed up to small lures. 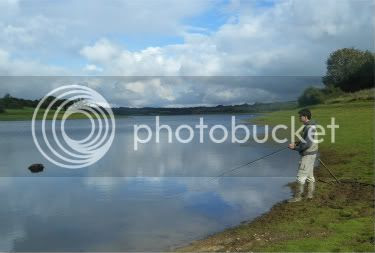 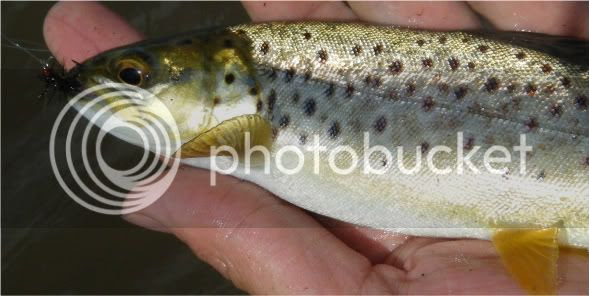 After all the fun and games however, a day on Chew proved less successful. After several hours with no sign of pike, we switched to trout. It was one of those sessions however- lots of buzzers coming off the water but surprisingly fussy trout. Dries earned a few takes in the end but it was a tale of hooked two lost two. With such a dry summer you can also see just how low our lakes are, and perhaps some decent rain wouldn't hurt (be careful what you wish for Dominic!): 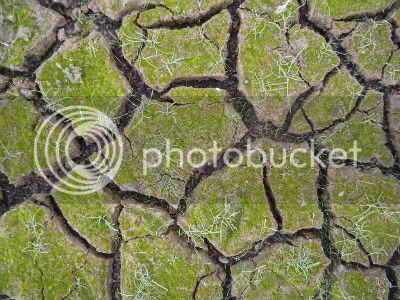 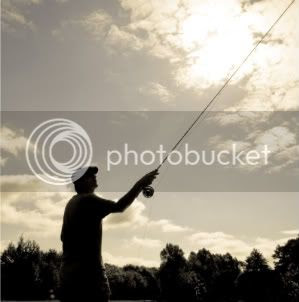 If I had to choose just one species of fish on one method... I couldn't do it and would probably just go mad. It's impossible. There simply isn't the time for even half the fishing I would love to try. Given a choice however, I'd say that a fly rod is about as much fun as it gets. 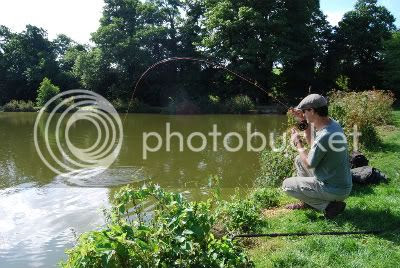 No military preparation or ton of tackle required- just simple kit and a bit of thought. With just a little scrap of summer left I've been back on the coarse species- first of all carp. Yes, they take dog biscuit type flies. But I'm more intrigued by using snails and other natural patterns: 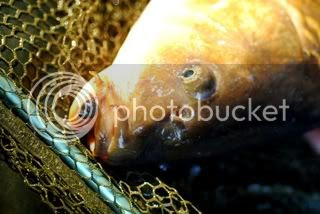 Are they as efficient? Probably not. But the process is somehow more rewarding. Both Millhayes and Padbrook Park have proved good fun in the last few weeks. 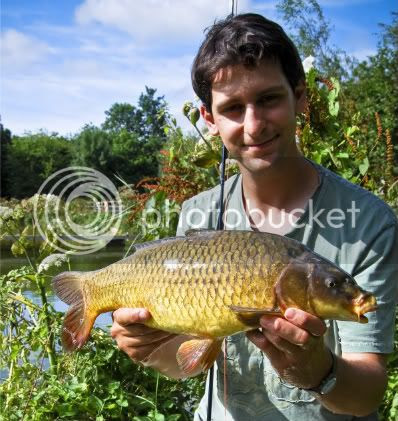 Better value still is the canal, where roach and rudd continue to provide great sport on dry flies. Some days the wets work better- but lately little parachute style emergers are even more effective. A light tippet is a must though(2lb or so), for this approach which is surprisingly selective. A small fly landed gently, just in front of but not too close to a moving fish, is often taken without hesitation. The art is in making it look like something edible has just dropped in the drink. Again, it's not brutally efficient but a lovely way to pick off some nice fish: 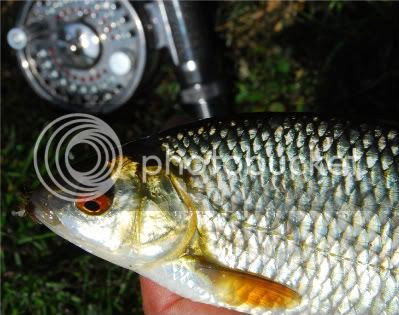 These leisurely little sessions are great, but bigger excursions have also been calling in the desperate push to get features covered. A bit of a discovery this week too- you would be hard pressed to find a more beautiful small stillwater than Tinhay Lake (below), near the famous Arundell Arms hotel. 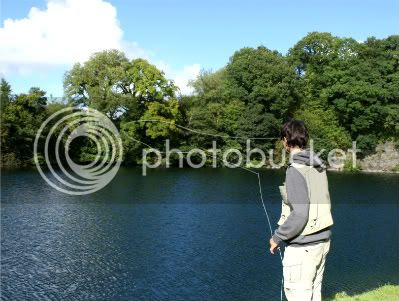 The grown on rainbows at this flooded quarry are fantastic fish- stupendously fit and fresh looking. Even better, the way to get them is often with emerger buzzers and dries. Local guide and former angling Editor Tim Smith was a great help in taking some shots and also passing on his intimate knowledge of this cracking water. Long, degreased leaders were a must on a calm day after fussy fish. We managed some smaller but nonetheless stunning rainbows, but my most vivid memory of the day remains a lost fish that sprinted an outrageous thirty yards across the lake, taking me into the backing in jaw dropping style before coming adrift. So much for the cliches of trout fishing as a sedate pastime! The Arundell Arms is well worth a call- the lake is booking only, but well worth a visit (www.arundellarms.com). Look out for the feature this autumn in Total Flyfisher. A big thanks to Tim for taking some pictures and being so helpful- as you can see below, you won't find finer looking rainbows anywhere in the Westcountry:

Less sedate is perhaps my most unlikely recent haunt, the urban River Exe, the subject of my Angling Times story this week. Empty tinnies and concrete... but also leaping salmon and some surprisingly rewarding fishing for a whole range of species. Exeter based reprobates will recognise the spot instantly (and probably steer well clear!): 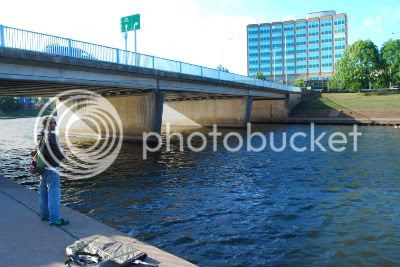 A Day on the Dart 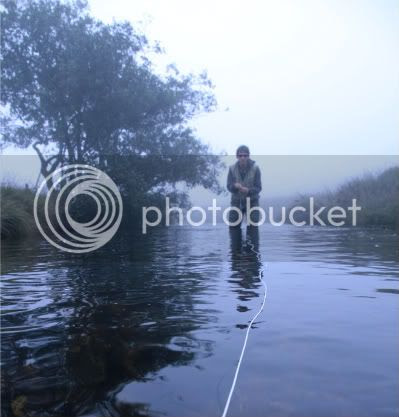 Besides its meandering tourists and centuries of strange history, Dartmoor is also home to some of the most perfect little streams on the planet. I simply love it here- its beauty isn't the twee, picture book type but a wholly more stark, rough cut variety. Cold, twisting rivers fringed by boulders, bogs and barbed wire. Real country.
Andrew Pym joined me today to capture the mood- although starting out in the fog at Two Bridges, you could scarcely make out the other side of the river let alone any rising fish. Prospecting with a small hares ear or spider was the way forward, several cracking little brownies striking at a wet fly. 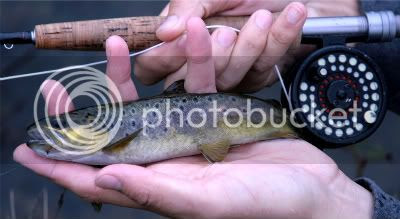 Slowly but surely, the mist cleared and we moved on to an even smaller stream, Cherry Brook, also now on the Westcountry Angling Passport scheme: This is extreme close quarters fishing on a waterway often no wider than a fly rod, a case of creeping as close as you dare and dropping a dry fly into the brook to resemble an insect that just tumbled off the heath. Dynamite! Many splashy takes were hit and missed in what proved to be a fun challenge with these vividly coloured, wilder than wild trout, some very diddy but all stunningly marked.

One more stop was in order before calling time, this time on the East Dart at Post Bridge, where you can pick up a fishing ticket at the post office and get straight into the river. No need for wet flies or fancy tactics here- just more wild browns than you can shake a stick (or fly rod) at. They kick, they jump- they slash at anything small and dark. Indeed, when fishing is this much fun size really isn't everything. Credit also due to Andrew for wading through the boulders with an expensive camera- brave man! 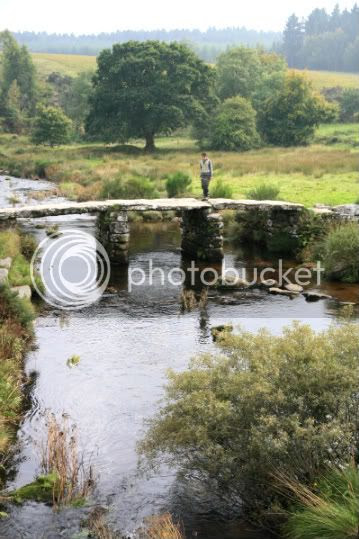