Floodwater Piking and Flounder on Lures 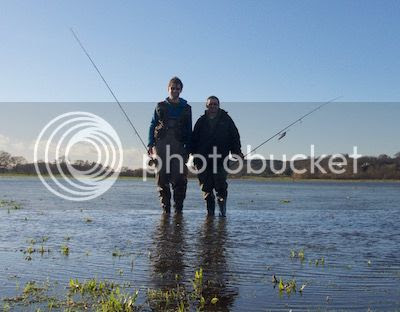 I’ve always loved unusual fishing and the sport’s capacity to spring a surprise, but even compared to my oddest adventures, my one day mission this week was bonkers. To be brutally honest I wondered whether I was on a hiding to nothing as I sped towards Dorset and saw trickling streams rendered into gruesome, muddy flows.

I was looking forward to catching up with Nathan Edgell, but fancied that even with his knack of catching specimen river pike we would need a big slice of luck, or our brains testing. Along the access path to the fishery alone, we were up to our thighs- and perilously close to that annoying leak in my waders, just around “Crown Jewels” level. And then it was tricky to see where the fields ended and the river began. 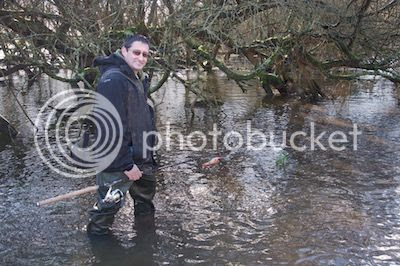 Now, I’m not going to give away the whole story in this hasty blog, but if I can give you any inkling as to how Mr Edgell catches so many pike it has nothing to do with fancy tackle or secret tactics and everything to do with his willingness to be mobile and get stuck in. He is like the Heineken of pike anglers- the one who gets to the parts others don’t reach. By which I mean he gets stuck into the bits most of us walk right past or take one look at and think “no way.”

Not only did he winkle out a pike on the day, but he did so on a lure and the fish was absolutely cracking! There’s a great article there, with some revealing dodges anyway. More to follow... 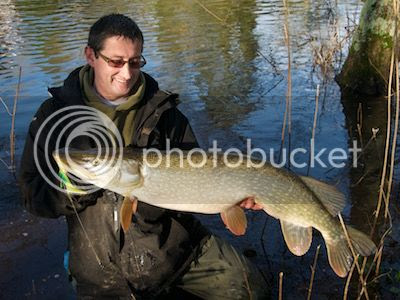 It was only later in the day when I managed one of my own. With takes at a premium, I decided to put my final efforts into an hour or two with a sardine in a tempting looking slack. I managed to trip and almost totally fall in just getting into a position where I could fish properly. Boy was it cold. I was starting to shiver when the float started to take a walk- and in a split second all discomfort was forgotten and it was just man against pike. 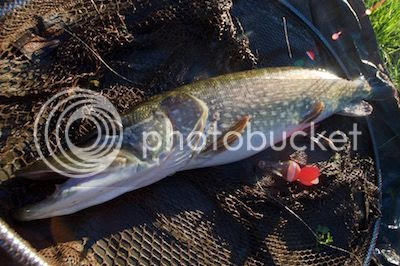 It was a pretty and hard-fighting fish too. It fought harder than some much larger fish I’ve caught. Nothing like as big as Nathan’s, but hey- that’s a pretty normal state of affairs for anyone who follows his exploits! I didn’t bother to weigh it, but it looked like a scraper double. It also had the top of its tail missing- perhaps an otter attack, but I couldn’t say. Perhaps one of you blog readers might be able to enlighten me? It looked well healed and the fish was fit.


I was literally shaking with cold as I left for the coast to catch up with another fishing pal I hadn’t seen in a while. I last met up with Andy Mytton on a towpath zander fishing trip (hence his appearance in my Canal Fishing book). Ever since then though, I’ve been staggered by the sheer variety of sea fish he catches on lures. Unless, like a goby, you’ve been hiding under a rock, you can’t have failed to notice how Light Rock Fishing or LRF is getting increasingly popular. And having done a lot of recent fishing with light lure gear for perch, a visit to the sea was overdue. 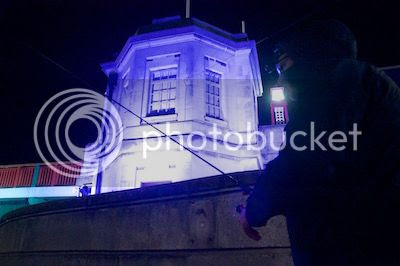 One species not usually associated with lure fishing had particularly piqued my interest however. Flounder are a childhood favourite that I’ve always had a soft spot for. They look almost comical, but if you are a shrimp or crab these are mass murderers. Even so, I expected it to be a tough challenge to tempt one on a lure. If anyone could help me it was Andy and his pal Ricki Hill, who are real specialists when it comes to fishing the salt with small lures.

While the river that morning had been a scene of millionaire’s houses and the Green Wellie Brigade, the Dorset town where we met was a world away. On exiting the warmth of the car I saw a rat running along a wall and the police speed past. Some poor homeless chap was hunkering down for the night in a sleeping bag and the waters looked eerie.

Again, I can’t spoil the whole surprise here, because Andy’s tactics and observations were fascinating deserve a proper article later this year, not a filleted blog entry, to do justice. But By working tiny worm style lures low and slow close to features we managed to draw the odd bite. 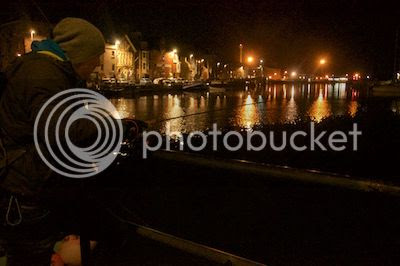 Ricki had just caught a little school bass when my own chance came. I’d had a suspicious pluck already, when a few casts later the little rod went bouncing over. I was instantly transported to being twelve again with a cry of “I’ve got one, I’ve got one!” And yes, it was a flounder! 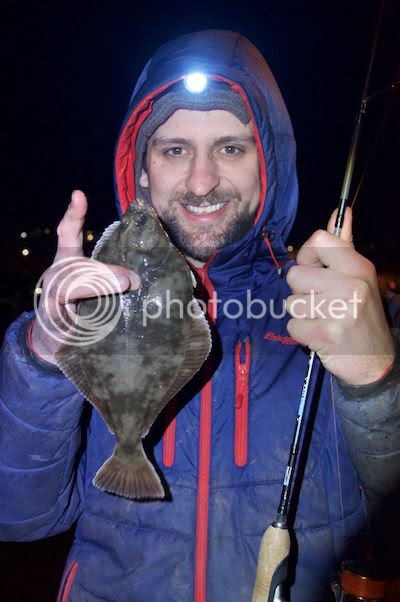 I cannot quite convey just how chuffed I was with this fish. Perhaps it’s because I’ve tried and failed to catch these fish on flies. I now know it’s possible without bait though, and the fly rod will make another appearance this year- no doubt aided by Andy and Ricki’s fascinating tactics and observations on the species.

Beyond flounder there are a whole galaxy of species to target with the light gear too. Ideal for the “toy” rod I’ve enjoyed using so much for perch lately. Delightful and unusual fishing, with both a world of detail and quite specialized stuff but also perfect for big kids. Right up my street- and I can’t wait to experiment further with both tiny lures and flies this year.

Otherwise, it looks like winter might finally be here. Anything but more rain I say! I wish you tight lines in the meantime anyway and should you fancy some more reading I've also updated the Turrall Flies Blog and received another incoming report from The General that you can read here. Keep warm and be lucky!
Posted by Dominic at 13:53 No comments:

Strange and often grim weather has been the challenge of recent fishing. Sure, you can stay in and just look out of the window with dread when the winds hit home and rivers rise. But quite often, braving rough conditions seems to result in good fishing. 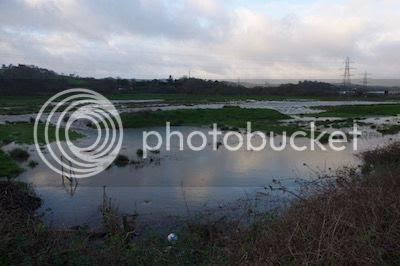 To be brutally honest, I think I’ve got it wrong on quite a few days this season. I’ve chickened out in the gales and sat it out with baits. But the weather has been so mild this winter, you get the feeling that the pike are often still more willing to chase than pick up a static bait.

On slow pike fishing days, I start to think Exeter Ship Canal should be renamed Exeter Shit Canal. The rumours start to spread, about cormorants and poachers and tackle shy pike. I fished for two blanks on the trot with bait, before I got restless and tried a spot of fly fishing.

The weather looked absolutely foul that morning, as I hit the water I for first light. I could just about make the fly out as it returned to my feet. I snuck into a cramped little spot and tried the margin, just a few yards along the bank. Even the margins on these ship canals can be quite deep, so it’s important to let the fly sink and not retrieve too fast.

On this occasion, I tried a nine-weight set up and the monstrous pink fly my mate Dave West Beale calls The Gay Assassin. I’ve said it before, but pink is so underrated for pike and predator flies. It really stands out in almost any conditions. In this case I also add an obscene dose of flash too, with a generous pinch of UV tinsel such as Multiflash: 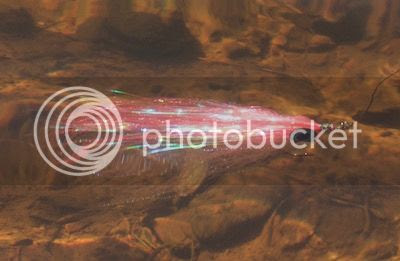 Encouraged by reasonable clarity, I had only made a couple of casts when something whacked the fly. A rush and then gone. Perhaps it hadn’t felt the hook or had some sort of prejudice against pink though, because the next take was even more savage. 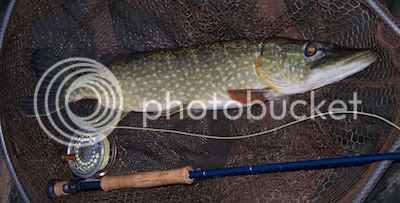 Four or five pounds of lean, fit pike. And so it continued for about an hour, with four other, similar sized and smaller jacks providing plenty of hits. Pete Wilkins also joined me, putting a flatwing pike streamer through the margins and getting followed by the best we saw on the day, of perhaps seven or eight pounds, that watched with a beady eye but just wouldn’t open wide.

When the weather got really foul, Pete’s camper van also came in very handy to drink coffee, have a catch up and and discuss Exeter’s FA Cup tie with Liverpool. I think you could survive the apocalypse in this vehicle, which also provides an ideal den for Rocky, a giant, hairy and delightfully dopey Alsatian.

I’ve spent too many weeks fishing solo, if at all, of late though. Writing for a living can do that to you. So it was also pleasure to speak to the Somerset Pike Anglers’ Club lads at their January meeting and catch up with so many familiar faces. That said, I had spent Monday morning feeling a bit like a pike myself, after a hospital procedure involving a camera on a long tube and my throat. They were sporting enough to release me afterwards, but it wasn’t pleasant.

Among other topics were my use of single hooks for pike, whether it comes to fly, lure or bait fishing these days. The deadbait rig has been working a treat in fact, ideally with nice soft baits such as sardine. A lot of the drains and canals in both Devon and Somerset are muddy at present, so I do also tend to groundbait. Yes, it is a little extra bother, but I think it’s worthwhile. Rather than just getting a quick run, you can almost build the swim. This is especially worthwhile where you find spots with a lot of small fish topping, and you fancy there might be several pike. I use nothing fancy- just brown crumb and chopped fish. Works for me anyway; this was the best of three fish, at just over sixteen pounds. 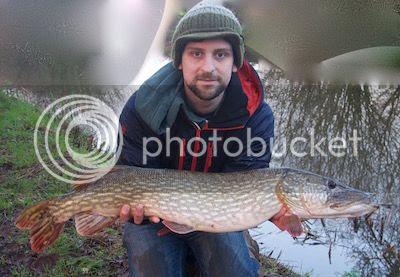 Of course, pike aren't the only fish to target at this time of the year. Trout fishing continues right through the roughest weeks of winter. For any of you who enjoy fly fishing, my recent Turrall blogs are worth a look: www.turrall.com/blog/
Whatever you fish for in 2016, I wish you crooked lines and happy hunting. 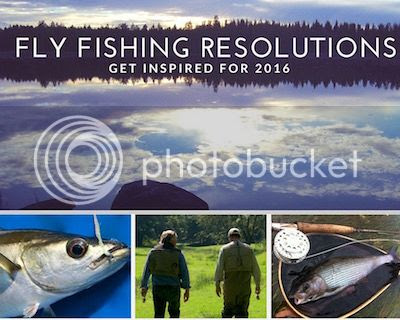