Sunday on the Stream 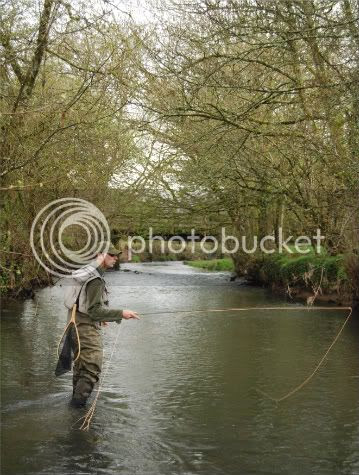 A welcome return to the stream in search of trout this weekend at Gortleigh, a typically wild, pretty part of the Westcountry Angling Passport scheme. Fishing with my brother, we hoped to find things waking up nicely. No shortage of insects certainly, with some early sedge and odd olives appearing. Rising, active fish were more scarce however and most of the small but beautiful brownies caught were taken on small hares ears or flashback PTN tripped through tempting areas.
Perhaps I get too optimistic with early season trout fishing: I quickly get visions of rising trout taking dry flies, when more often it is a case of fishing smart with nymphs. For much of the day, the best sport was catching flies, not fish- something I intend to do more of for the camera this season. The cliche for our wild streams is of small, delicate insects and corresponding patterns- todays surprise, in total contrast, were a few huge stoneflies.

Little interest to the trout it seemed- but what magnificent beasts these are. More relevant to the fishing though, a few brief samples also revealed tons of olive nymphs- both agile darters and stone clingers-, as well as numerous caddis larvae. No shortage of food then and eventually the trout hit our dry flies in the early afternoon. Some cracking bites came to klinkhamer style sedge patterns with these spirited little battlers, some of which fancied themselves as miniature salmon as they jumped and hurtled about. Excellent fun on a three weight rod and a positive sign of things to come for the coming weeks I hope. 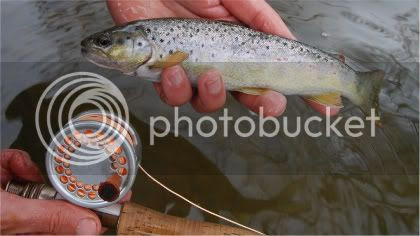 Life on the Pond 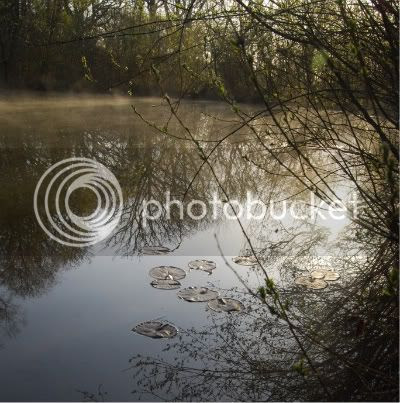 The joy and frustration of fishing in a nutshell is that you never quite know what you're in for. Even when the signs seem clear, a question mark hangs over each day and just like blazing skies in April, you don't always get what you expect.
At Legge Farm, a new water, I thought I'd found a perfect little pool for a sunny morning. "Species: True crucians only" read the description. I just love crucians; when it feels like fishing is getting too serious, perhaps too much like hard work, they put some of the simple magic back into the sport.
It all looked very promising as a swim was baited on the misty pond early in the morning. The first major stumbling block was a proliferation of tiny rudd- snaffling everything you tried initially, before the crucians showed. The Crucian bite is a phenomenon in itself. Little lifts, tiny taps and minute little draws on the tip, as if the canny buggers are sending you a message in some obscure code. The pole was a decent way to suss presentation though, and I did manage a few cute, brilliantly gold crucians. The titchy average size however, along with a lack of predators doesn't suggest a great head of better fish in here. But some fun, flippant fishing all the same. 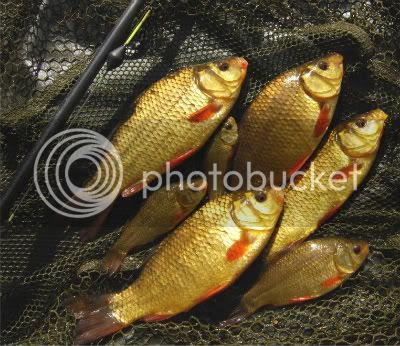 Otherwise it was a case of switching ponds and methods. Lots of nice rudd and skimmers fell to a pole approach and I also spent an hour or two fishing for carp on the fly- still a little cool at the minute and I managed just one carp on the day. No signs of the venues grass carp either, a species I've never caught. Legge Farm has just changed hands and it will be interesting to see what happens here- with a little thinning of numbers, the crucian pond ("Woodland") could become a real treat. 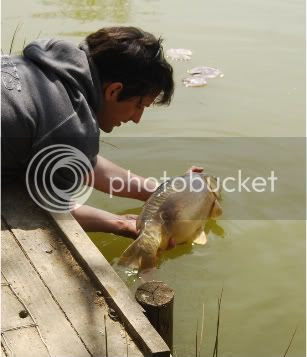 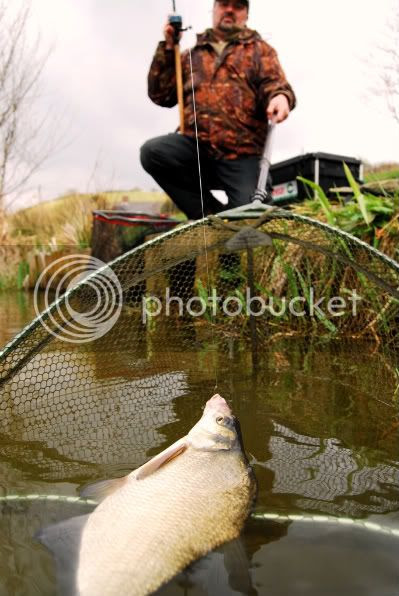 A photographic assignment this week, trying to capture Ian Nadin's light waggler tactics with the aim of a healthy mixed net. How typical though that after days of terrific sun shine and great light, our trip to Tiverton AA's Lakeside fishery at Exebridge proved a fairly dour, cold affair. Nevertheless, with the aid of little and often feeding and light line, the fish were persuaded to bite. We were hoping for skimmers, crucians and tench from this pleasantly challenging fishery- imagine our amazement when the first fish was a greedy brown trout! 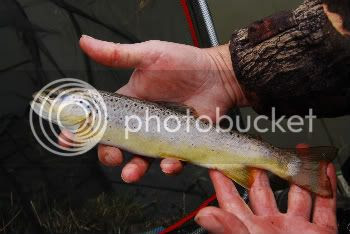 I do like Lakeside. It's not overstocked and you have to work at it, but you just never know what you might catch next. Maggots and casters fished on fine 0.10mm hooklengths were just the ticket for shy biting skimmers, roach and hybrids, with a good sized perch and two nice tench also joining the party. 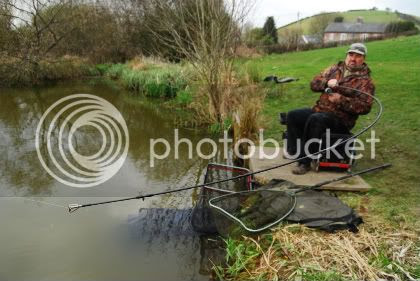 Its always surprising just how timid decent fish can bite- but by dotting an insert waggler right down, Ian got amongst them. It was a pleasure just snapping away as he worked for bites- his classic old Abu 506 reel screaming nicely with the Tincas, a piece of kit made before I was even born! 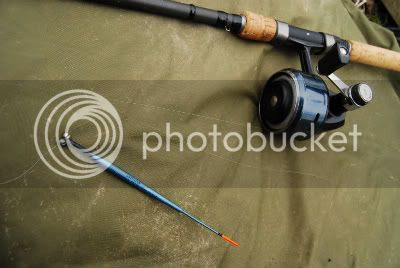 I'm tempted to return without the camera for a bash myself at this place, which has all manner of species. Also curiously refreshing to witness NO carp netted! The only thing missing was one of the venues crucians: funny how you can catch several one day and not a single cru on your next visit. A really colourful mixed bag though: 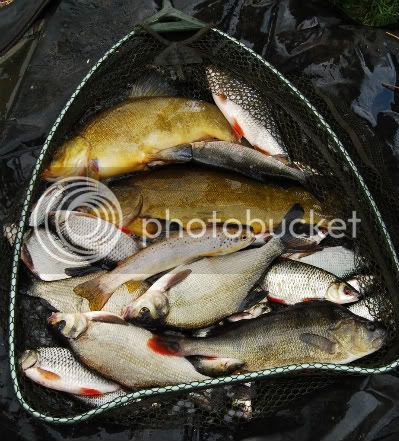 For the record, we had fancied West Pitt Fishery, but the owners have recently tipped a load of small carp into their crucian pond- a really daft situation, which could have a result similar to that at Four Ponds Fishery, where the mixed lake was ruined. Pretty thoughtless and I don't mean to be harsh, but I do wish fishery owners would think before flooding well balanced waters with greedy, small carp. They are literally gobs with fins and the effects can be catastrophic as the shyer species are simply bullied into insignificance. It's not like there's a shortage of carp fishing venues in any case, whereas balanced, sensibly stocked waters with a good range of species are another story. Lakeside is a real gem of a place on that score and whilst there are odd double figure carp the one rod only and no boilies/pellets rules probably keep most carpers away.
Posted by Dominic at 07:55 1 comment:

From Wet to Dry 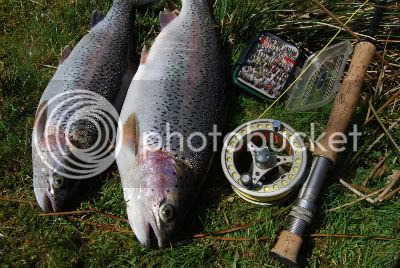 The years first trout on a dry fly is always a hopeful sign. It's also nice to be reminded what a sunny day in spring feels like. The going has proved steadier on still water rather than the rivers this week. At Bratton, a day session provided an encouraging start with a good fish to my dad on a hopper, whilst I got early bites on a buzzer fished just under the surface. Strangley though, the fish then seemed to switch off the naturals and head deeper, although it was a beautifully sunny day to be on the bank. It's hard to be a purist when it's not working and thankfully a switch to lures soon had a procession of rainbows on the attack, an orange fritz or cats whisker the most effective method short of a stick of dynamite. 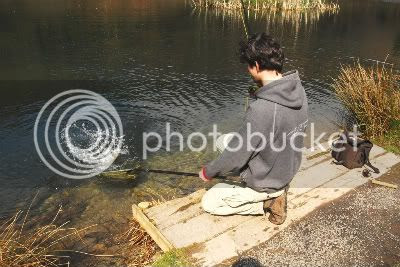 The fish at Bratton really are mint- full tailed and well marked creatures. Seems almost a shame to keep applying the priest, although with the water getting warmer catch and release is no longer permitted. Someone also got carried away with the priest as you can see from the shot below- one you are unlikely to see in a fishing magazine at any time soon: 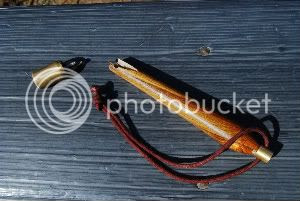 A morning on the River Culm was surprisingly slow however on saturday. Strange really: the river had fined down, plenty of dark olives were appearing by mid morning and yet there was not a single rise. Most odd- although I did manage a cheeky little brownie on a hare's ear. Otherwise though, the frustration level was probably on a par with watching Exeter City draw 0-0 with Leighton Orient later in the day, two teams with all the cutting edge of a rusty pair of safety scissors. Never mind though- more sunny, settled days and things are sure to improve and I can't wait to try some of the new water on the Westcountry Angling Passport scheme, including some lovely water on Dartmoor. 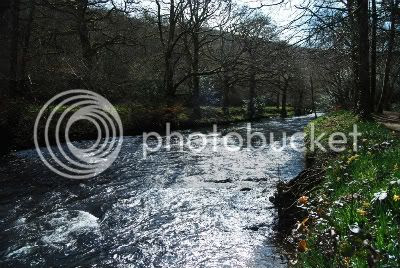 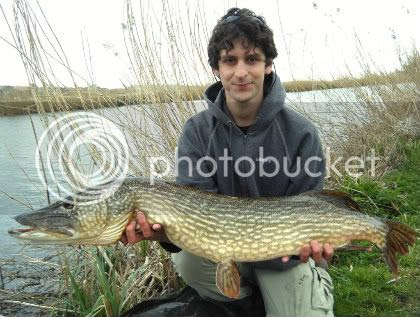 Whilst not everyone's cup of tea, I love sink and draw fishing. It's versatile and totally natural. A lolloping, decent sized prey fish always looks great in clear water, to me at least. Having earmarked a few small skimmers in the hope of a decent pike, I spent a biteless hour or two this morning before connecting with something solid. At first I guessed it was a lifeless, hidden snag- until the line began plodding for the centre of the canal! I had a few real heart in mouth moments as she neared the bank only to steam off again, making the reel clutch groan... no sodding jack, but one of those occasional "oh shit" fish! Moments later I netted a lean, big headed pike of 23lbs 10oz. 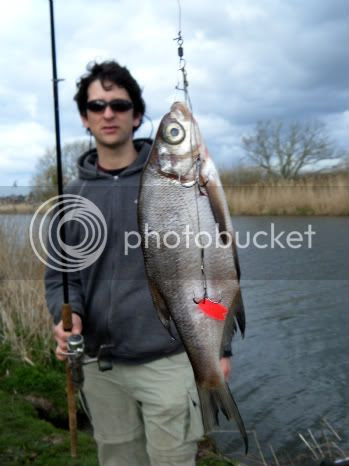 Absolutelty awesome! The fish looked lean for her length too- perhaps having already spawned. Meanwhile I also checked a few licenses. The usual score really- a few pikers about, but some really skimping on equipment. Pike demand BIG nets and mats- unless you like the idea of battered, scratched pike. Indeed, the sooner we make pike fishing as tight as carp fishing with conservation measures the better, I believe.
I guess a bailiff is never the most popular figure- but someone has to keep an eye out. It's probably more my good fortune that explains why my angling mates want to lob me in the canal. Also very satisfying to take another lovely fish on my own favourite wobbling rig: nothing complicated, but I still absolutely swear by it. For those regular surfers, do also keep your eyes peeled for my new, revamped site- should be ready very soon with some new stuff for everyone.
Posted by Dominic at 11:13 1 comment: