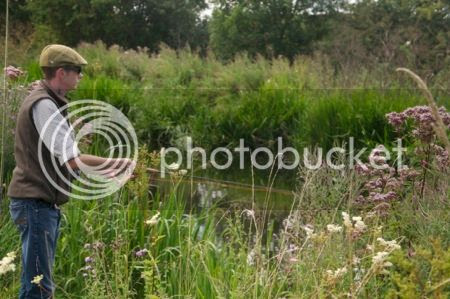 I type these words tired, but enthused after an epic weekend of fishing in great company, after the first ever Fly For Coarse summer bash. The idea was a footloose two days on different venues, with lots of species to chase. Which is why, slightly fuzzy headed from parts as far away as Sussex, we were gathered by the canal, early enough to draw some funny looks from the locals.

Which is where we come in really. With David West Beale, getting a bit of lip from a lady on a boat with a face like a disappointed teabag. He had spotted a solid perch in the central track, and was about to cast.
"You're not allowed fish within forty feet of my boat."

David was polite, bless him. I think I'd have pretended not to hear her, and got at least one cast in, before taking the piss out of her. But we saved the hassle and kept walking, and it didn't seem to matter because the whole canal was a picture. There were shapes everywhere- of roach, rudd and jack pike, occasional bream or tench, but also a steady breeze.

For the sake of the visitors though, I was mainly just glad to see the canal so clear. Among the faithful were fly enthusiasts Ian Sheridan, John Maskell and Andy Field. We mixed and matched tactics, with most starting on small wet flies. Among several hits and misses we landed roach and rudd, including one or two quite big ones, with small spiders and bead heads working best. 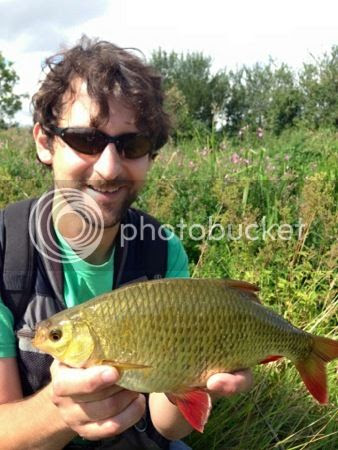 The Bridgwater to Taunton Canal can be fascinating for this- with miles to explore the next thing you see could be a shoal of small perch or a three pound chub. But I had also predicted we would find good perch. It's great fun fishing with mates, because you can chop and change methods, swap rods and spot fish for each other.

David West Beale had brought along some lovely perch flies and a light predator fly outfit, so I was quick to point out a good perch I had spotted in the main track of the canal. But until he cast, I hadn't noticed the other three fish in the swim, all a decent size. He put out a cautious, short cast first- but even though the biggest perch was some three or four metres away, he came hustling forward. With a single twitch the lips flared open, and with a careful haste, David had guided her into the net. 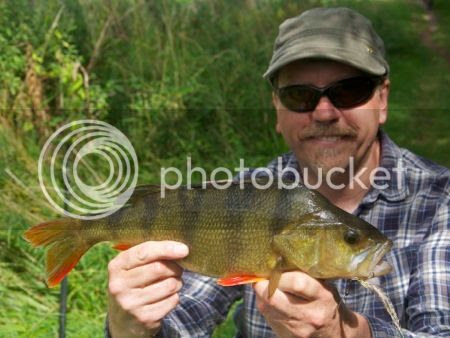 Wow! It was a really mean perch, an ounce over two pounds and a true canal specimen. The grin didn't leave his face for several hours I think- while the others all got plenty of bites and caught further roach, rudd, hybrids and bream. 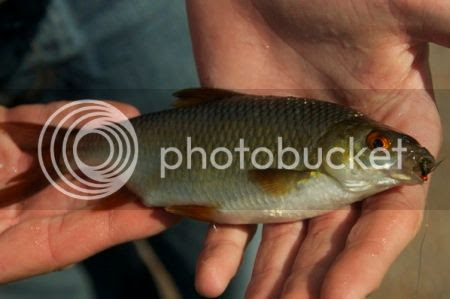 Silver bream also followed, while the only hooked pike was one that had snapped at a small roach I was playing in, before letting go.
We walked for miles over the two days, to give everyone their dues. There were some great wise cracks, and some healthy needless competition between Ian and John, who are the sort of close friends who show their brotherhood by relentlessly taking the piss out of each other.

But perhaps what I like most about these gatherings is the exchange of enthusiasm and ideas. You get to have a cheeky look in other people's fly boxes, chew the fat and drink in some late summer sunshine. 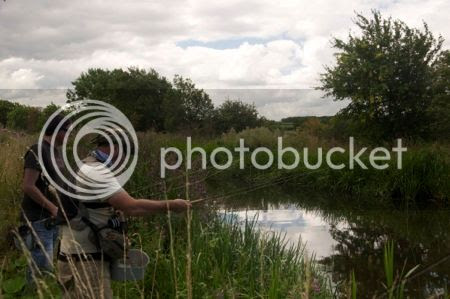 After a long walk on the Taunton Angling Association waters, we were hot and really enjoyed that first pint. Some made their long way back, but for me and Dave there was still time for some late action on the canal. Fearing that the light was dying, we could still make out some silhouettes just under the surface. Chub!

I tried a flick with a small fly, but it just didn't register with the next fish I cast to. So instead, I reached for probably my favourite canal chub fly- the Spider Sedge (a long shank hook, soft mobile hackle and also a traditional feather wing). I lost sight of the fly but saw the chub I had cast in front of rise a little, and white lips gobble.

These chub are not exactly common on the canal, but always welcome and often a decent size. This one must have been a couple of pounds of thereabouts. 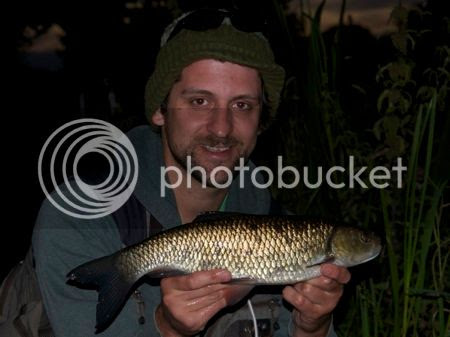 In fact, that late action, and the likely muddy state of the River Tone, sealed it for us. So David and I headed to a different bit of canal the next morning. 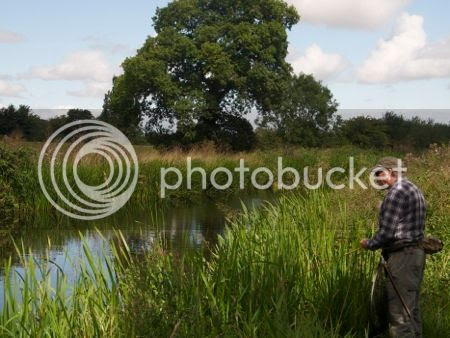 To cut a long story short, we added more miles and a few more fish to the bargain. Frustratingly though, I just couldn't find the shoals of better rudd, although roach obliged and I also caught both hybrids and a solitary silver bream. Nice for variety if nothing else. David also got bites, but struggled to tempt much of size- although perch and the odd pike would follow, they just weren't quite crazy for it. No fear- because he had a long journey back.

With a couple of hours to kill on the way home though, I decided to have a quick look at another bit of river alone. Actually, I'm glad it was just me, because the banks were horrible. Such is the way with good chub fishing. But here I'm talking nettles, brambles and all too often that horror of horrors: Himalayan Balsam.

I had been walking on an overgrown bank when the next step took me sliding abruptly into a seven foot drop, right in thick nettles and muddy reeds. It's lucky I'm tall really. Otherwise I might have been stung far worse- but it was one of those nasty moments. And there then follows the horrible process of trying to clamber up the bank, up to your armpits in stinging nettles.

Thoughts run through your head in these testing moments: "You idiot, what are you doing here?! You're stung to shit and the river is too coloured…"
But crazily, from my new position I started to see rises upstream. Worth a go?

The stings were tedious, but I decided to get wadered up and be bold- I had already been humiliated by almost falling in, so what the hell? Better prepared this time, I managed to get myself into two or three decent positions, using the reach of my ten foot four weight to reach out over the foliage.

Because of the high, still fairly muddy water I went big and bold with fly choice, fishing my wasp pattern, the "Jasper" or some grasshoppers I've been tying lately. The fish were surprisingly keen to rise, given the murky condition of the water. A missed a good solid fish beside an overhanging bush, before tempting one of his shoal mates to come up and gulp. I can think of more glamorous places to spend your Sunday, but this chub was worth it: 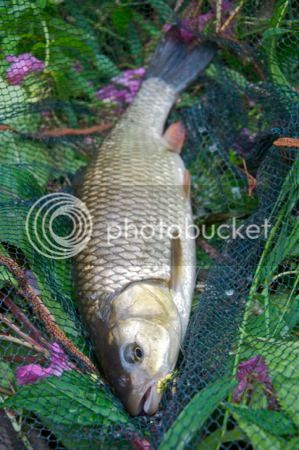 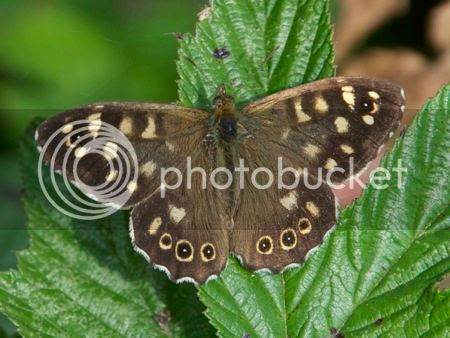 Catching up, but not growing up 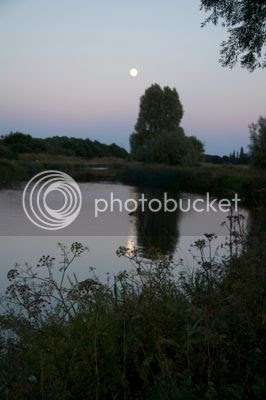 A crazy summer so far, with hardly time to stop for a pint and a fish, or even to do this lousy blog- for which I apologise I've been a bit slack with. But I've been secretly busy. I've enjoyed the company of lots of new anglers with my coaching days and with Turrall at the recent CLA Game Fair. We had an amazing weekend teaching youngsters how to tie flies. Do check out Turrall Flies on Facebook and the current blog for lots more pictures, news and all good things fly fishing. 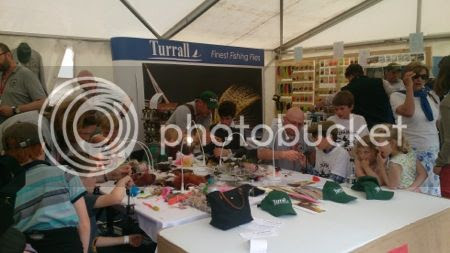 Talking of childish things though, I also recently had a great little adventure with Mark Everad in search of some smaller coarse fish. Some of you will already know of "Fishing with the General", but what you might not know is that Dr Mark first gave me the idea. 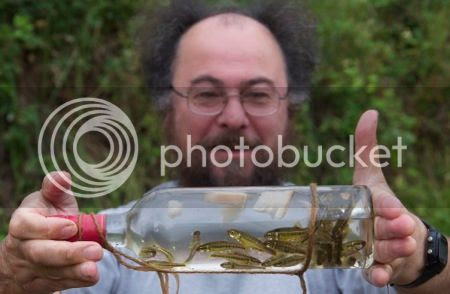 We had this idea of a crazy mission to hop venues and catch many smaller species- but I felt that someone as big and clumsy as me holding a gudgeon or minnow just wouldn't cut it. So I hired the General, for 20p at a car boot sale, and the rest, as they say, is military history. 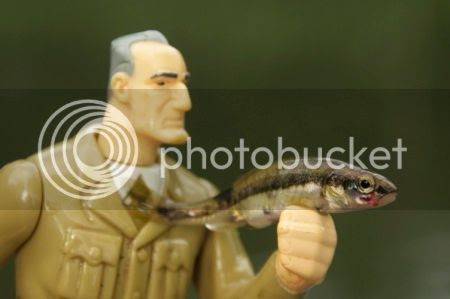 We had a really fine time of it anyway, jumping around small streams, village ponds and finally the very pretty Kennet and Avon Canal where it meets the Somerset Coal Canal. We had lovely ruffe, gudgeon and other species. The Doc also caught a lovely hybrid, while the General fought with Mark's 1960's Dalek and also landed some utter monsters. Proper fun fishing, with bleak, canal dace (a real rarity), perch, bream, eels and roach also joining the party. 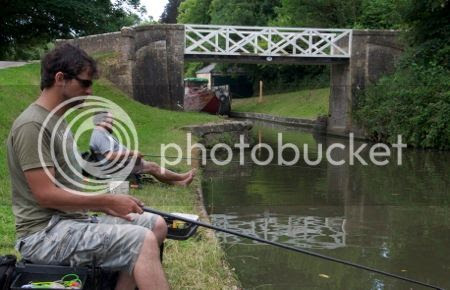 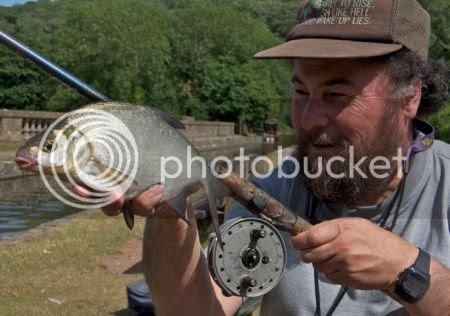 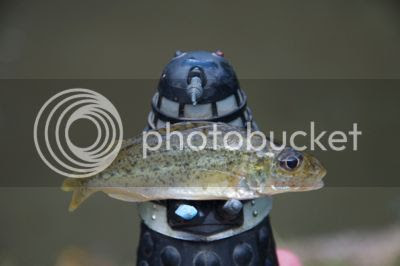 To be honest with you, sometimes I crave some simple bread and butter fishing. And closer to home, the canal is so near me I don't need much of an excuse to go and waste an evening. You know, a cheeky couple of hours that turns into four, perhaps with a pint thrown in. You can't easily fish down at the Double Locks, because the pub get funny, but take a little walk and there are swims that hardly ever get fished.

I also love it because I used to fish here as a kid, watching the bream roll on a summer evening. To my pretty amateurish approach at the time, they seemed like amazing, elusive fish. I caught far more eels than I ever did bream if I'm honest; writhing things that give you a satisfying fight but really bugger up your hook lengths.

This time I had no eels, but still tackled up tough on the pole (6lb rig, size 12 hook and strong hollow elastic), half fancying a tench or bream. I prepped the swim with four decent tangerine sized balls of ground bait laced with caster, chopped worm and a little hemp, and fished over it into some 12 feet of water just into the central track of the canal. Exeter Canal is bloody deep, for those who don't know it.

I had a string of perch first, before roach arrived. I'd already had a couple when the next fish started behaving strangely on the way in, suddenly pulling sharply towards me. I soon saw the reason why- it was panicking at the large pike following it. In a split second I saw a real alligator head lash out and the fish went plunging away into the middle of the canal, elastic absolutely streaming after it.

I never play the prima donna when fishing, preferring to let passers by get on with their cycle or dog walk or whatever. But over the course of about six tense minutes, a small crowd started to loiter, paralysed by the sight of the stretched elastic and wickedly bent pole. There were some proper football crowd noises from a bunch of rowers including the terrible advice to "reel it in" (what, on a pole?). There was an audible "oooohhh!" when the fish came off, but I was almost relieved.

That killed the swim for a bit, predictably. But after a top up with some chopped worm, I really fancied the last hour of light for a bonus fish of some description. A head hooked worm on a twelve led to a better stretch and something nice and weighty. 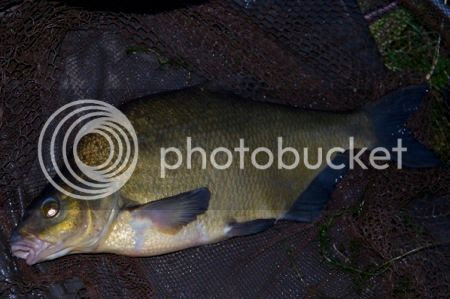 A very nicely proportioned bream of four pounds or so anyway, and that all important bend in the rod. Sadly though, these evenings are not so common at present as I chip away on my next book. It'll be a collection of some wild new stories, along with the very best bits and some secret gems from the past decade or so of words. I also have Sheffield artist Lord Bunn collaborating on the artwork. Here's a sneak preview with an early draft of the cover: 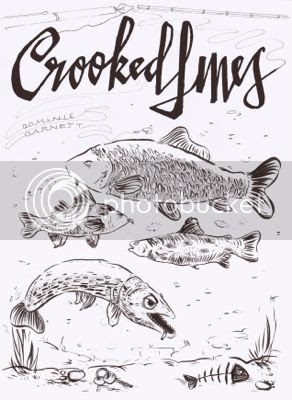