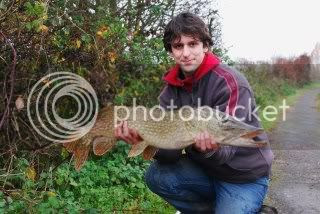 At last, a fish to repay many hours of numb toes and misplaced hope! A case of one bite, one fish- this one came from Exeter Canal, a tough nut at times, and took a whole herring.
AT times, I start to think that specimen hunting is a form of self inflicted torture- selective fishing is slow fishing more often than not and for me, not the be all and end all. When a plan finally comes off though, it's very satisfying. This 18 pound sample was no dead hearted winter fighter either- some hairy moments as she was lightly hooked (I never delay striking even with fairly big baits) and also intent on reaching submerged branches. My heart is still slowing down from the buzz.
Perhaps the biggest joke is that todays swims were very much plan B- I had fished them unsucessfully on a recent morning off, but really my hand was forced by finding my prime, more remote target area disturbed and heavily coloured up.
So, a hard won, very satisfying pike. What a massive head too! These canal pike can be really solid, impressive creatures, if a touch less elegant than river samples. Best of all, she was only very lightly hooked- the one treble she was attached by virtually fell out once she was landed, and after a quick snap or two she went straight back, almost untouched! If only every cold weekend started like this...
Posted by Dominic at 09:26 No comments:

The wind bites, the fish don't

A strange week for me. Lots of fishing, but only because my work rota has more holes than a packet of polos. Better than moping around at home I guess- but no less than three sessions in a row have been dissappointingly slow-come-useless.
Ok, so I sometimes aim for a big result and you have to accept that sometimes blanks are a fact of life. Earlier in the week, big commercial fishery perch proved elusive, whilst two shots at the Taunton to Bridgewater canal have been surprisingly quiet too. Its amazing how in fishing a stretch of water can be so productive one session, so utterly dead the next- confounding our best laid plans. Perhaps in all honesty I have failed to follow up my initial success on the canal, which is admittedly a part time haunt for the odd spur if the moment trip. I have yet to beat the fifteen pounder taken on my first ever visit almost two years ago. Sensible types would probably be elsewhere, but I have a thing about canals you see; they suit my long legs and restless nature.
So where am I going wrong? I thought I had found the perfect area- a little boat yard, teeming with fodder fish. However, everything from decent sized deadbaits to wobbled roach and even throwing a few lures around have seen nothing break the stalemate. Around two miles adjacent have also been searched, with one jack to boot, not much longer than the lure it took. Plan C this weekend is most definitely the pub. Sometimes you really can try too hard- far better to have a break and return fresher.
Posted by Dominic at 09:44 No comments: 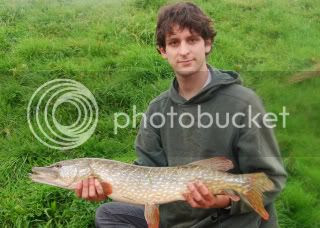 Jeez, what a weekend. What a tough, time consuming weekend. Out in the Cotswolds, the pits really were the pits for many, many fruitless casts. The frustrating bit was that previously good areas yielded, well, zilch to cut a long story short. Two malnourished jacks apart, it was an exercise in futility- but that's pit piking I guess. Testing stuff- but always the chance of something special. And that's why we put ourselves through it, I guess. So many casts and steps covered. That finely balanced equation, huge elation at one end, just dog shit and dissappointment at the other.

Still, I can still catch them on the city stretch of the Exe, as the picture shows! One of three taken in a short session, this one went just over ten pounds. Seems to be the story of the season so far- the lazy afternoon produces after the hard luck story of the long hard slog. So, no beast this weekend, and it seems again that sometimes the easier you take it, the easier you get it.
Posted by Dominic at 12:44 1 comment: 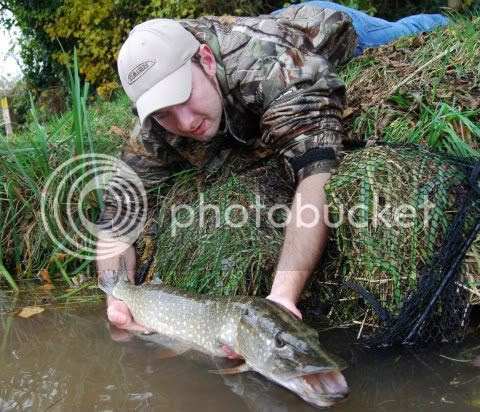 What a brilliant pike session with Exeter Angling Centre's Jim Moore this week, using a favourite tactic of his (and one I've "borrowed" from the lads myself)- scaled down drifter fishing. Using small suspended baits and letting them search the water in the natural tow and chop is simply a deadly tactic and Jim proved it.
Perhaps the only trouble was, I was on writing and camera duty and thus just an interested spectator. The day was not exactly hectic, but three fish were taken, including a cracking 11 pounder. A great result for a small canal- but I'm afraid the full story will have to wait for the Angler's Mail, where you'll also witness the benefit of yours truly freezing his backside off, wading into an icy canal to get some pleasing images, like the pic above. It's very difficult to get decent action/ netting shots when in the water on a spur of the moment- so rather than stressing the pike out any more, I went for some release shots. Once again, I can only credit Jim's example with this- this pike, a 7lb sample, fought really well and so he took the time to hold it upright and let it recover. Incidentally, all Jims fish were landed with JUST ONE TREBLE. With smallish baits, the pike tend to grab the offering whole and with just one size 4 or 6 treble he only lost the real tiddlers.
Posted by Dominic at 03:32 No comments:

Winter fishing means a fair amount of time on the canal for me. Unfortunately this can mean rubbing shoulders with some pikey types, and not in the fishy sense. I am never one to look the other way when anglers are clearly not following rules and have made a point of checking club licences of late. Pike fishing time is the worst of it too. You know the score- flashy lures bit no wire trace. No unhooking equipment. Landing net that wouldn't handle a goldfish.
The point is not to have a go, but to protect fish stocks and educate. Three local lads I met on Exeter Canal in their early twenties were just plain dishonest though. First I got the classic: "Left my license at home"- to which I give my customary: not much good there is it mate? Worse still, pathetic unhooking gear and net. Lie number two: "the tackle shop said this gear would be fine". Er, no. I know the staff there and perhaps their number one bugbear is clueless anglers who skimp on kit and don't respect their catch.
Thank god they hadn't caught anything- one got slightly irate, but I just calmly told them they couldn't fish until they had their licences. Off they went. On days like this, I'm glad I'm 6 foot 5 and 16 stone. Amazingly, they ranted about "bloody poles" before walking off.
The next angler I challenged, by sheer coincidence, was one of our much maligned Polish guests in person. But what a contrast; he was friendly and had a license. We spoke a while and I gently raised the subject of eating fish- at this the young chap pulled a face. "I hate the taste of fish!" he said.
We are very quick to judge and see things in black and white in this country. I have no doubt that some immigrants flout rules- but do we exaggerate without direct experience? I would certainly rather share my local patch with Piotr, rather than the trio of yobs I'd met earlier. But I'm not allowed to say that, am I?

On a brighter note, I'm enjoying autumn very much. A few pike are showing- although its slow going on the mornings I've sneaked before work. Some nice results have also come from recent photos, the following snap came from a day on the Lyd with Paul Hamilton: 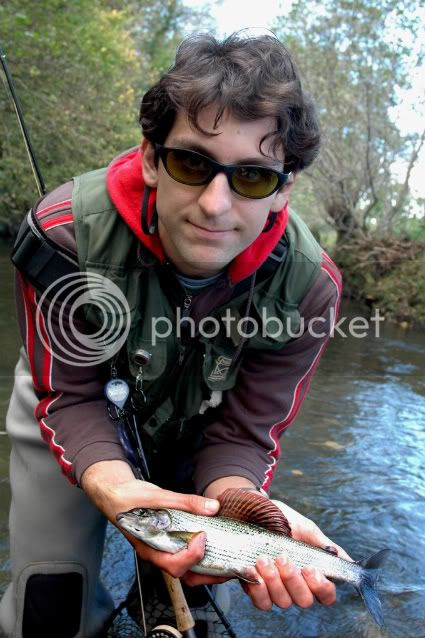