Something for the weekend, sir? 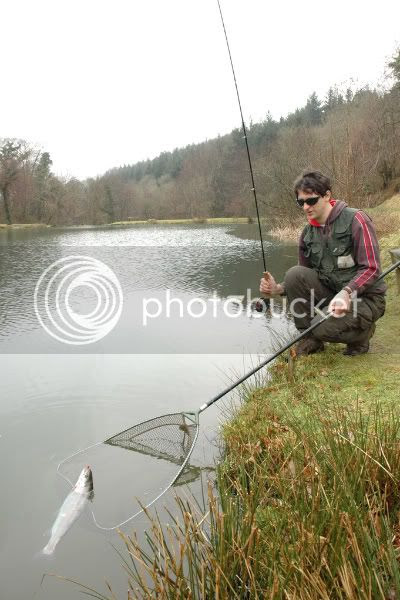 Back to the trout fishing this week, and a visit to a deserted but scenic looking Newhouse fishery near Totnes. In typical fashion the met office were wrong- should have been a beautiful day for pictures, but turned into a drizzly mish mash. Also beaten to the lake by a cormorant and the pressure was on to catch some fish for the lens of Paul Hamilton, although we spent a fair bit of the day taking shelter in the fishing hut and putting the world to rights- a fitting enough thing to do in the rainier hours.
To complicate things further, I was looking to catch on specific tactics, using a pattern I have come to fall in love with on small waters; the Rubber Legged Daddy.
Not exactly realistic, but great fun to twitch, pop and tease to visible fish. The main chances were purely oppurtunistic, flipping these home rolled beasts to passing rainbows- after about an hour I got the first satisfying wallop- you can get terrifically agressive takes on a twitched daddy. 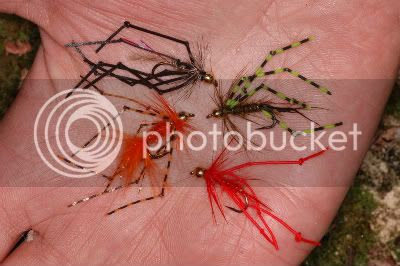 The fish were patchy for a time though- and it was only by moving swims that more bites came, a switch to a simking line doing the goods at the dam end of the main lake. One more rainbow stuck, a typical two pounder, with a couple of others coming off. Hardly an astounding day, but enjoyable still- certainly a scenic fishery and we also admired a few surprise ghost carp cruising the margins. Perhaps a dry might even tempt these as well as the resident trout come summer?
Posted by Dominic at 13:46 2 comments:

With temperatures threatening to break into the realms of normality, the fly rod got a quick pike outing for a quick work session this weekend. I was especially keen to show how much fun the method could be to the youngster I took out to Tiverton Canal. Funny how pike venues can vary so greatly- but Tiverton is so reliable for pint sized pike. The lad had a jack within ten minutes of setting up lure tackle- before things got much tougher with the passing of a barge stirring it all up.
Whilst lures give you some vibration, its definitely time for the fly fisher to switch to an ultra bright pattern, so on went a suitably gaudy substitute, the Tango:

a few casts later and the first nip was felt- followed by a titanic pike of, oooh... all of a pound! Never mind- a fun hour and a half of snaggy spots, hairy casts and jack pike followed. We had a contest to see who could land the biggest stick, marvelled at the ridiculously violent takes of the smallest of pike and in general, I enjoyed being a big kid for a spell.
Posted by Dominic at 06:27 No comments: 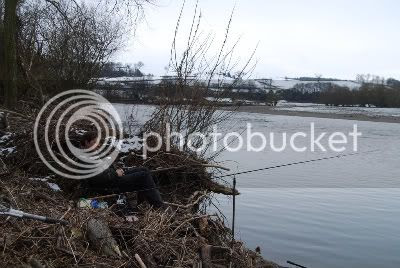 Whilst I can put up with most weather, this winter has seen some unbelievable conditions. With perfectly miserable timing, my big plans for a three day fishing expedition to Chew and the River Wye were pretty much snowed off. Day one was meant to be a maiden voyage to Chew. Meant to be, but wasn't. we got around half way before the snow was so thick you couldn't read any signs, the motorway was turning white and the warnings got worse. Even the locals were turning back. Bollocks.
So, instead, we spent day one with the good folks of Stroud, sledging down hills. What follows has absolutely nothing to do with fishing, but I was amazed at the sheer number of different "sledge" substitutes being used by locals. A quick Summary follows:

difficult to steer.
Bin Liner: The poor man's sledge. Just about works, but beware of backside chafing.
Drinks Tray: Requires a small posterior and a high degree of balance, but surprisingly quick!
Plastic Sledge: These had all but sold out. Rather small, but quick as you'd expect. Hazardous over bumps though. "Sleigh riders arse" can result from inproper use over obstacles.
Seed Tray: Smooth and fast, if hard to steer. Brittle and easy to snap.
Car Bonnet: Very fast, room for several daring/foolhardy persons.
Rubber Dingy: The runaway winner. Ours hit ridiculous speeds and we found it's inflatable sides and base a brilliant shock absorber. Sadly it popped after a particularly hairy run.

The next day, snow was replaced by horrendous ice. Stroud Council had left residents with a DIY approach to gritting- ie: leave a full box but don't use it. So there we were, gritting our way out. Next obstacle was actually getting to Wales. Unbelievably, people were still tailgating and speeding on the main roads! Makes going down a hill on a car bonnet look positively sensible!

We had a slow first day at Llangoed- only small grayling and the odd skinny trout responding. Little more to add really- extremely cold. Then spent the night getting woken up by Welsh piss heads in a little Welsh townen; generally what you come to Wales to escape from, ironically.
Next day, in the slightly slower water downstream on the Wye however, I at least got a couple of runs from the pike I was looking for. Even the pike were taking time to respond, giving only slow bites. I took a brace, the better of the two at 9lb 7oz. A nice, plump fish but to be perfectly honest only a fleeting bright spot in a monstrously dissappointing weekend. Where next? Siberia? Iceland? 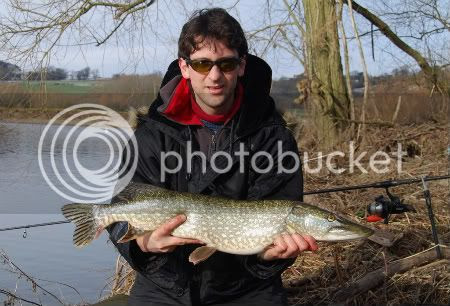