Waiting for the Sun 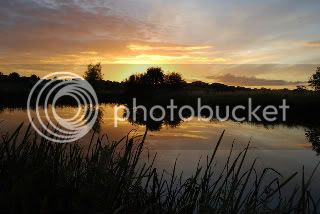 What an appalling summer we're having. Yes, dour weather is often better for fishing, but you can only take so much grotty weather. With the rivers high and dirty, it has been a case of sticking to the safer option of lakes recently. Carp at least don't mind chocolate coloured water.

Creedy is normally a good bet on a short afternoon session- and if you're one of those radicals who doesn't pile in the bait and sit behind three rods, the top pond provides some nice surface fishing. Not easy, but rewarding- I had a short bash and managed a common of just over pounds, losing another. These carp really do need coaxing to feed and require a careful approach.

Dart's Farm was next and surprisingly tough. In fact, despite a rough, surprisingly very cold night (I never sleep well night fishing) and waking up looking like a tramp, I got the sum total of one line bite in twelve hours. That's the addictive frustration of fishing though- using identical tactics on a previous visit in not dissimilar conditions I had two good fish. The time wasn't wasted though- I noticed a lad busy casting a huge sea fishing float around with thick line. Let's face it- we all start somewhere. Rather than getting annoyed at the disturbance though, I thought I'd try and help. Swapping the shark gear for the smallest float he owned and using a small barbless hook, he was soon in business catching roach. The result was one very happy kid and a much quieter pond! I'm no good samaritan, but I do wonder why we're sometimes so slow to help beginners. Despite being fishless myself and looking like I'd been sleeping on the streets of Moscow, I went home with a warm glow inside.
Posted by Dominic at 10:35 No comments: