High hopes and great plans are well and good. Better still when they materialise- most of the time the script gets torn up and lobbed out of the window.
We made our cold crossing to Wales in great hope, admiring the snowy hills and swollen rivers on the way. There were perhaps two garages open on the whole of our early journey out, but bizarrely we saw about six vans selling bacon rolls at the roadside- we're guessing that half of Merthyr Tydfil run a greasy food van on the sly.
Our target was perhaps the most casually run fishery in Wales (and I'll stop there before I produce steam), Llangorse lake. It was a dissappointment- day one looked fine but no boats were allowed out (no human beings were there to speak to either), whilst today we had access but it was positively dangerous- no fishing is worth drowning for. A shame really, because the lake is stunning. We should have taken our cue from the ducks swimming in the car park. 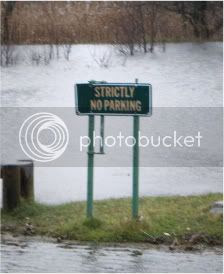 We did discover a very beautiful, if daunting, alternative venue however. Pontsticill Reservoir is a mammouth sized lake with scenery that knocks your breath back. Utterly lovely- although the place was surprisingly litter strewn (Brilliant idea for the Welsh Tourist Board: "Come Littering in the Brecon Beacons! Drop your non biodegradable waste in some of Britain's finest countryside"). We tried a few spots on the drop offs for pike, Ian Nadin's whole herring bait the epitomy of our great hope in the face of a kicking. No joy at all sadly- and apart from the scenery it was probably only the usual banter that stopped me from feeling despondent. 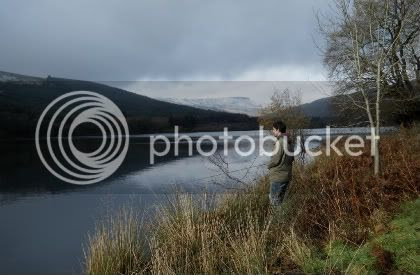 It's days like these that you realise what an addiction fishing is. We get up at stupid times, clock up silly miles and do things hardened drug addicts wouldn't contemplate, and all for that next bite. Winter fishing is sometimes a cruel sport, not to fish but to anglers. Often it's bitter, sometimes it's very sweet. Roll on next week.
Posted by Dominic at 08:37 No comments:

Flood water and a knackered car do not make great news for fishing. Still, these little obstacles have left me the time to get back to the tying vice. I usually start with the idea of tying plenty of practical flies that I'll need before long- then resort to having some fun and doing exactly what I fancy! 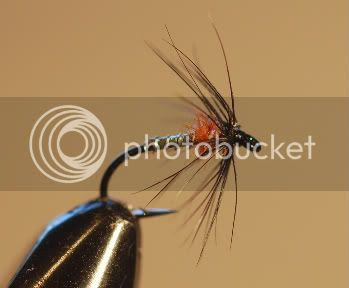 I do love spiders. Not the sort that scare girls though. The humble spider is such a simple blueprint; the possibilities are endless and they seem to work almost anywhere. Not many seem to rate them for still water rainbows, but they work a treat for fish cruising the upper layers. As above, I do like to include a dash of hot orange as a little target point.

Bright is not always best though- and I love the subtle classics for river fishing. What a shame it's such a long wait till I get to try them out. This one's a March Brown spider: 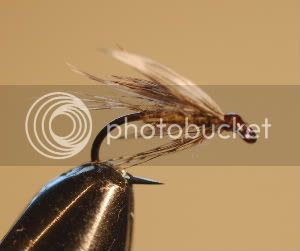 More pressing is the need for pike flies however, with a trip to Llangorse beckoning. Here's a classic red head pattern: 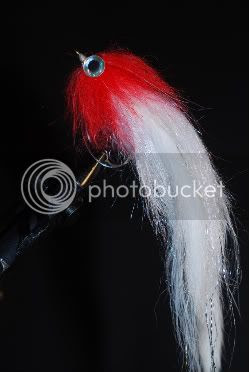 A Box Full of Jerks

After an excruciating midweek session where I mangaged to lose something weighty on the River Brue and then break down on the M5, I was looking forward to a trip to Exeter Canal to try to capture the Jerkbait antics of Steve Moore on camera.
Steve has a real passion for these monsters- a little chap with BIG lures! Some rough autumn weather made things interesting, although the fantastic colours of the season and semi urban backdrop made for some vivid pictures: 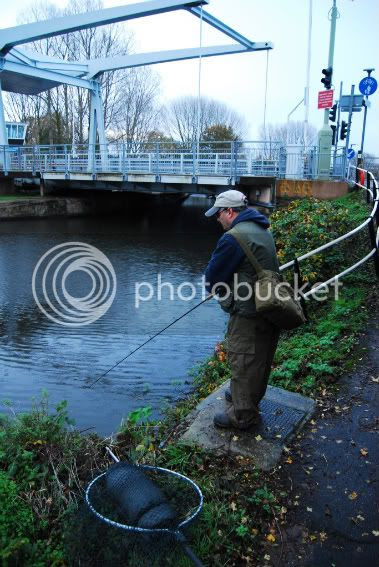 We walked far and wide, Steve throwing a mixture of rubber baits, shads and other magnum sized offerings into the right places. Biting winds along with the extra colour in the water from recent flooding made things anything but easy. When you think of it though, these high vis lures make perfect sense when fishing a deep water with extra colour- at least the pike will have a chance to locate the target. 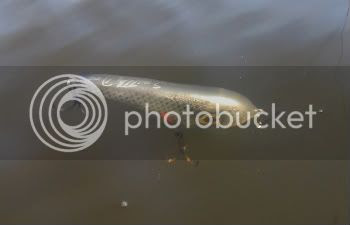 Exeter Canal can be a temperamental beast though (Rob Darby compares it to having a bad girlfriend: "you give her time, money and love and you get *£!$ all back!") and persistence was required. We did see a take or two from the jacks though- which evidently are not shy about grabbing a sizeable lure. 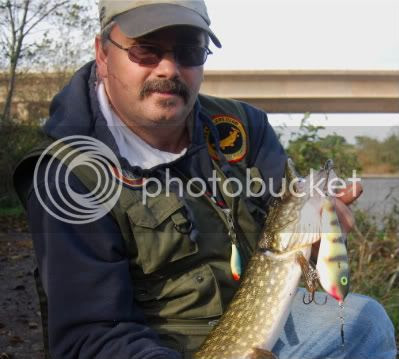 The bigger beasts were not playing then, although it was still a great day out. The canal seems extremely popular currently and as well as fishing pressure, this also means the odd unexpected bonus. I've seldom had a day when so many bits of tackle have been found on the bank, including a baker hookout tool, a float, a new Rapala Taildancer and, sadly, various bits of fishing line (anyone know why the stuff you find is always as thick as tow rope?).
Posted by Dominic at 01:20 1 comment:

The Battle of Bratton 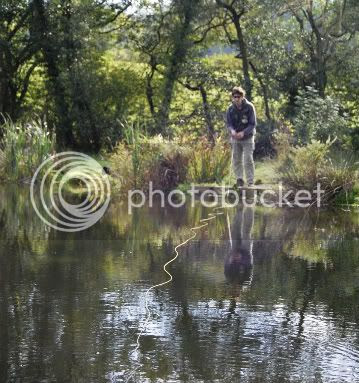 After a very wet river season you really do appreciate the consistency of stillwaters to get your fly fix. Bratton water is all a lake fishery should be: beautifully natural looking, dececent sized and with some cracking, more challenging brownies in addition to the usual rainbows.
After running a feature here, I just had to return to enjoy another day and try dries in addition to the usual buzzer tactics. Even so late in the year we were treated to hatching sedges and some explosive surface takes. A CDC sedge on a fairly light tipped was the order of the day and the method also proved a fairly selective way to tempt the brownies- we took four crackers between us. John Garnett had the best at three pounds plus, a fish that battered the dry and then did the same to a six weight. All of these were carefully returned. 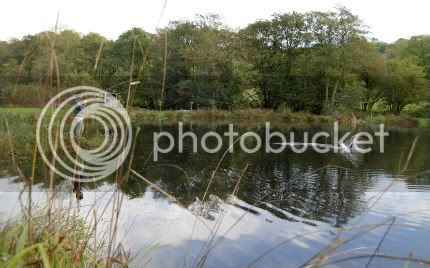 I was also pleased to meet fellow fly angler Mike Graham using one of Luke Bannister's beautiful cane rods. Having taken his bag on a Griffith's Gnat, he let me have a cast and I managed to hook and lose a solid brownie that looked every ounce of four pounds.
Even when the fish weren't rising, sport was still excellent on nymphs for fish cruising in the upper layers. Whilst unmissable takes are great, I do love the subtle draw of trout intercepting a buzzer or Daiwl Bach. Like lure fishing, it is the take itself which is so magically addictive. 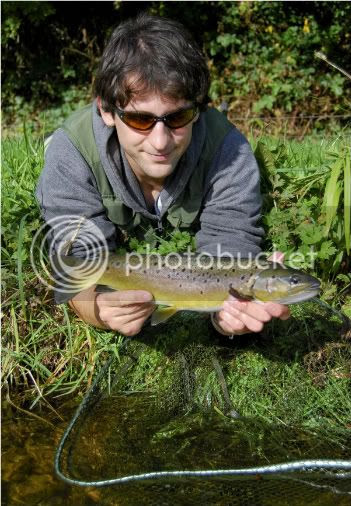 Credit is also due to Frazer McBain once more for his brilliant pictures.
Posted by Dominic at 02:50 No comments:

What do you call 3000 fanatics, a host of ace fly tyers & enough materials to fill a warehouse? The BFFI of course! What a terrific event this is- as well as stocking up on hard to find materials and bargains it was a real pleasure to meet so many fly tyers and characters from all over the world.

The tyers row itself was truly international- and what a range of flies! The work of German tyer Peter Joest was first to catch the eye. As well as great mylar fry patterns, how's this for a baby squid pattern for bass and other species: 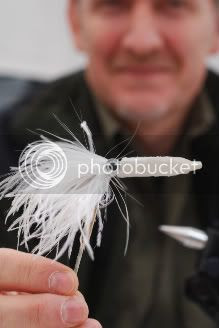 Other areas were full of cute and clever flies- some fiendishly realistic, others simple but irresistable. Plenty of faultless Mayflies- or how about this Mantis from Dutch master Paul van den Driesche?: 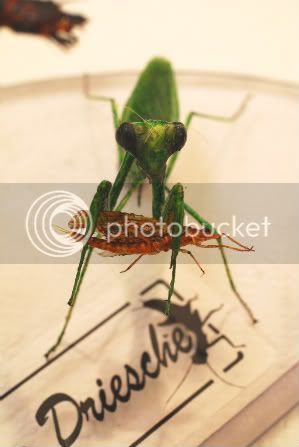 On a simpler but more practical level, here are two Stoyan Filipov preyfish patterns for big trout. Perhaps his simplest creations among some real marvels, but I loved these: 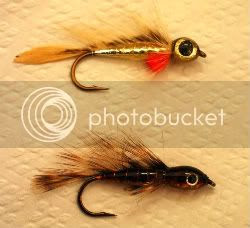 Another interesting stop was Chris Sandford's corner- and I just had to admire his antique pike flies, as well as other beautiful cased specimens. Chris was right by Waterlog publishers The Medlar Press, whose new book of "Great Pike Stories" was a must have- a real treasure trove of past gems. 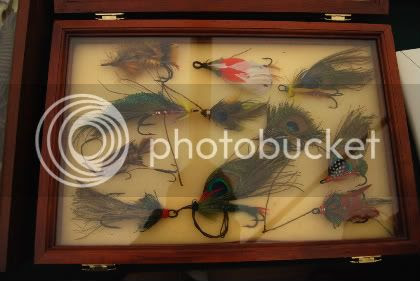 The Wonders of Wales

What a fantastic destination Wales is for just about any type of fishing you care to name. Along with the Westcountry Rivers Trust's Toby Russell and pro instructor John Dawson I enjoyed a quick fire tour along with a host of tourism and angling folks from Wales and Ireland.
The Wye and Usk Foundation have truly transformed fishing in the region in the form more access, better information and vast improvements in fish habitat. We saw new fish passes for Salmon & sea trout, beautiful rejuvenated rivers and other excellent work including their hatchery, which turns out some 230 000 juvenile salmon a year to give nature a helping hand. 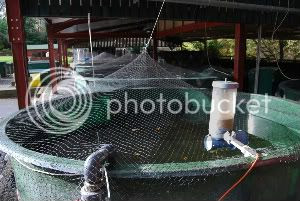 Sadly the rivers were much too high for any Grayling fishing- although we did have a dabble in a surprisngly pretty club lake near Merthyr Tydfil. We got no joy, although local legend has it that a hulikng great rainbow known to locals as "Charlie" (!)keeps breaking tippets and locals' hearts here. 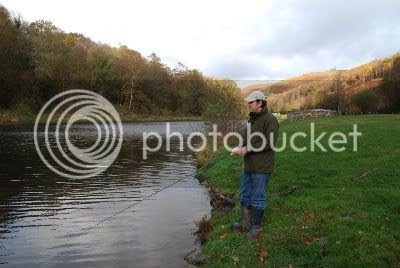 Above all it was great to see how passionate and forward thinking the Welsh are with their fishing resources here. And as for the Irish contingent, they were brilliant fun although some of their jokes were completely unrepeatable! I already have several plans set to "simmer" from the Welsh experience, and with so many committed individuals working for fishing here, the future has to be bright. 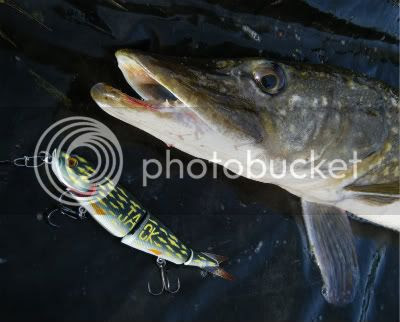 More muddy miles in pike country this weekend. With fellow drain hoppers Rob Darby and Ian Nadin, we enjoyed a day of narrow roads, poor directions and some unlikely pike spots. The Somerset Levels truly are an adventure; a land of rusting tractors, bizarre attractions (trip to the Peat Museum anyone?) and flooded corners. It's so rural out here that the yobs have to throw hay bails rather than trolleys into the local river. We must have tried at least four locations in the day- including a ditch no more than 18" deep! Amazingly, there was still the odd small pike lying in wait. 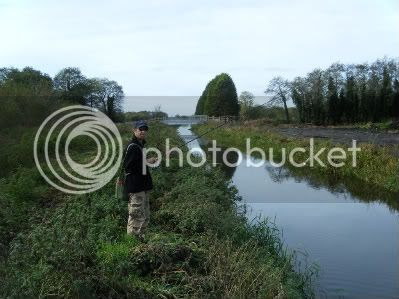 It was on the slightly larger bodies of water (ie, those you couldn't jump across) that the sport was best however. It took a while to find peaceful spots however- and currently there are alarming levels of very poorly equipped pike anglers at the access points- no nets or mats spell big trouble on these steep, snaggy banks. At least there's space out here though, and on both the North and South Drain there was sport to be had for those prepared to walk. Soft shads and shallow running lures still seem the best option in these weedy waters- and what a thrill it is watching pike tail the lure before making a savage lunge! We took over ten jacks between the three of us, up to around the five to six pound mark, not quite as big as one or two midweek samples taken on a morning off: 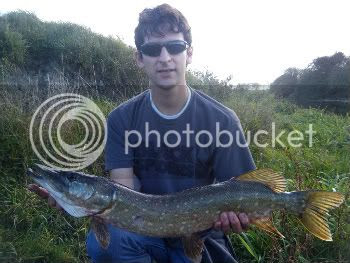 Excellent fun neverthelss and some top quality banter to boot. Certainly more fun than a day at the Peat Museum I dare say, which is surely a rival to Dartmoor's Paperweight Centre for the title of the South West's most spectacularly boring tourist attraction. 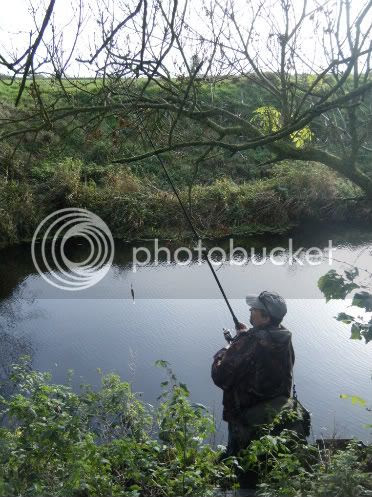