On Catching and Crashing 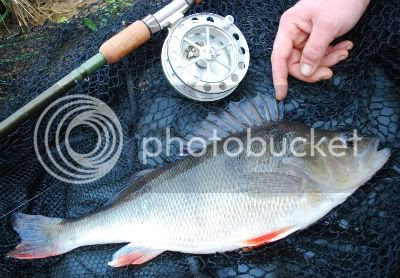 Bad luck, as the saying goes, comes in threes. I was hoping for a decent days fishing for my birthday. To be fair I got the first bit right; a car crash down one of Devon's shittier, twistier country roads plus a hospital visit were a less brilliant Birthday present.
But to return to the first, Stafford Moor was a very welcome day out. I've written before about the pros and cons of predators on commercial fisheries. But then again, this complex is anything but typical and I for one salute the owner's brave decision to include pike and catfish. Indeed, as our rivers continue to decline they could have a big part to play in the future and thankfully some forward thinking owners recognise that we want more than simply carp fishing. 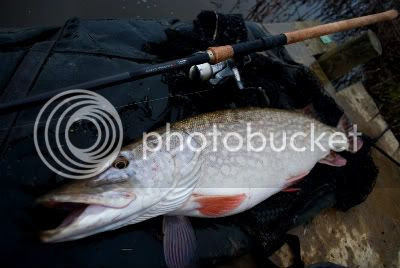 One good point about predator fishing such venues is that you can successfully mix tactics, with loose feeding for roach, skimmers and other species always liable to draw in predators at some point in the day. I decided to fish chopped worm on pole rig and running line, expecting decent perch whilst also adding a deadbait rod into the mix for a bonus or two. This worked well. When I wasn't catching skimmers and perch it was often because of pike presence and I landed two fish, both doubles, perhaps the highlight of the day a sudden surge on the surface, roach catapulted in all directions. Within seconds I had a tell tale run on the second rod. The pike haven't been here for many seasons, but with all the food present this could be a fishery to keep an eye on- although future success will also depend on how careful visitors are with these pike. 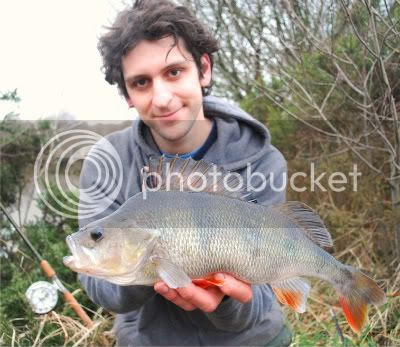 The real highlight was a late flurry with perch however. I had tried a small live rudd to sort out a better perch or two, but the killing tactic in the end was simply a worm over plenty of "chop", the better of two chunky fish at 2lbs 9oz. Specimen tactics are fine, but nothing beats light tackle and the rattle of centrepin against a lively fish is surely one of the greatest sounds in fishing. Perhaps a small live or deadbait might also work for these perch- but for obvious reasons a wire trace is a necessity here and I'm convinced this puts the perch off.
My crash came the day after, and about the only good thing I can say is thank goodness I wasn't badly hurt. But even a purely precautionary stretcher ride to hospital is a sobering experience. Even more delightfully, I had gone less than three miles in the hire car provided by my insurers next day when quite inexplicably the windscreen started to crack from the bottom up. More bullshit paperwork. More tedious phonecalls, elevator music and "your call is important to us". More parasites ready to bill you. In my darker moments I start to think life is simply a permanent wrestling match between trying to make enough money to live and having it sucked away again. Maybe this is why we go fishing? 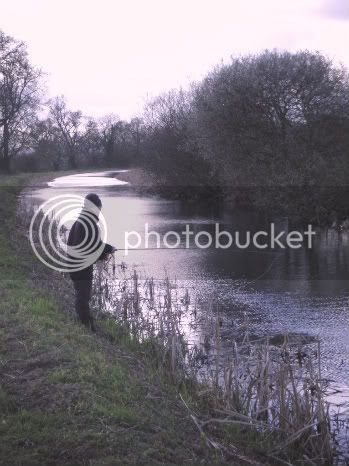 Some fresh air was definitely called for and I had the pleasure of taking fly fishers Lance Downes and Darren Hunt for a crack at some Tiverton pike. In spite of a lack of bigger fish, we had some fun along the way with outrageously clear water and cat and mouse style fun with the jacks, some titchy (like the little critter below), but all of them cute and endlessly intriguing to watch.

Crazy catch of the month definitely goes to Lance, who managed to catch a half pound roach on a small pike fly! Strange but true and it just goes to show that anything is possible in fishing. 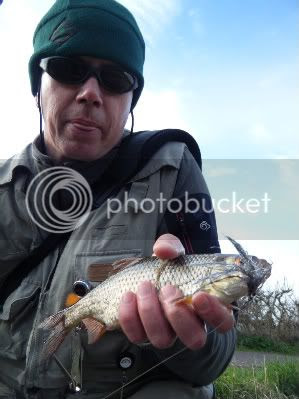 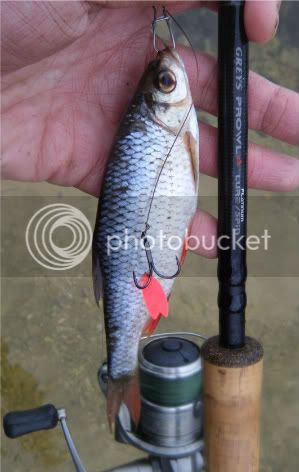 In the midst of the hectic business of earning a living (if only it was as simple as just going fishing!), I start to really treasure my fishing trips. Piking pole Seb Nowosiad is always good company for the longer haul- always well prepared with lures and baits, plus a nip of brandy to stave off the cold. He's also got perhaps the itchiest feet of anybody I've ever fished with- no bad thing when you have many acres of cold gravel pit to search. 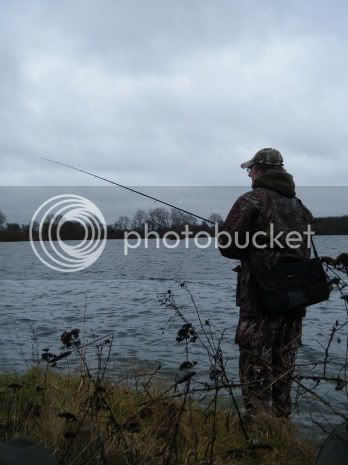 We had perhaps the best start possible with bites from the off and Seb's usual battle cry of "fishhh-oooonnnn!" connecting with several beautifully conditioned pike in the space of a mad half hour. To our relief, these previously hard to contact predators seemed to have moved into shallower water. Seb had the greater numbers to his trademark jigs, whilst I picked out the slightly larger pike using sink & draw tactics- this one probably not far off double figures. 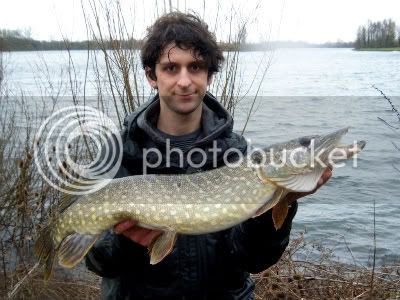 Night fishing for pike is not something you read much about, but we were also keen to give this a try. Hunkering down in a likely, craggy corner we set up baits for the night. With deep hooking a risk when you may have to scramble out of a tent to make contact we went for big baits, whole sea fish, to ensure nothing would be swallowed too quickly. The plan worked, if not emphatically, then at least to the tune of another three fish to the nine pound mark. 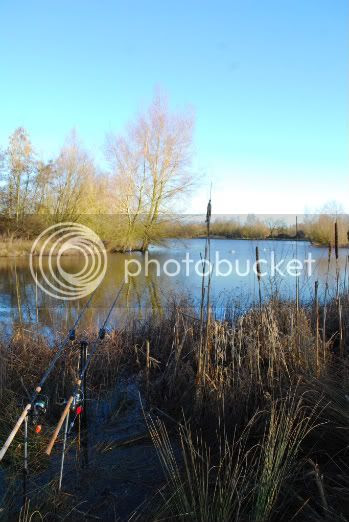 It got pretty cold in the night and the rain was utterly relentless. Hence a bright sunny morning and a fried breakfast were heaven sent! Never have black pudding, bacon and strong coffee tasted so damned fine. So- an adventure of hard fighting pike, good banter and high calorie foods. In fact all we were really lacking was a great big beast of a pit pike. But you can't have everything eh?
On a more serious note, I'm also drumming up further info and momentum against the current hydro power proposals, which could see already threatened fish populations nationwide in serious danger. Anyone with a spare five minutes could do a lot worse than give the EA an earful on this- or indeed email the minister for rural affairs who recently apologised publicly for massively unpopular deforestation plans. Don't let them do the same to our rivers! Emails should go to: caroline@carolinespelman.com

We want a careful approach and proper consultation- not botched schemes, rushed through for the sake of targets and easy cash for landowners.
Posted by Dominic at 09:31 2 comments:

From Wet to Wetter 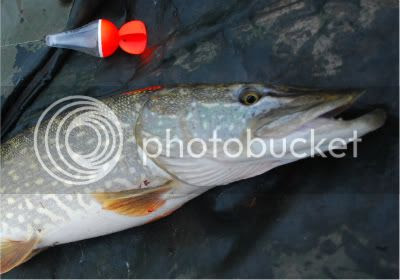 In fishing, there are things we can influence- but also things we have no control over whatsoever. And on that score, this weeks tale is one of foul weather. On a bright, still day the River Wye is like heaven on earth; on the wrong day, purgatory. And while I try to remain ever philosophical about fishing, it's hard not to feel disappointed when you've travelled a hundred and fifty miles with high hopes only to find gale force winds and a river rapidly turning ugly. 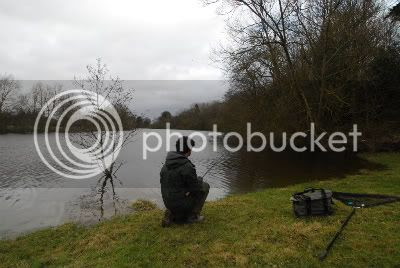 One pike was all I managed near Hereford on the first day and worse was to come, the Wye shooting up some four feet overnight. A rapid change of plan was called for in the shape of the Oxbow Lake at Letton Court (above). If nothing else it was scenic. A beautiful place to drift a float fished bait and at least keep the idea of a hungry pike in mind. No joy sadly, although there is a small irony in the fact that after this long haul trip, I had a decent pike in only two hours fishing just five miles from my front door! 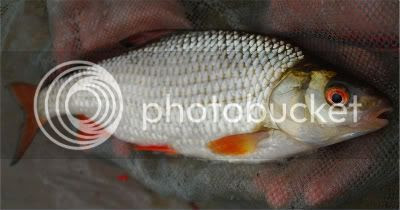 A day of float fishing for roach usually shifts the blues after the tougher task of monster hunting- but Shobrooke lake near Crediton was scarcely less wet or dreary today. The roach here are pretty, well conditioned fish. No big ones, but plenty of sport for Russ Hilton and myself to bread flake and maggots. I also put out another rod with a small boilie, which belted off just before dark. I immediately knew this was either a world record roach... or, you guessed it, a runaway carp. Not exactly planned then, but a strong and immaculately scaled double figure common. Not the biggest, but possibly one of the most beautiful (and undeserved) carp I've ever caught. 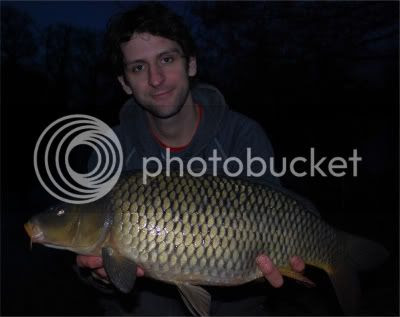 Notes from the Riverbank with Tarrant & James 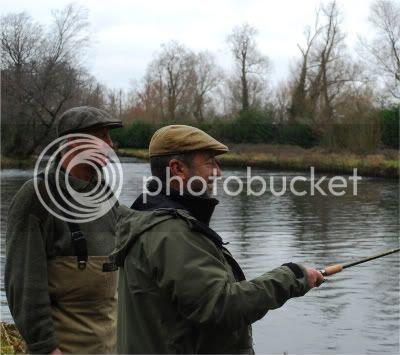 This weeks highlight has been a very surreal trip indeed. Going fishing with not only Bob James but Chris Tarrant is hardly your average day out. In fact, throw in the Nelson Mandela and the Irish Football team and you might have the start of a very strange gag. But there they both were, brewing tea and discussing rivers and roach, baits and methods. In actual fact though, fishing is a great leveller and once you forget the screen presence of these two characters they are simply a pair of enthusiasts who enjoy a day out. Well, almost! 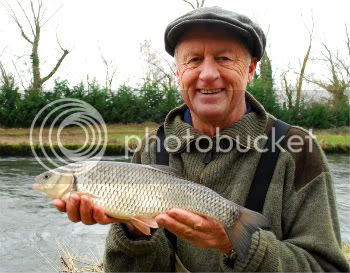 The River Test looked wonderfully inviting as always, but for me this was a day when words and pictures were the priority, rather than casting a stick float or swim feeder. Both these chaps have fished a vast array of waters, but the Test still takes some beating. "It's so beautiful you almost feel like a poacher" confesses Chris.
At the start of the day had wondered whether the two would act like perfect gentlemen or whether the air would be full of banter and gamesmanship. It quickly poved to be the latter. "I taught that Bob James everything he knows" was Mr Tarrant's opening shot. Funny that, because I'm sure Bob swore exactly the same. 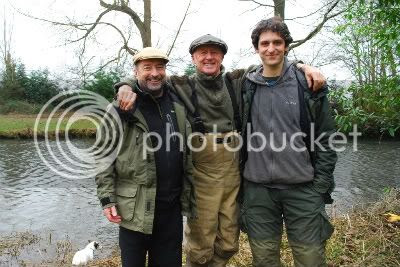 The day was a relaxed one for our anglers, a quietly frantic one for a writer aiming to capture everything from Bob's insights on river fishing to Tarrant's own love of the sport, from winter pike to far flung adventures overseas. Like me, he also spent a while as an English teacher, discovering that fishing was one of the few things to interest disaffected school boys. Talking of school boys, perhaps my abiding memory of the day will be these two trying to prod their hapless photographer with rod tips and grinning like they should know better: 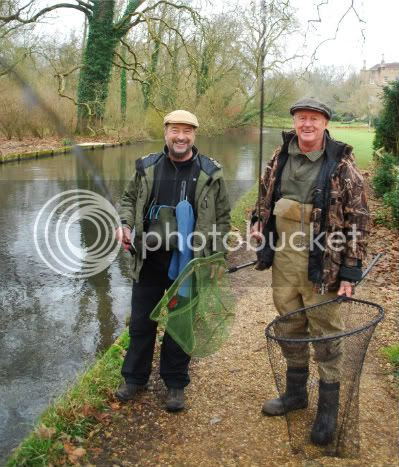 The Test and it's carriers are full of history and this day was no exception. By one of the Test's many beautiful riverside houses we saw a great eel trap, where in better days for the species men would work well into the night knee deep in the creatures. More strange still, we found a communal outdoor toilet with three neighbourly seats all in one little room. I thought this sort of thing was mainly confined to the Westcountry? Fairly disturbing! 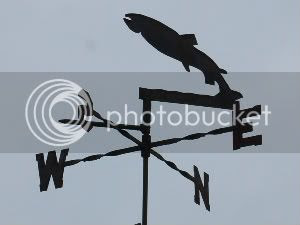 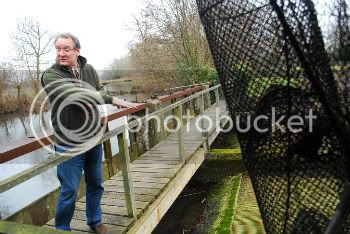 And amisdst all these distractions were beautiful dace and grayling, fine chub and some beautiful if accidental trout. I must say, Chris Tarrant held his own pretty capably on a day of many species and it was perhaps only Bob's late catch that won the day in the shape of a beautiful roach of well over two pounds. So, two stars, some truly idyllic waters and a fantastic catch; how's that for a day's fishing? 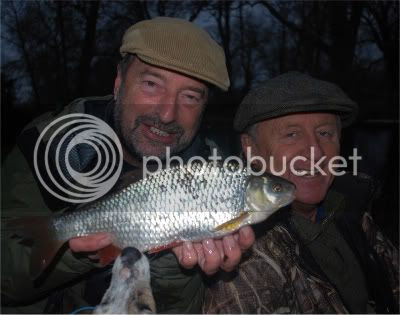