The Logic of Lures 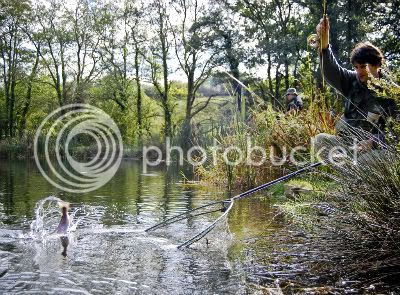 You know it's proper winter when you have to carve the ice off your car on a daily basis. After a few abandoned plans due to frozen waters things are slowly starting to thaw out and having lain about digesting the stone or so of christmas stodge I was itching to get back out to Bratton water and try a catch and release ticket.

No rising fish or hectic action on this occasion however and it really was a case of going through the card, from buzzers and bloodworms to mini lures. Strange how the plan that works one week can be close to useless the next! It was movement the fish seemed to want in the end, perhaps the best option when little is hatching, and the lures won out, with rubber daddies and small, glitzy lures finally making an impression for a hat trick of rainbows. 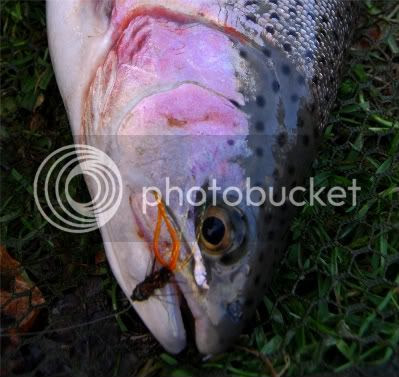 I guess I do find the slow sussing out of trickier days enjoyable in itself though- and even lure fishing can prove a challenge in finding the right pattern and retrieve on the day. For example, I spotted several cruising fish later in the day that would follow a big fritz every cast- but a fish was only hooked when a much smaller version was offered. Remarkably picky for "stupid" stocked fish! Today was one of those perplexing sessions when you get a fish on a particular pattern but then not a touch until something else is tried. Working on the answer is rewarding in itself though- wouldn't want it to be easy now would we?
Posted by Dominic at 11:32 No comments: 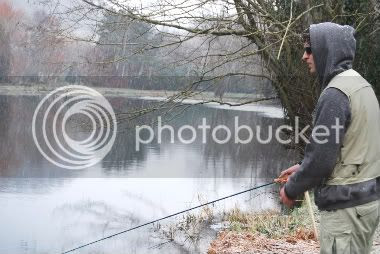 It's not always easy fishing after a big frost. Especially if your haunt of choice is covered with ice. Thankfully Blakewell fishery stays clear in all but the most extreme cold, although you do check your marbles when you read -4C on the meter.
Throw in some snow and you have interesting conditions. 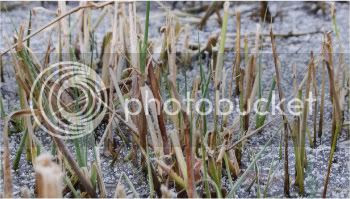 Lures seemed a good starting choice if only to prevent the line freezing to the rod rings. Just as the snow began falling I had a hit on a Woolly Bugger- which could also be a term for an angler covered in thick winter wear! Pulling lures isn't the most subtle method going, but watching a fish chase and smash the fly is exciting stuff in clear water. Unlike other species, rainbows seem to lose little of their fighting spirit in the cold either. 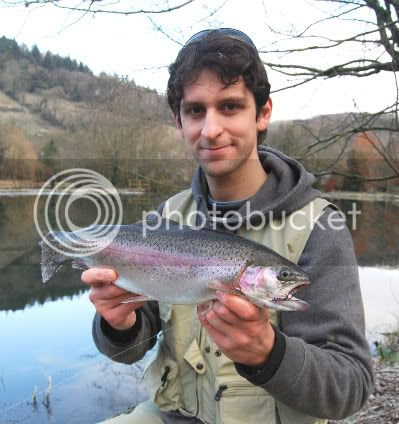 As the day warmed a little though, odd fish began to rise. For a half delusional moment I considered putting on a dry fly- looked like the fish were taking sporadically hatching buzzers. A Daiwl Bach fished no more than three feet deep did the trick- a subtler take and another less than subtle fight. Two fish for seven and a half pounds was a nice brace; the owner doesn't offer catch and release and so it was a done deal on the ticket, with some great winter pictures from Frazer to boot. Time to find a pub and get by the fire place! 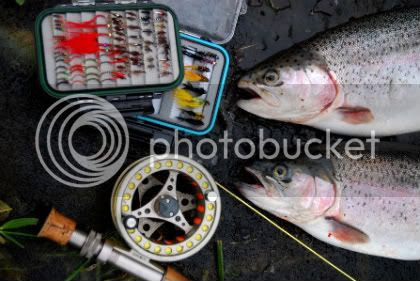 With a plan to ressurrect the Devon Pike Anglers Club on the go, this weekend was a great chance for a preliminary get together. Tiverton Canal seemed a good choice for a friendly match, the theme being two teams of anglers using different methods.
In the blue corner we had the lure boys (R to L: Dave Smith, Ian Nadin, Rob Darby, Lewis Palk) 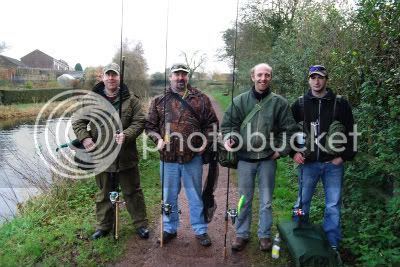 Next up, the fly guys (R to L: Me, Chris Gooding, John Garnett, Steve Moore) 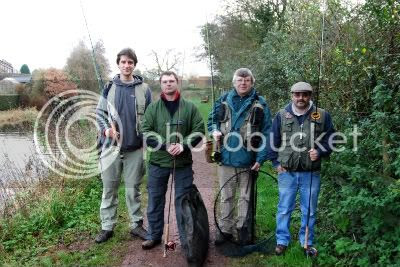 Despite both teams talking a good game, the canal proved tough starting out at Sampford Peverell. It was clear enough, but both teams struggled to get any interest. The fly squad were quick off the mark, not with pike but banter ("It's the lure anglers- they're scaring our fish off"). 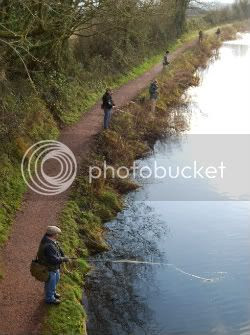 The lure team struck first though, with Dave Smith taking a welcome 17" jack. With Tivvy being generally stuffed with pint sized predators, we decided to measure fish rather than weigh them. 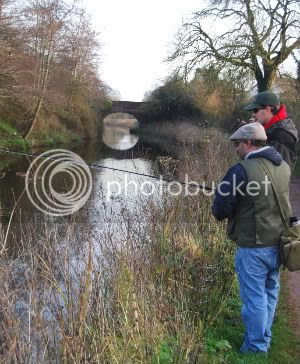 The first catch didn't signal the start of any dramatic action however, and it seemed that even the smallest pike might prove vital. Odd bites did follow, but nothing stuck, until I managed to close the gap for the fly team with a skinny little pike of 15". Game on! Finely balanced then- but who would score next? The lure anglers had already started harping on about their method being "more selective"- their fish being a massive 2 inches bigger!

Shortly the fly worked again though, this time for Chris Gooding with another 15" jack. Chris is a keen fly angler, but this was his first fly caught pike, making it doubly satisfying. Both teams were now casting with a vengeance- but still the fish proved reluctant and we seemed to hook more trees than pike!
Finally, after many metres of bank trodden the fly team went clear with a toothy little bugger of all of half a pound, before it was decided that it was high time we hauled ourselves off the cut and into the pub for a post match pint.
So, it was by no means plain sailing but the fly anglers pinched victory on a tricky day. Perhaps a slowly presented fly is as good a method as any when it's cold and the fish are inactive? Or maybe we just had luck on our side! Either way, everyone enjoyed a fun day out. A great gang of anglers, good banter and a nice little field test for a friendly match format- we stuck together, leapfrogging but making the rule that no one could stray too far ahead. Hopefully the next time we get out as a group the pike will be in a more cooperative mood. 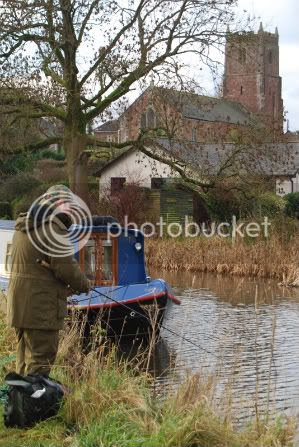 My love-hate relationship with Exeter Canal has been intensifying of late. A hat trick of blanks and then, just when you're starting to curse its cold waters, just when you wonder if it'll ever happen, along comes a BIG surprise! 20 pounds and two ounces of barrel shaped pike. 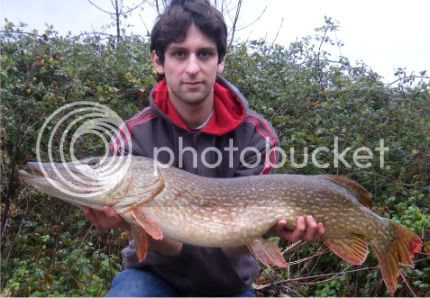 The blanks then, have not been in vain. I've been putting chopped rainbow trout to good use as prebait on previous visits, attempting to put the pike on a crash diet of the stuff. With so few catch and release trout fisheries I tend to end up with a full freezer and get pretty sick of eating rainbows- at least the pike seem to like them. This one certainly didn't look short of a good square meal!
It was touch and go playing the fish, a very tense affair as I could see the pike was only attached to the bottom treble ("Please don't come off, PLEASE don't come off!"). She came close to the net twice, suddenly lunging away again and producing that uneasy sensation of my heart and stomach trying to trade places. Fishing eh? Bloody hell!
The only downer to my midweek is that my motor is still knackered. I wonder if anyone can think of a good excuse for the car rental company to explain why their vehicle smells like Captain Birdseye's dustbin? Answers on a herring please...
Posted by Dominic at 08:07 No comments: