Fly Fishing for Chub on the River Stour 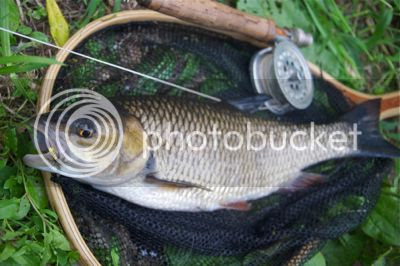 A new season trip to a familiar river brings both excitement and a little uncertainty to the angler. Will it be the same as you remembered? Will the fish be in the same places? I was hoping for classic river swims and aquarium clear water for my latest return journey, and I got it as I took Chris Kirkham for a guided fly fishing trip on the Dorset Stour.


Chub were our main target, although the river can and will also produce dace, roach, perch and pike on the fly. An interesting prospect really, because although it is a notoriously popular stretch, the fish don't see many flies.
It doesn't get a lot more classic, actually: think weed rafts, trees and gravel channels. Better still, craggy bits you can wade too and play a game of cat and mouse with the chub. These great fish also have a reputation for trickiness, with the regular fishing pressure making the fish notoriously spooky. 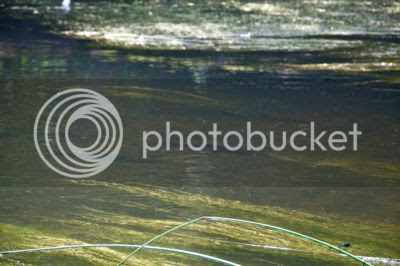 Although we were spellbound by the river, it made good sense to give Chris a quick bit of casting tuition. With chub it is a case of short, accurate casts without alarming the fish. His overhead cast steadily got better on the day, while he also quickly picked up side and catapult casts, so useful for ducking into tight corners.

What a sight the river was too. Bravely, having no waders, Chris waded in shorts and old trainers. I think he had one or two of those "ooohhhhh…cold…" moments, but actually, wet wading can be a nice exercise on a baking hot day- and this was a record shaker. 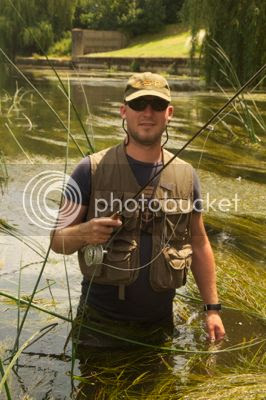 I'm going to be covering more on the subject of chub fishing in a feature or two, but both the fly choices and the antics of the chub are always something that fascinate me. They are so different to trout for one thing. They will often respond to a twitch, rather than merely a dead-drifted fly, for example. I was trying to reinforce this message to Chris, who then executed it nicely. We had found a couple of little pods of fish and after an early missed take they would rise up to look at the fly, but then turn away. The next time this happened,the fly began to skate a little across the current. A little twitch and those big lips opened. What a lovely way to break your duck for coarse fish on the fly, and very well fished. 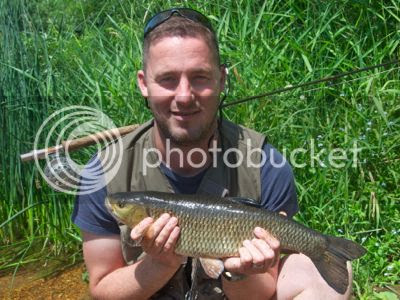 There were other takes and missed chances galore, and I was also glad Chris had booked just the half day, because it gave me the chance to get stuck in too (I don't normally fish when I guide, as a rule). So we took it in turns and spotted a real variety of life on a long walk. There were sensational numbers of damsel flies of many types, hordes of dace and even a large river carp.

And although the chub remained tricky, they continued to inspect and rise to our dry flies. We had a great explore, also casting for smaller fish and, in the case of the dace, often striking at thin air. Quite how a one ounce dace thinks it is going to eat a size 8 hopper is beyond me.
Speaking of patterns, we tried big hoppers, Stimulators and others from my Turrall chub selection, but the best was the Jasper (that's Westcountry slang word for a wasp). Quite why a fish that spooky finds such a big, gaudy fly appetising is a curious one to say the least, but sometimes the temptation just seems too much to resist. 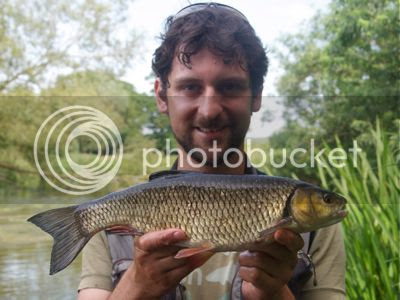 No world records on the day then(for that, you want "Fishing with the General" who, we heard, had an eighty-pound chub) but what a great day out. Should you be tempted to book me for a day's fly fishing for coarse species, whether here or my home in the South West, do take a look at the website. Actually, it also has some cracking flies for chub for sale too ;-) www.dgfishing.co.uk
Posted by Dominic at 06:56 1 comment: 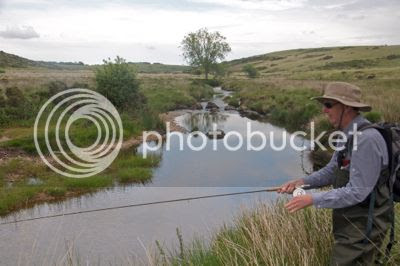 Still some of the best value wilderness fly fishing around at just £10 a day (try www.westcountryangling.com), Dartmoor is a beautiful place to spend a day roaming and casting. It also happens to be one of my favourite places to run guided fly fishing days for those new or returning to the sport, because the trout, while not often large, are certainly hungry and numerous.

Joining me for a ramble across Dartmoor was Nick, who is more used to coarse fishing. We stopped at the Two Bridges Hotel, where you can pick up a ticket and get straight onto the West Dart.

The terrain is boggy and quite up and down out here, so waders are very useful- and wellies are an absolute minimum. We could see lots of insect life, and in fact the dippers and wagtails were already picking them off as we approached the river. A particular delight were several of these Yellow Sally Stoneflies: 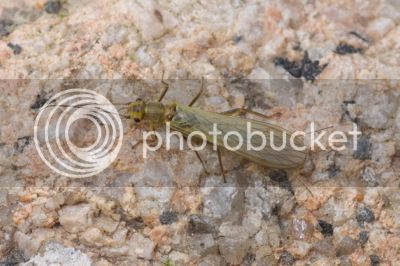 With the water level low and clear, I set Nick up with a light four weight outfit and a simply dry fly on a 3lb tapered leader. He had a casting lesson for the first hour or so and quickly picked up a tidy overhead cast, before we tried for a fish.

The fish rose rapidly for a small emerger, so rapidly I think Nick was taken aback and it was only a few snatches later that he managed to catch a trout. Most up on the moors are not big, but they’re certainly pretty. It was also a good exercise in watercraft and reading the river. Studying the little pools, bends and sections of cover, we did spot a few better fish, including one that looked about a pound. That one spooked, but connection was made for a few exciting seconds with another slightly better trout, just beside an overhanging tree. 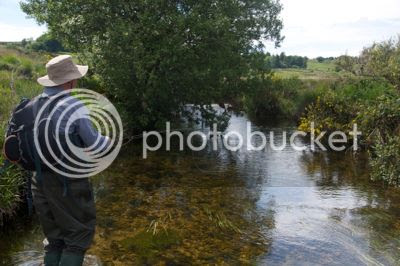 By the end of the day we must have had dozens of takes and several small trout, an experience that should hold Nick in good stead. Do take a look at the guided fishing section on my website (www.dgfishing.co.uk), if you’re interested in a guided fly fishing trip on the streams of Dartmoor. From a rambling all day adventure, to a short afternoon session, I can tailor something to your needs. You don't need any previous experience and I can provide all the gear for an enjoyable day. 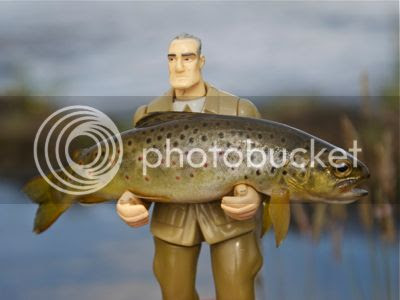 Naturally, we couldn’t hope to catch a trout as big as the General this week (above), but we’ll keep trying. You can read his continued ramblings on the blog and facebook page.
Posted by Dominic at 05:41 No comments: