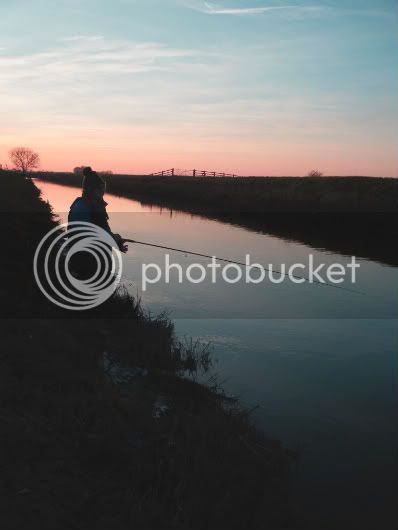 One of the greatest things of all about fishing is the friendships you make and the unscripted adventures that begin with pints of beer and shared enthusiasm. Having been made very welcome on the Severn in the past by Worcester anglers Jim Smith and Dicky Fisk, it was time to return the favour with a weekend of Westcountry pike fishing. The duo had certainly earned it after giving a cracking talk on Zander to the PAC boys rather deftly titled "Enigmatic Bastards".
I was especially keen to show the lads the Somerset Levels- if only for a view of the massive, beautiful open spaces and criss crossing, pike infested looking drains. Sadly much of the water was iced and the fishing was tough. We managed to winkle out a couple of jacks on slowly fished soft lures, but it was Dick Fisk who found the best method on the day, drifting roach deadbaits to land three nice pike including this fierce, finely marked double: 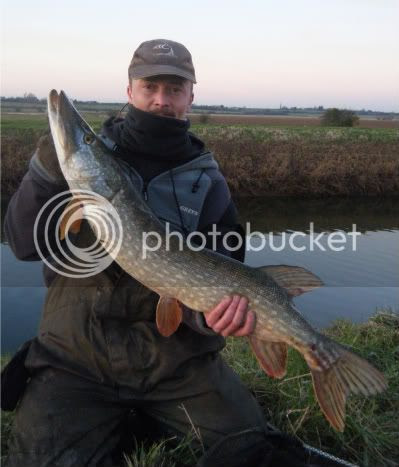 Truth be told though, this bitterly cold winter is beginning to grate a little. Exeter Canal has been typically tough, with yet another blank to add to the list. In fact, the main entertainment has come from the graffiti on view- or from the antics of that most splendidly enigmatic of all bastards, Mr Norbert Darby, skating his usual and perpetually thin line between genius and certified insanity. Who else, I ask you, could arrive on the bank with no lead weights but a couple of handy door stops in his tackle bag? Anyone who knows what use they might be, please do let me know: 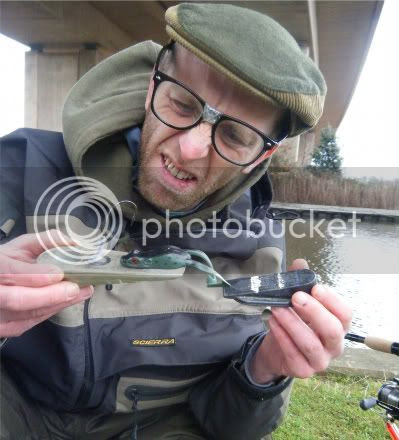 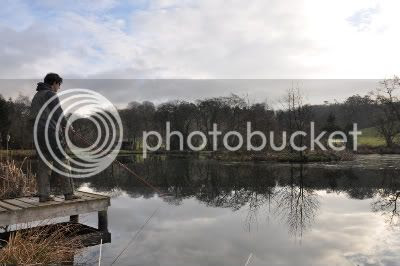 The rainbow trout of small lakes are easy fodder in the winter aren't they? Erm, no. Not always at least- throw in some ice, fluctuating temperatures and the reality of less frequent stock turnover and you suddenly get more challenging fishing. Not that there's anything wrong with a little more difficulty- and in fact this is preferable to the polar opposite scenario with stockies that jump on any fly in the box.
Bratton Water near Barnstaple is one of the more natural fisheries in any case- some fairly wily browns besides rainbows, plus a catch and release ticket available in winter spicing things up. Today was really a case of going through the card to find the right tactic. Mini lures are a real favourite when the going is tricky, for several reasons. The trout can easily take them whole, unlike the larger variants they're partial to nipping at rather than engulfing. Equally, the smaller fare can be presented slower, and in combination with a nymph if neccesary.
With half the lake still iced, options were limited. But after an initially poor spell, a move paid off with the sighting of a few cruising fish that soon followed small bright lures. Along with another caster, I enjoyed a hectic spell of hits and two nice rainbows landed and quickly released before the going slowed. Trout can be aggressive, yes but they're not plain stupid. 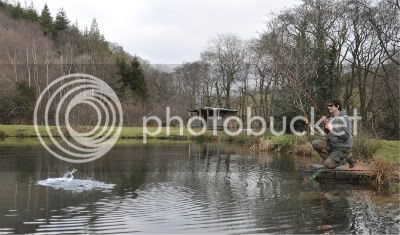 The ice began to recede slowly and the occasional rise was evident by lunch time and a balmy 8 degrees. The fish weren't chasing as hard, but were picking off something. A subtler approach worked, with buzzers or daiwl bachs working in tandem to pick off another few fish. Stand out pattern? Leon Guthrie's Satanic Buzzer, comfortably- time and again this is a fantastic little stillwater catcher, with just that extra something and worthy of far wider recognition- do either check out my "links" on the site, or google Leon Guthrie for more on this brilliant fly. 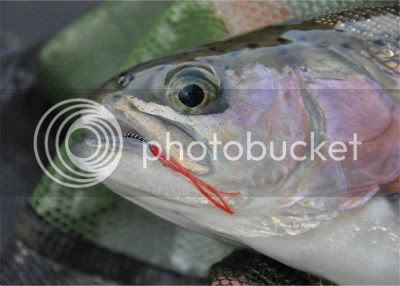 I'm also indebted to up and coming photographer James Callison for some excellent shots on a dour day. A good session then, but now I am feeling the effects of combining a week of early starts, late finishes, cold days and way too much activity: I feel as sick as a dog. Head ache, sore throat, a little feverish... in fact I'd best sign off before I drop off!
Posted by Dominic at 09:12 1 comment: 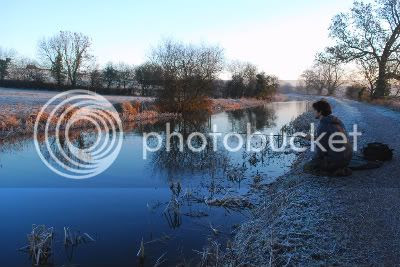 Somewhere between biblical style flooding and hell freezing over, the hunt for further pike continues this odd winter. After a muddy blank on Exeter Canal, it was time to return to Tiverton Canal if only because I am an impatient so and so and this little water is more pikey than Bridgwater Services. I had hoped to grab a photographer too- but with a no show it was the plan B of self takes. Even so, with a brilliantly frosty, blue and hazy pink winter sky reflected on the water it was difficult not to make the place look appetising. 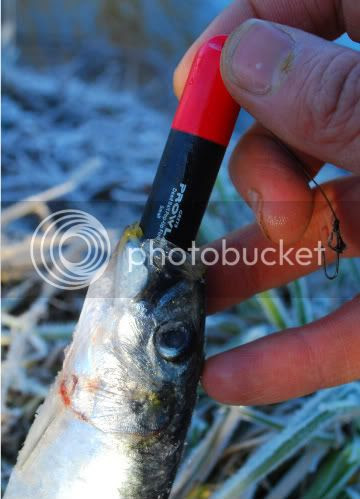 Sadly the pike didn't fancy the combination of murky water and freezing temperatures. Whilst there's no shame in struggling then, I do start to get fidgety and swear by a few tricks. The most obvious is to keep moving; when the pike aren't patrolling or active, new swims and frequent recasts definitely help. I also like to keep fresh baits however and chopping used offerings into a bloody mash helps to put down some scent and stave off despair and pnuemonia. 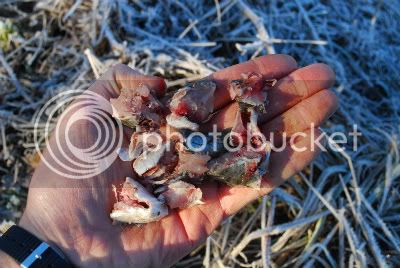 It's also well worth presenting baits differently here: even after a bitter winter, the place is still weed choked and I like to pop up a deadbait on one rod, whilst setting another bait shallow on a second outfit to gently drift (hopefully) into view of a pike or two. This way I can also watch one set up, whilst the neccessary evil of an alarm will warn me about any interest on the other rod.

Ian Nadin joined me later in the morning- and persuaded me to take a decent walk to another area after three biteless hours. A bloody good idea. In a lovely reeded length the indicator finally dropped and the line crept away. A welcome pike of around eight pounds was the culprit- and to prove our hunch that the fish were dormant the beast was festooned with leeches! Five minutes later, a pike that was almost identical save a little less fat also followed from the exact same area. Thank you pike! 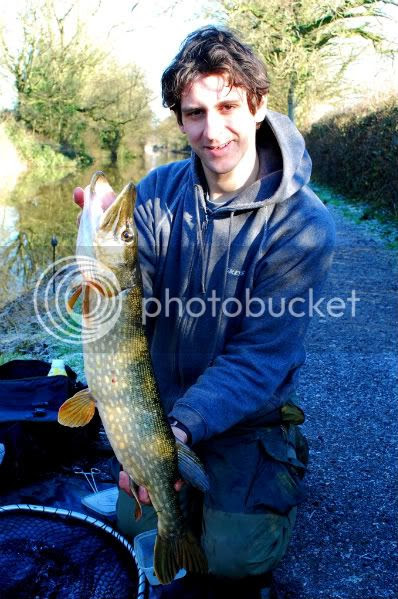 Perching in the Rain

A soggy Upton lakes on a sodden afternoon formed the setting for this weeks adventure. Hardly romantic, but this place has that definite perch aesthetic- shadowy corners, sunken snags and branches sticking out of the water. Russ Hilton joined me as we compared notes and tried very different tactics in the hope that between us we might contact something solid. 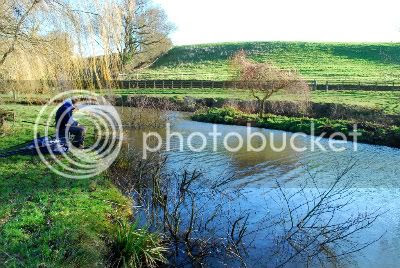 Russ kicked off with maggots and pole tactics, a reliable way to get bites from skimmers and roach as well as chunky perch here, whilst I fished larger worms on float tackle and set up a second rod to present small live or dead roach. "Compare and contrast" may have been the theme, but in actual fact match and specimen tactics can be combined nicely for perch and I always swear by plenty of "chop". It's free, it's easy to use and by heck does it draw in perch. 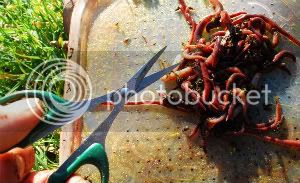 Perhaps the only drawback of worm is that it isn't so selective- even lobs catch small fish. Hence after a lukewarm start with just the odd skimmer I was keen to snaffle a couple of little roach to try. Casting these close to cover in a reasonable depth of water was the answer- three decent runs and two nice perch, one over the two pound mark which fought surprisingly well on light tackle. 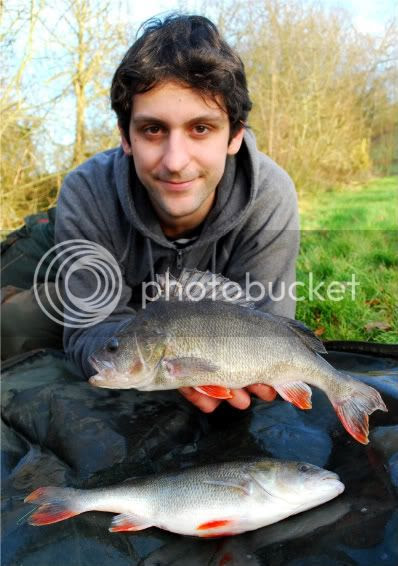 I love big perch, even the real bruisers. They always have that look about them- like ageing heavyweight boxers, heads big enough to swallow kittens. Impressive more than pretty perhaps. Meanwhile Russell snared several perch and a couple of handsome pound plus samples on light tackle and I still believe that the light approach has its day too. Russ has had several two pounders here on maggots- and doubtless there is an even bigger monster waiting somewhere.

On a darker note, the worst part of my week was saying farewell to Hiram Garton (who most of you will simply know as "H") from Exeter Angling Centre, who passed away recently. All I can say is that we have lost a one off and a real gentleman in Hiram- a kind, ever helpful presence in the shop and it will be strange after all these years not to see him there and discuss flies and fishing tackle. Most of all I think I'll miss his anecdotes and lovely, dry wit and humour. Farewell H, you were one of a kind and we'll all miss you very much.
Posted by Dominic at 04:49 No comments:

On the Test with Bob James 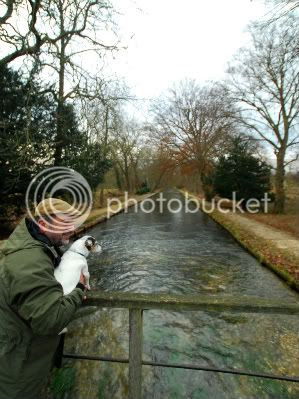 This week's relentlessly wet weather could do little to take the gloss off an outing featuring one of Britain's most distinguished anglers on the banks of the celebrated River Test. It's a far cry from Tiverton Canal, that's for damned sure. Although better known for its outrageously fine (and bloody expensive) trout fishing, this historic river and its carrier streams are also home to some cracking coarse fish, with roach a real passion for Bob. 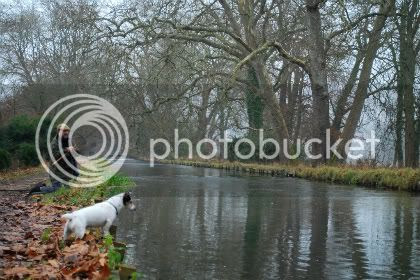 Besides my own presence on the bank, Mr James was also being filmed for part of a new series which sees him tackle a succession of idyllic locations. So much for pressure though- in spite of the dreary, tricky conditions his experience and humour shone through the drizzle. 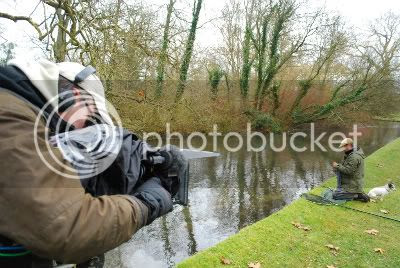 Inevitably for the Test, trout crashed the party at times. But eventually Bob connected with some flawless grayling, as well as fit dace and chub. But where were those roach? It wasn't for any lack of technique. Bob is in his element trotting a stick float, putting a new Hardy Marksman rod and 4" Centrepin through their paces (well, you didn't expect Bob to get his tackle from Argos did you?).

I certainly learned a great simply by observing. In fact, I believe that if I can impart even half of my own lesson here into some forthcoming material, I'm sure it'll be a gem for river anglers. In between shooting I even managed to do some trotting myself; the fish here are beautiful and a juicy chub was perhaps the highlight from the sort of swim I usually only dream about. 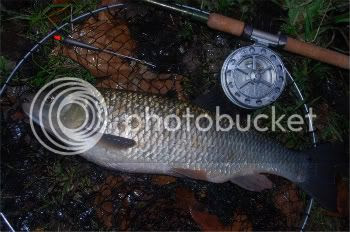 Back to centre stage however, the roach were playing hard to get. A move to the main River Test saw greater success with Bob's target species, simply beautiful roach of bright silver and impossibly red fins. And as for the finer points, well you'll just have to wait for the feature! 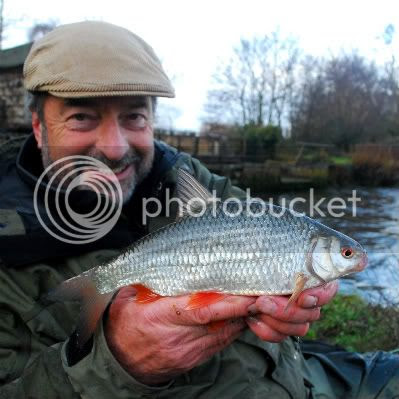 In several hours of rain I got the devils own soaking but still enjoyed every minute in Bob's company on a river that stirs the heart even in the doldrums of winter. Something to fill my daydreams perhaps next time I'm stuck in traffic on the "as seen in Crimestoppers" side of Exeter.
Posted by Dominic at 11:11 No comments: