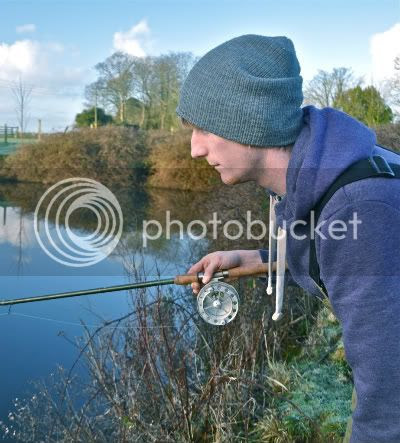 I've fished a few giant, awe inspiring waters in my time. Broadclyst Pond isn't one of them. One of those little pools you usually give only a passing glance as you drive past, Chris Lambert and I decided we would stop by and look for a perch or two. It was pretty, that's for sure. Other than lots of ravenous small rudd we didn't find much however, and so it was off to another pond to try and catch something that wouldn't slip through the holes in a landing net. 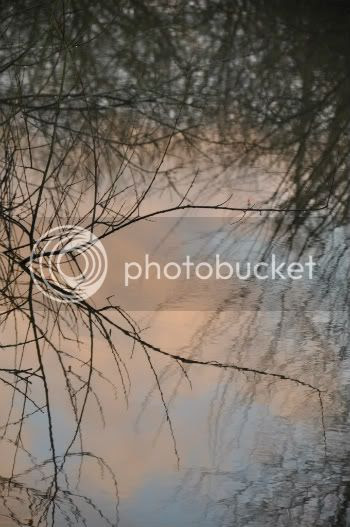 When the temperature bites and the banks get muddy, fishing becomes a test of patience and wet weather gear as much as anything. You can detect the subtle change in expectations on a tough day, in our case it slowly shifted from "great big perch" to "anything with fins would do." At least with smaller lakes you can usually count on a few bites and I've been weaning Chris onto the joy that is fishing with a centre pin (or some "straight up Chris Yates shit" as he puts it). 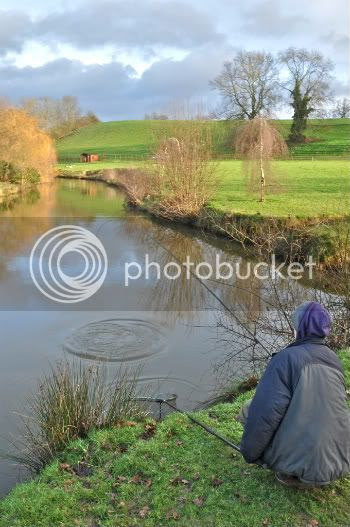 Ok, so it wasn't an outrageously big perch, but a rather beautiful mirror carp showed up, along with a golden winter common. My only results of the day came with the camera rather than a rod in the end. 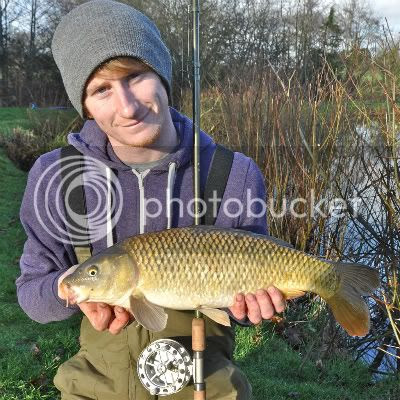 Elsewhere, it continues to be an up and down season for the pike. Besides one or two slow sessions on the Exe, I've also been back to the Somerset Levels. The rain continues, with muddier waters necessitating the use of evil smelling baits and feeder tactics. Traipsing a crooked route towards Glastonbury with me was Russ Hilton, whose excitement was palpable after his best pike so far of just under 14lbs. It picked up a whole sardine, before going slightly mental and making Russ shake slightly! 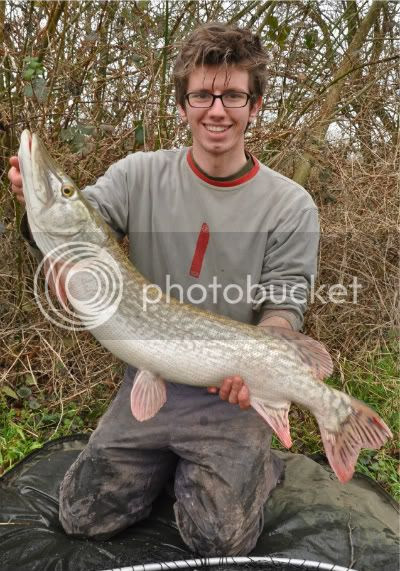 It's a Stick Up 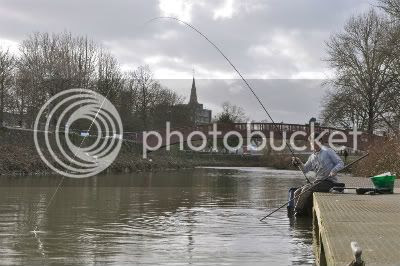 The words "free fishing" are enough to make any angler's eyes light up. They're not always accompanied by the words "surprisingly bloody good fishing" - but in the case of the urban River Tone that's certainly the case. Busy yes, but there are plenty of swims to choose from, and when you find a bite every other cast on a chilly, blustery day you know you're onto a good thing. A very good thing- in fact when I reflect on it, there are few more enjoyable ways to spend a day then trotting a stick float. The dip of an orange float tip quickly dispels any cold and I love the variety of a nice mixed river. My first five fish today were five different species- a pretty grayling joining a chub, dace, roach and trout. 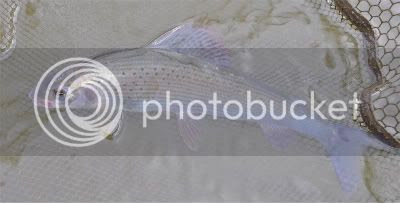 It's on a chilly, windy session you really appreciate the need to fine down and feed carefully. I took a while to find my rhythm and get the presentation just right, as it needed to be at times, with 2lb hook lengths and small, fine wire hooks the order of the day. Quicker off the mark was Russ Hilton- who had his stick float set up spot on for a steady stream of fish. There were some lovely trout in amongst the silver fish too, including this little beauty, a really mad mosaic of fine spots: 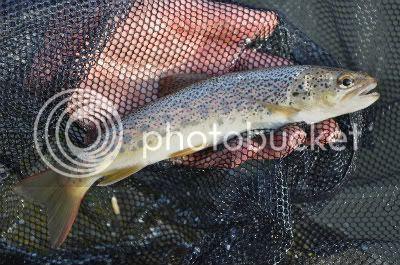 I'm already thinking I must return here in the warmer months with a fly rod for trout and chub. On what Russ considered a pretty "mediocre" day, we each had no shortage of interest. Not just from fish either, but the odd curious and accidental visitor. And that's urban fishing- for every loveable eccentric there is that shifty bugger covering the banks- or the one who spills out their life story to anyone who'll listen (regardless of whether or not you give a toss). Nevertheless, we had a blast- and if this is the kind of net possible on a "slow" day I'd love to see what the red letter version looks like!: 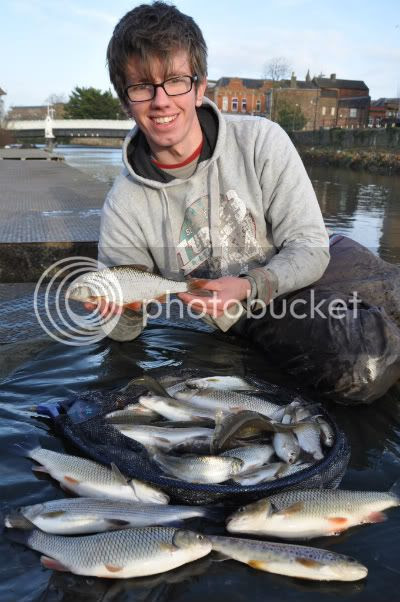 That little lot came readily enough before we hit one of the weirs for a change of scenery before sunset. A good move not only to capture some shots of the golden last light, but more dace and grayling in the faster water. I thought winter fishing was meant to be bleak? 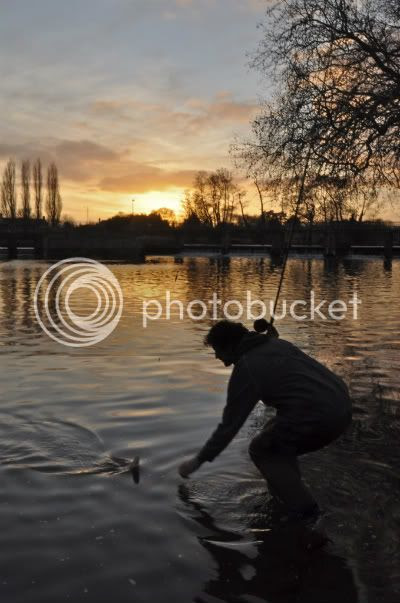 You can also find Russell's new blog on the "blogs I'm following" link- if like me you love old school canal and river fishing you'll enjoy this one. In fact, it's turning into a blog frenzy at the moment- Chris Lambert's "Fish Tales" blog is another one to watch for anyone who casts a line in the Westcountry.
Posted by Dominic at 13:10 1 comment: 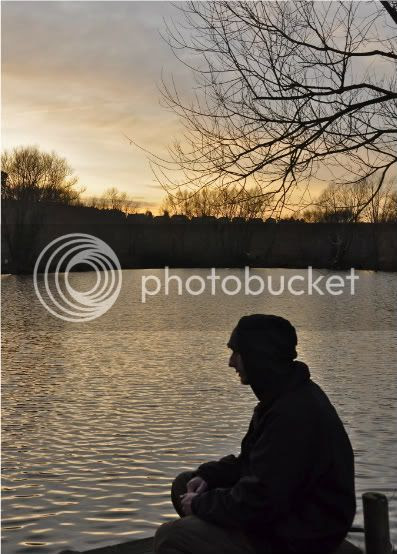 This week I feel the need to use that classic angler's excuse, dipping temperatures, for some fairly slim pickings. Then again, on some winter days any catch can feel like a bonus. That's fishing- and perhaps also the difference between a blog and a magazine feature, where the bones are removed and many hours toil are all too often boiled down to a grinning angler with a big fish. We all seek that holy grail of "consistent fishing" and yet it's the very opposite that makes the sport compelling. We have good days and indifferent days; days when we can do nothing wrong and days we can do nothing right. This is also why sitting it out on the same densely stocked water every weekend would leave me as cold as a well-digger's backside. Even the oft-derided commercial fisheries can be slower in winter though. At Viaduct I enjoyed a long overdue session in the company of fellow blogger and fishing nut Chris Lambert. With the going slow and fish baits off the menu, we put our faith in other offerings- including maggots, prawns and one of my favourite winter methods, chopped worm. We got the first part of the plan right, trickling in feed to get silver fish active. The odd better roach or skimmer showed up to entertain us, but where were the perch? 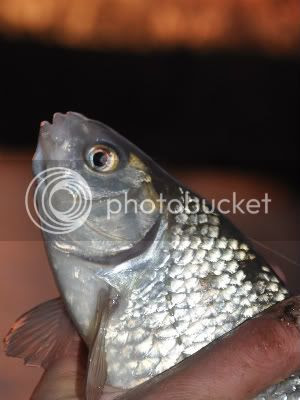 A stiff breeze didn't help- although some meatier bites finally arrived later and Chris successfully switched from his normal livebait tactics to grab a lovely perch of a pound on double red maggot. "Beau-ooo-tiful"-as Lambert himself rated it. No bigger ones showed, but what a heartwarming species perch are. 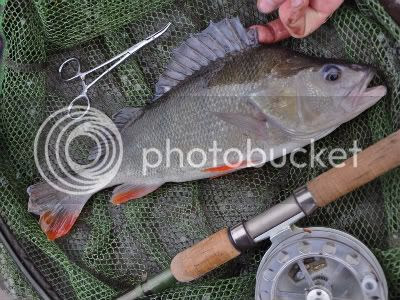 Regular followers will know my love for tying flies for all kinds of fish out of just about anything I can get my hands on. A current recurring theme is streamers. It's always fun using "accidental" materials. I am like a human magpie basically, and the latest in a long line of bizarre finds was a stash of rather fetching cocktail umbrellas: 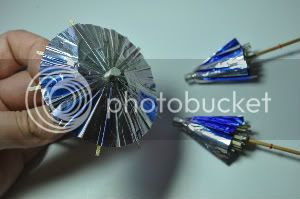 A lure hook, some marabou, a dash of tinsel and a dab of epoxy and hey presto- a chunky little Epoxy Minnow pattern. I thought the blue and silver looked fishy anyway: 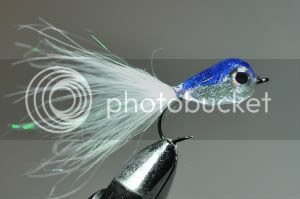 Here's another late creation, a minnow streamer intended for chub: 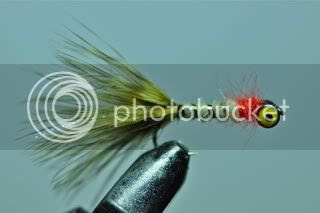 Talking of chub, my Sunday trip was in search of these very big mouths. The conditions rather killed it sadly- a combination of bitter cold temperatures and surprisingly muddy water on the Tone defeated our attempts. A shame because such flies take chub well on their day. 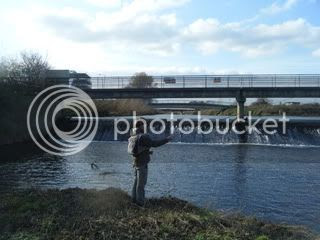 Even so we still had some fair sport by hopping onto the canal for a final couple of hours of lighthearted fun. Again, this is the joy of fishing- there's usually a plan B and when you're scratching even a handful of little jack pike are a pleasant surprise. Here's a cold but beautiful shot of the Bridgwater to Taunton Canal (just out of shot: a random bloke rather alarmingly armed with a gun, shortly followed by an irate cyclist arguing with a dog walker): 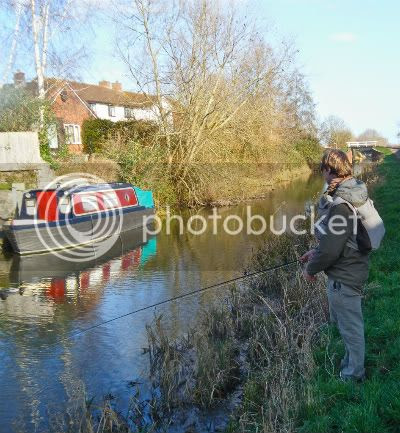 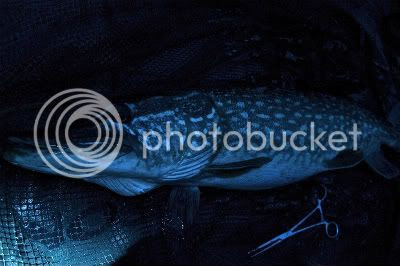 I always enjoy experimenting when I'm fishing. Without wanting to get pedantic, or overly scientific about it, I just find it interesting to make a few notes and try some fresh ideas. I blame my family partly, and their fixation with natural sciences. The sort of people who ruin a perfectly good science fiction movie with comments like "that's not actually possible".
On the subject of science, I've been having some interesting chats with my brother about global warming, along objective lines of inquiry like "what the bloody hell is going on with the weather this winter?" Totally unpredictable, fluctuating temperatures and water levels do little to reassure even confirmed Daily Mail readers that our climate hasn't become skewed. It says it all that many of the "Global Warming is a Myth" type studies have been run along similar lines to Manchester City- i.e. with oil company funding. 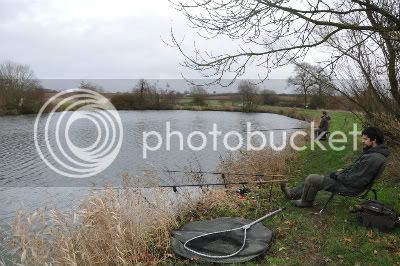 But I digress. Back to pike fishing and I've been thinking about what the numbers mean. It's a little geeky, but comparing trends on different waters can be revealing. To take a classic question: how long should I leave my bait in the water before moving on? If you look at the average time it takes to get a run, the results vary massively between waters. The optimum on small canals and drains, for example, is often around the 15-30 minute mark. On waters that are bigger, deeper or heavily coloured though (e.g. reservoirs, ship canals) looking at previous diaries it's surprising just how many runs occur well after the hour mark- or even the 2-3 hour mark. Makes you wonder- and whereas I once used to jump spots at least every hour, I'm growing more inclined to sit it out for longer these days.


Another notable recent trend has been the sheer number of runs occurring just before or just after dark lately. Is this the result of fishing pressure, natural feeding spells- or a bit of both? Geek theories aside, I just love that eerie feeling of a decent fish thumping away in the blackness! This nice net-filler came half an hour into darkness: 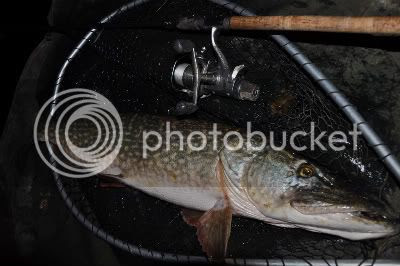 I've also been reaping the benefit of some local knowledge from fellow pike fishing reprobate Ian Nadin. He's had a cracking season so far, due largely to his intimate knowledge of the GW Canal. I thought we'd picked a duff evening for a fish yesterday. The water resembled chocolate, to the extent I thought we had more chance of snaring an Umpa Lumpa than a pike. Unless I'm on a nice river slack, coloured water often batters my confidence. Nevertheless, the power of large sea baits with a proper hum to them accounted for a couple of pike: 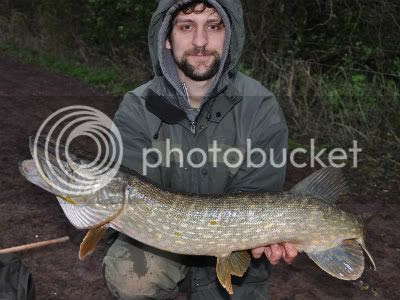 The really notable feature of the catch was that all the runs came on one rod, out of four shared between us. The difference? That one was the only set up using a swim feeder packed with bloody, fishmeal based ground bait. Definitely the way to go when visibility is poor- and it seems that feeder rigs are rapidly becoming the norm now in predator fishing. 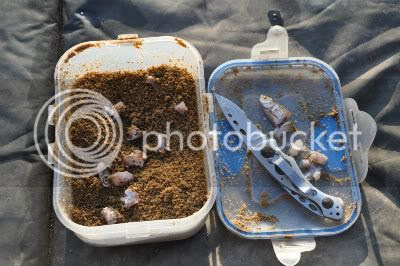 One final reminder for all Westcountry anglers is to put a couple of dates in the diary for Jan/Feb. The Pike Anglers' Club is delighted to announce a joint talk on Tues 24th January, downstairs at The Mill on Exe, 7pm start. We have a cracking double bill of Worcester predator specialist Dilip Sarkar, along with brilliant piscatorial artist Karen Sarkar, who will bring a selection of her best loved works. See my links section at www.dgfishing.co.uk for further details on the Devon PAC Blog and Karen's site. We are also excited to be lining up the Devon Baits Pike Match in February- with free bait for every competitor! Watch this space for more info...
Posted by Dominic at 02:38 No comments: