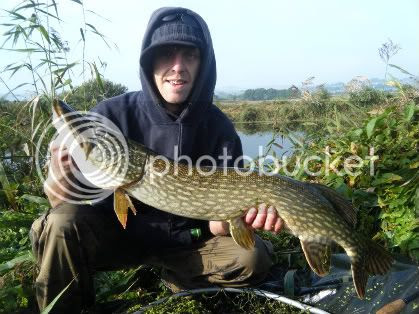 What a gloriously mild September it has been. Can still be a good time to fish too, with a bit of effort and the use of shanks pony. Today was an early start on Exeter Canal near Turf locks for pike- for the sake of avoiding human traffic as well as for fishing reasons. I opted to fly fish and wobble, whilst fellow Sunday escapees Rob and Neil went on lures. Bites were not exactly numerous, but well worth the wait. A six pounder was first up, going ballistic after snaffling a fly intended for perch sheltering under boats: 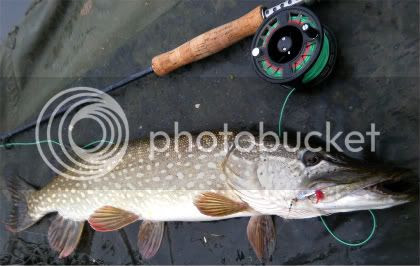 Catch of the day was definitely Rob's 13 pounder though (pictured at the top), the reward for getting stuck into some seriously overgrown swims. Well worth soggy trousers and nettle stings I'd say! The fish gave a spirited fight after grabbing a rubber shad. The bank was so overgrown that I literally (blush) had to get Neil to hold my ankles to reach down to the water and release the fish properly- oh well, a decent fish deserves respect, even if my dignity takes a dent.
The other highlight was Neil's discovery of a scrawled list of random mania clearly written by the sort of goggle eyed lunatic you might try to avoid at a bus stop. A little case uncovered a hotch potch of pub adresses, bizarre observations and remarks about spotting people "dogging at Lime Kilns". Nice. 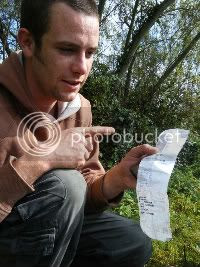 Other than these pikey goings on, Dawlish also provided some fantastic kicks for fly rod bass. On the small side generally, but over a dozen schoolies to home tied sand eel patterns can't be too bad- rod jarring takes and scrappy as heck on a trout rod: 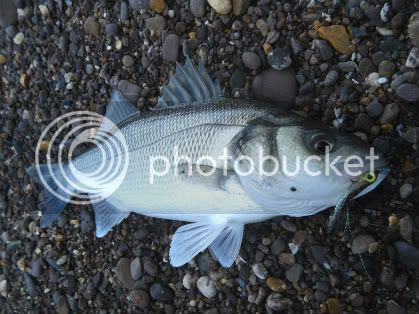 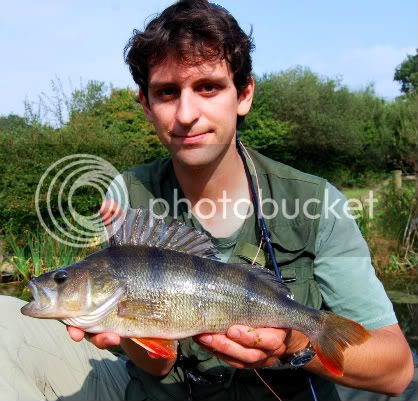 I'm quickly coming to the conclusion that the fly is a seriously underrated method for perch. The Grand Western Canal was tricky this morning, but I found a small group of good perch and was eager to see how my new patterns would fare. These stripey ones proved as cagey as any trout I've stalked too- keen to have a look, but getting a solid take is another matter. It's thrilling sight fishing- casting into the path of a fish and employing a busy but slowish retrieve. Eventually I managed to pick off a really decent sample that could have comfortably eaten the previous catch! 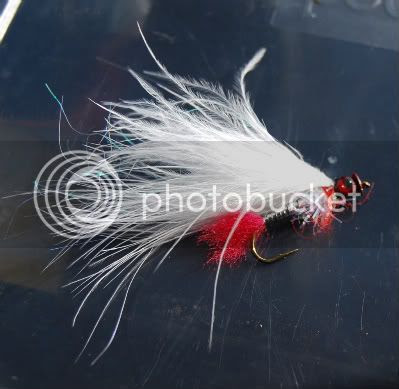 The fly was my own prototype, making the capture doubly satisfying. The "perch special" is bigger than a trout fly but not as huge as a pike pattern- a little fritz, white marabou mixed with Orvis Angel Hair, and a nod to tradition in the form of a juicy red wool tag. I'll probably now have that smug git look for the rest of the weekend!
Posted by Dominic at 08:43 No comments:

Any fish, any fly

It really is possible to catch just about any species on a fly with the right approach, and aside from the slog of carp angling, it has been a case of short but enjoyable sessions on canal and river this last week. You can travel so light that even a couple of hours after work can prove worthwhile.
Today was the Exe after pike. I must admit, my catch was a fish previously spotted by Rob Darby that was following but refusing to take his plugs. A slower moving pike fly did the trick perfectly- the harder part was getting this fit river fish into the net. I never like to play them too long and after a short but robust tussle we had her on the mat. Thirteen pounds and beautifully proportioned- not a bad start to the pike season?!! 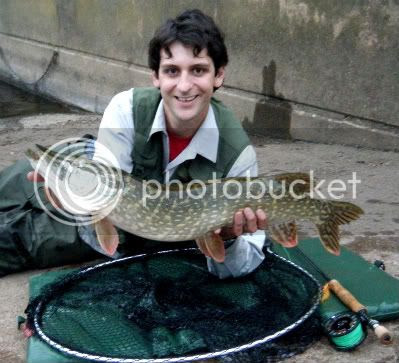 Otherwise Exeter Canal has been a fun adventure with flies- despite funny looks and daft questions ("are you fly fishing?"). Perch are proving fun on little streamers and lures, whilst the roach and rudd are taking little buzzers and hares ears- something with a bit of red seems especially useful. It is all essentially sight fishing, with a four weight rod. If you think trout are quick on the take, these rudd are lightning fast! I have a feeling the odd bigger fish are deeper, but plenty of pretty samples are delightful sport on a brook rod, a tiny hares ear as effective as anything on a warm afternoon. 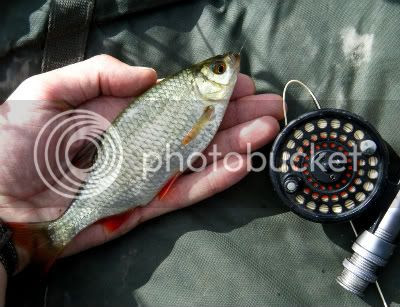 Things that go thump in the night...

Finally, the blanks are giving way to runs on the carp front, albeit on an easier water I hasten to add. After another gruelling night on the cut it was time to try Darts Farm ponds- smallish, but attractive lakes and at least the chance of a fish or two.
Goodness me the carp fisheries around Exeter are getting busy! I was surprised to find Darts busy as hell even on a week night, the main lake lined with pods and bivvies. In situations like this I opt for the weediest, least popular corner going, in this case the far end of the smaller pool where I hoped the pressure would be less ridiculous. A wise move for a change. 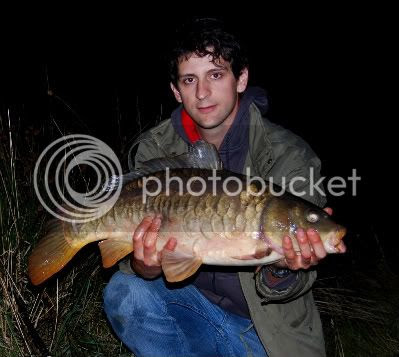 Two fish came during the night, both to homemade boilies created with a dose of potent liquidised peeler crab. Bingo! At 1am I had a dogged fish on that refused to be bullied- a 16lb mirror. Sadly the fish had some tail damage. The pristine fish came later at the silly time of 4am, a really powerful common that took me all over the lake on a light set up. This is why we wait- for that manic few minutes of action and the glorious feeling of a decent fish sailing away in the darkness. For all the carp fishing hype and busy waters, a solid common is still one of the most beautiful fish there is. I left the fishery tired but satisfied- the main lake had been deathly quiet. 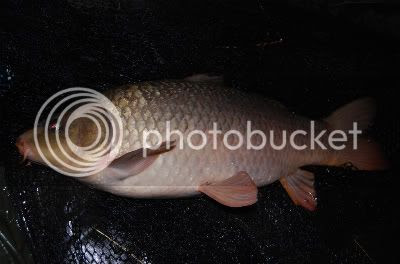 Small Dreams of a Millstream

With the continued absence of a canal carp (5 nights, no runs!) what better way to relieve the doldrums than a stroll on the mill stream at Countess Wear? Having had almost no sleep and a thick cold, followed by a tough few hours at work, it was high time to have a little relaxing fun. 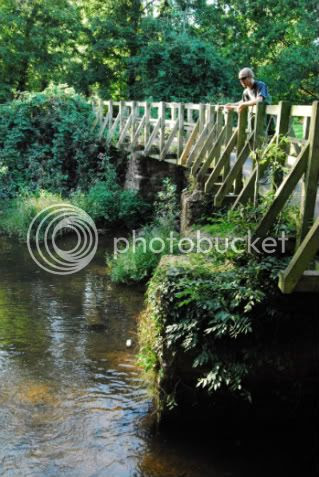 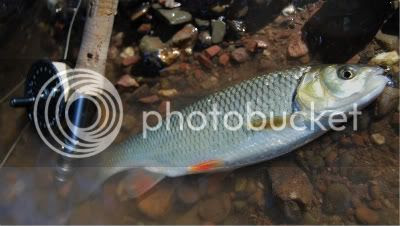 The stream itself is lovely here- lots of shallow runs and little pools. There are no big fish, but what a terrific range of species. I took a light fly rod, Rob Darby used a light spinning set up and we enjoyed catching chub, perch, roach, dace and even what looked like a salmon parr. Such simple but gratifying fishing here too- I took most fish on either a tiny hare's ear or a black woolly bugger for the perch. Rob had fewer species but the chunkiest fish of the day- a perch of, ooh, all of half a pound. 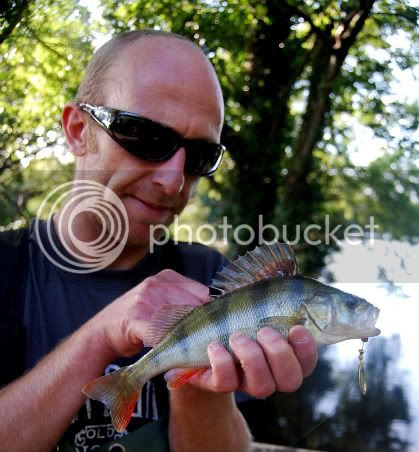 The visual nature of the fishing is the real draw here- just about every take was witnessed first hand and you never quite know which fish will arrive next. A couple of hours here is delightful on a sunny afternoon, even with a bad head.
As for those carp, their pursuit remains a kind of torture. Sinuses are still blocked as I type- although a double whammy of a hot sauna and a vindaloo curry did have some effect yesterday evening.
Posted by Dominic at 01:42 No comments:

Another tough night proved fruitless for the carp of Exeter Canal- soggy kit and soggy hopes this morning, although it hasn't been all downhill. A session on the Exe produced no carp either, but a beautifully solid bream of 7 1/2 Pounds. 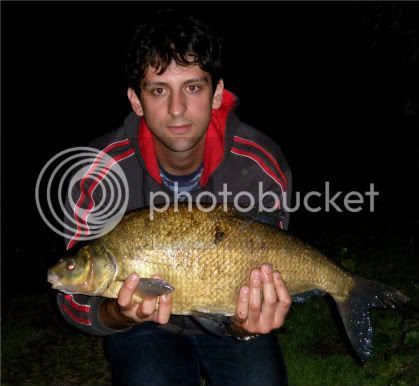 The tough feat of catching a big canal carp remains an elusive dream. For all the small steps forward in presentation and fish location the one quality required seems to be simple bloody minded persistence, even if that means soggy nights and bleary eyed mornings at work.
Better luck was had with the bass however. We had one each around the pound mark at Dawlish and I had the thrill of taking mine on a fly rod. A shimmering sandeel pattern really does look the part when the estuary is clear here, and I had other nips and a fish chase the fly right to my position. Excellent fun! Rob took his on a small artificial eal on spinning tackle: 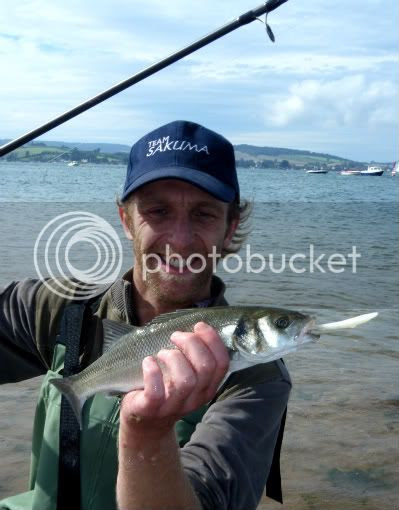