Ah, spring. Don't you just love it? The sun has been up. The fish are rising and you can venture out with only a t-shirt on your back and possibly a fly rod. Not that spring fly fishing is always easy. I've had mixed fortunes, but some encouraging results for both coarse species and trout this week. 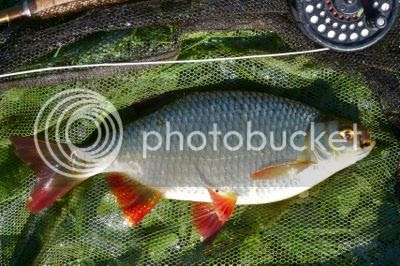 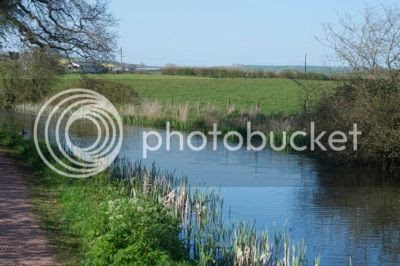 Aiming wet flies at rudd and roach was today's treat. My usual little spiders and "rudd bugs" came to the fore on the Grand Western Canal, but it was a case of walking and looking hard for the better shoals of fish. Only the really tiny ones seemed willing to touch flies on the surface, but by presenting slow sinking wets I had two net sized rudd in quick succession and even the smaller ones that followed were beautiful. The roach wanted a fly presented rather deeper, and with the wind sometimes blowing smaller flies off course I opted for slightly heavier patterns to try and get amongst them. A size 16 Tan Shrimp or Roach Grub worked well for these, although the takes were sometimes really cute. The job was made much easier in the sunshine, as I could sight fish. I even had a crack at a surprise tench that wandered through the swim, but failed to get the grub fly directly into its path. Never mind, here's one of several roach that intercepted a falling nymph: 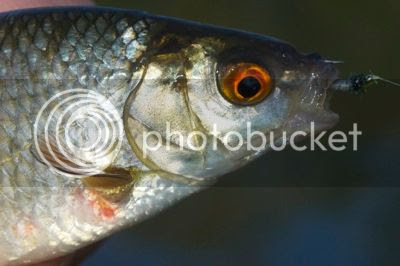 It hasn't been all plain sailing however. A trip to a different canal was more testing, with coloured water and debris making it tough to spot fish and cast to them unimpeded. What should the angler do if they can't easily spot the fly? An small indicator was the answer, to suspend small flies in the top two feet (and I prefer the foam, stick on kind, which you can even snip in half for a really cute little indicator). With fish hard to spot it was usually a case of scanning the water for rise forms and moving fish. They weren't big, but I had three species in order: rudd, roach and bleak.

The trout fishing has also steadily been improving on my travels too, and I had the great pleasure of a day on the River Rea with my publisher, Merlin Unwin. A pretty stream this one, lost somewhere in the Shropshire countryside and full of twists and turns. I was a bit muddy on our arrival and little was rising, so we went for nymphs. 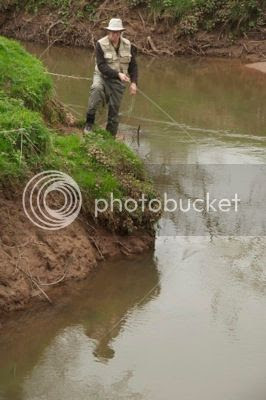 A handful of pretty browns were hard won on the day, but I loved exploring this new river. There were lambs everywhere in the fields. We found otter tracks and there are even the ghostly remains of an old railway platform out here. 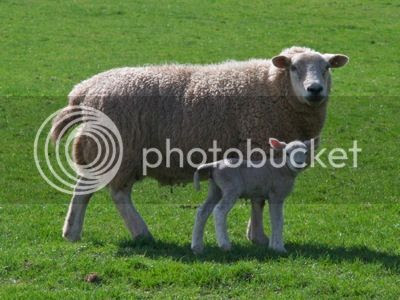 And it was great to hear some of Merlin's stories: of fishing with the Mr Crabtree author Bernard Venables, or the summer that Ludlow was flooded with mayflies. And we also celebrated the coming of my new book with a beer. Stocks of "Canal Fishing: A Complete Guide" will be in very soon.

Wild rivers are one thing, but the fish have been bigger in semi-urban locations recently. Not that the water quality is in any way lacking in many of our towns. Is there anything nicer than a shallow, stony river where you can sight fish for wild trout? We have free fishing in several Devon locations- (Theo Pike's book "Trout in Dirty Places" is a great resource).

A quick wander with a four weight was great fun. No dry fly takes on this occasion, and the trick was to get a nymph down to the fish. A hare's ear worked in the slightly deeper bits, or a PTN in some lovely shallow runs where trout were sitting in just a foot or so of water. This was the best of them, at 13" or so but very lean. 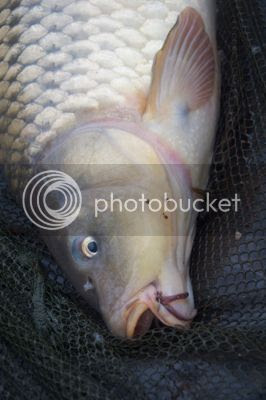 The beauty of being an angler of varied tastes is that there is always something to go for. I must be honest- my first choice on a spring day might have been very different to legering for carp. But take a really grotty day and persistent rain, and you have a much better recipe for action on a carp lake than on a trout stream, for example, that has been transformed from pure gold to pure filth.

Creedy Lakes are a place I hop across to once or twice every season. I also like to experiment with baits, largely because the place sees so many boilies I always suspect the carp are sick of getting caught on them. Bread and maggots both feature high on my list, but I really fancied giving worms a try and spent the best part of an hour gathering several hundred from the compost heap. Hard on the back, but completely free bait. They can be a pain to feed at distance, so I went for a spomb to put plenty of chopped feed at around thirty yards out.

As for presentation, I went with one running rig, and one semi fixed. With plenty of clay-like, sticky mud with the bait I even tried a rather gruesome method set up. No additives or gimmicks whatsoever here- just plenty of natural bait and very dirty hands. But was it to work? 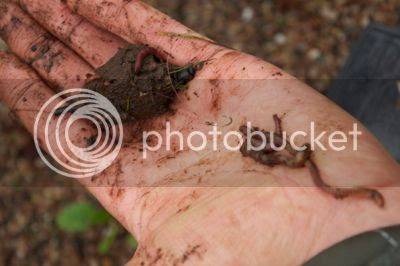 It didn't take too long before the running rig was getting twitchy, and then a full blooded run and a fish of ten to twelve pounds. I then added a smaller one and an eel into the bargain, before things went quiet and I added more feed. And the day tended to follow a similar pattern- the fish would come on, then only return after re-feeding with quite generous amounts of worm. The next one fought really hard on my standard Creedy tackle (1.5 TC rod, 10lb line) and was absolutely solid around the middle at 16.08lbs: 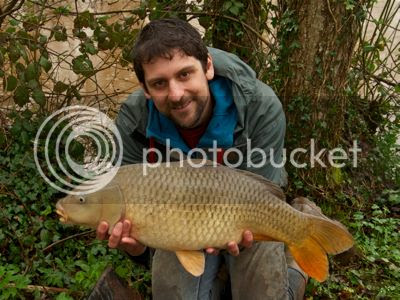 Two tench added further variety, before I eventually got fed up with the rain and went back for a hot bath. Mission accomplished I guess, and a decent return for a really crappy day of weather. It literally didn't stop raining for a second until about four in the afternoon and perhaps not surprisingly Creedy was less busy than usual. Not that I was grumbling- and I enjoyed the company of this little chap for most of the day, and he even got a few free worms into the deal: 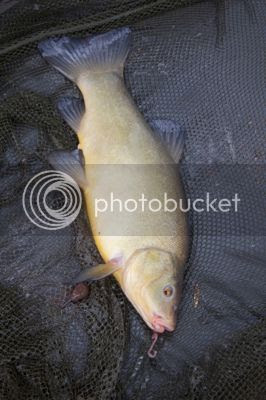 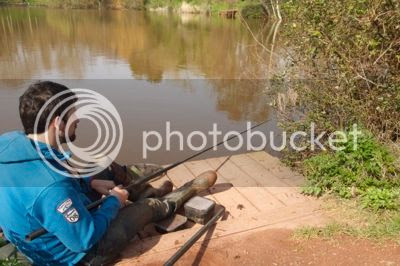 To some extent fishing has become like so much of modern life, tailored to human convenience. Call me old fashioned, but I sometimes think this is a shame. There is a time for everything each year, and both anglers and fish need seasonal changes. They give us welcome variety, while our quarry gets a rest.
Perch fishing, to take just one example, is generally something I do in the winter and then cease as spring proper kicks in. I've really not tried hard enough for perch this winter past, so it was a case of one last crack to try and get one or two more good ones before they think about spawning and I think about something else.
Shillingford used to be a cracking perch venue, but I've found the big ones get rather trickier the last two seasons. No surprise, because angling pressure can have this effect- and it's also true that predators are shorter lived than other fish, hence the fishing can be cyclical and you can find a dip as well as a rise in form each year. I persevered with prawns on a day ticket session, but struggled initially on the middle lake which I once found so easy. Well, I say struggled, but the carp were there in spades. They are a nuisance on perch tackle- one took me the best part of ten minutes to get in.
A switch to a neighbouring pond was just the job though. All the ingredients looked wrong: bright sun, middle of the day, not many bites. Suddenly though, after returning a half pounder, I hooked a much better one on the very next cast. A really plump fish this, and a nice finish at a little over the two pound mark: 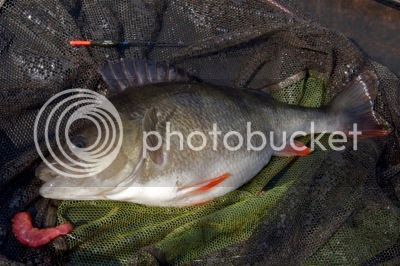 I then also spent a casual hour or so casting flies at the carp. In several places there were fish basking under trees, so I tried a black hopper gently landed in their sight. On four separate occasions I watched a fish mouth the fly, before it was either blown out or I struck too early! I left mildly cursing my lack of composure- but there'll be plenty of chances ahead this summer, and it does go to show that carp will inspect natural flies as well as the usual bait imitations. 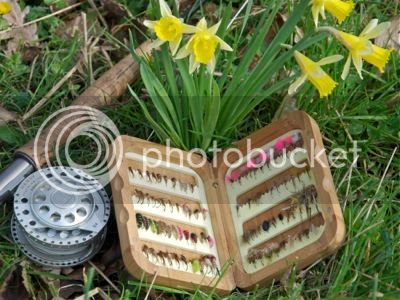 My next short trip was also with a fly rod, but this time in search of trout on a mild spring day. I'd been itching to have a go with a selection of flies I'd been tying over the winter. With rain fed, slightly murkier than expected water however, it looked like slightly larger and brighter flies would be the best solution.
I'm certainly a fan of semi-urban locations (and for anyone keen to sample free fly fishing I'd highly recommend Theo Pike's book "Trout in Dirty Places"). It was great fun to try a little suburban stream with Scott Cooper on this occasion- a keen all round angler I'd met before at Anglers Paradise. We fished some open parkland, but also some real poacher's spots, complete with brambles and less than simple access. Great fun nonetheless: 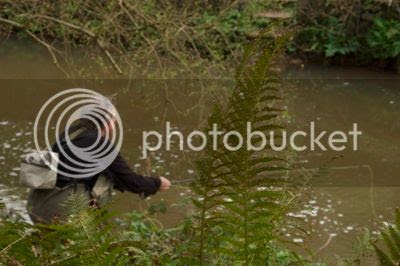 In the end it was the nymphs that won out- fairly large, bright coloured flies in particular. Some of the deeper pools looked delicious, but I got the feeling there was just too much colour in the water. Whenever I fish on rivers that are a little murky with the fly, I always believe your best chance is to find shallower runs, where the trout can at least see your offering. And so it proved. I took three lovely wild browns on a size 14 gold bead caddis nymph, and even added a fourth on dry fly- my first off the surface this season! Great sport considering the conditions. They went well too, these fish, no doubt eager to feed after a grim, flooded winter.