Flies in the Thaw 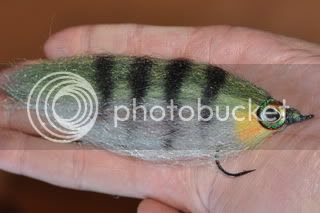 Water levels and temperatures continue to yo-yo, but does the fishing ever get totally desperate? There's usually something to try for, even if it's just to kill an afternoon. I was glad that Norbert Darby dragged me out for a Sunday trip. Signs were mixed. Warming temperatures, but also loads of pike anglers out on the canal, none reporting anything very dramatic.
The water had cleared slightly, but still didn't look that inviting, so I opted for a big perch coloured fly (above), with plenty of presence. To be quite honest, it was nice just to stretch the legs and make a few casts. About half an hour later, as I was sneaking the thing in slow and deep, there was a lovely tap-tap-THUMP! on the end of the line. If there's one thing I love about fly fishing, it's that moment of connection transmitted right through the fingers. 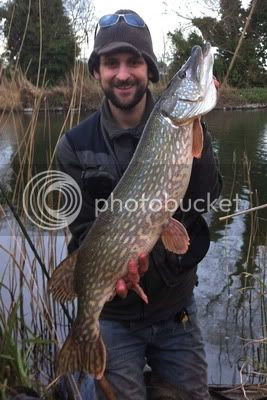 After a minute or so playing tug of war on my eight weight, this was either a very spirited jack, or something hefty. The fish that rolled was thick round the middle, and suddenly things felt more urgent. Norbert took some snaps while every dog walker and their beast in the vicinity decided to come an have an ogle- an added presence I rarely enjoy with a lively fish on the unhooking mat! This one went 15lb 4oz, really chunky and beautifully marked too.
Having being trounced by Norbert on our two previous trips, this was also a welcome comeback. "You won't catch anything on the fly" was his earlier piece of gamesmanship. Not that either of us gets pointlessly competitive or anything. It was also reward for recent homework at the vise. Having never know a season quite like it for floods and crappy conditions, my recent flies have been much bigger and bolder than the usual fare. Thank goodness for pike though. Without them, there would be quite a big gap in the fly fishing year. 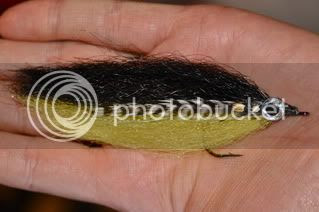 It won't be too long, of course, before other species start to feature with the fly tackle. Clearer rivers would be a start- but judging by the massive growing interest in flyfishing for coarse fish, it could be quite a year. Along with new partner in crime Charlie Hancock, we've launched both a Facebook Group ("Flyfishing for Coarse Fish") and also a Twitter account (@FlyForCoarse). So far the interest has been amazing, with well over 200 followers and members onboard in just one week! There'll be a big competition on the way, and lots of fun stuff to get involved with- watch this space. Better start tying for the spring now! (These are some roach and rudd flies I'm just finishing for a group member): 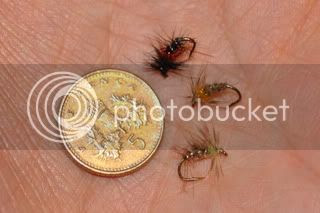 Otherwise, I've also enjoyed some more pole fishing. I hadn't been to Shillingford for ages, but this can be a banker water for cold weather. Provided, that is, you bin the text book swims. All those tempting looking features look great for perch- but when they have two feet of icy water around them, these bits can be pretty dead. The pole lets you test the depth with total accuracy however. Find an area a little further out just a little deeper (sometimes only 2-3 inches more than the surrounding depths) and you're often in business. 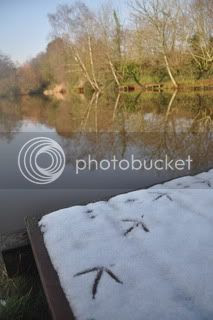 Despite the remnants of recent snow, a patient approach with regular helpings of caster and chopped worm did the business for a tidy net, with quality roach and several perch to just under two pounds. 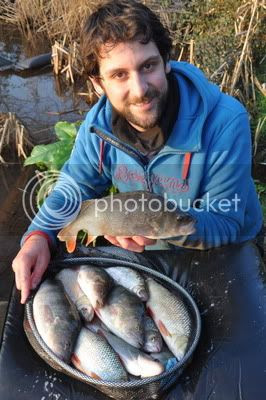 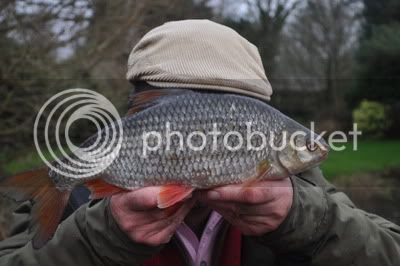 Winter has finally arrived with a flurry of snow. Great flakes of it are tumbling down, to the extent where (if you squint) Exeter might resemble part of Norway, only with crap architecture. It's probably just as well I've already got my recent fishing and writing done for now. The highlight has been catching up with the chap above.
Who is it, you're wondering? Somebody who is probably about ready to come out of hiding after a tough few months. Yes, Bob James. As unwise as he was to be caught fishing on June 14th, the backlash has been fairly ridiculous. This is an angling legend and a gentleman we're talking about, not Lance Armstrong. Nevertheless, the decent thing to do is to apologise, and I also got some candid comments from Bob, which you can find in this week's Angling Times. 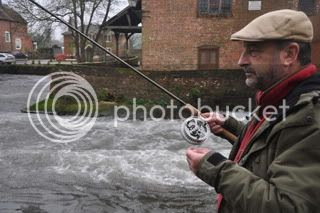 Is it worth bothering to fish in bitterly cold, snowy conditions? It's a fair question. Today I'm not so sure. Pike, chub or grayling are three just-about-possibles. Sometimes you have to literally trundle the bottom with a fly or bait, virtually dragging it into the mouths of fish. Here are some "keel nymphs" for just that job from my slot in this Month's Fly Fishing & Fly Tying magazine: 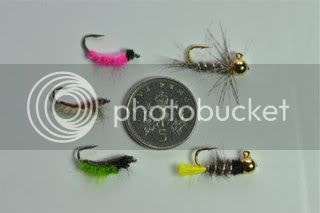 Failing the grayling on bugs, I think I'm happiest trotting if it's just some bites I want. Bread is perhaps king for this if the water is cold and clear. No liquidised stuff and tiny punches lately, but a more old fashioned pinch on a size 12 accounted for this nice roach: 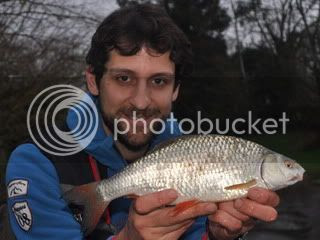 The only other note for Westcountry anglers is to put a couple of dates in the diary. We have Pete Gregory talking sharks (both salt and freshwater!) on the 29th at Mill on Exe (7:30 start). I'm also thrilled to say we'll have top eel man and colourful character Barry McConnell down for Feb 26th. The last I heard from him, he'd caught an eel in 100ft of water in freezing conditions. Now that's dedicated angling!
Posted by Dominic at 03:59 No comments: 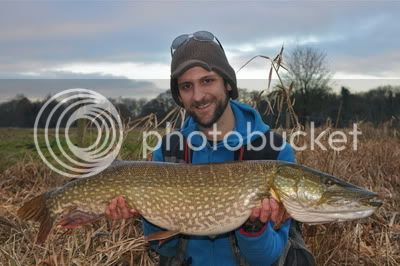 So many times in fishing, you wonder whether you're doing the right thing. Everything feels ok, but it just doesn't quite happen. Sometimes you change tactics. Other days you might even bugger off home. But when you've been granted a couple of days fishing a long way from home on a very beautiful bit of river, you just can't quit. The above pike definitely set off 2013 with a bang, but it could have been so different. I'd had no other action besides a 2lb jack all day. Too much extra pace, colour and depth for the fly to work, I felt. No interest whatsoever in sardines or smelt. And yet just one bite is enough to turn the whole day (and your stomach!) upside down. I hate putting weights on these beautiful creatures, suffice to say it was full bodied as well as in fine, fit condition. It took a 6" yellow and black Kopyto soft bait with the sort of heart attack lunge a pike angler dreams of. 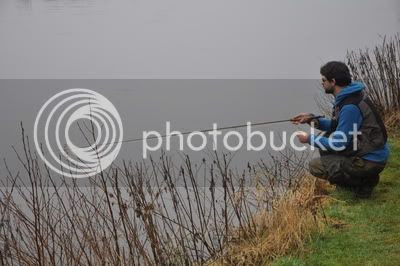 I haven't had the privilege of chalkstream fishing for a while now- but it was all part of tracking down a well known angler for a candid interview. But that's all I can reveal just now! Just being on a grand looking river is enough many days, big pike or blank. But in fact nothing could contrast further with my other dabblings early in the new year.
My last pike outing had been a battling affair on the Exeter Canal. Lots of Sunday anglers and hence lots of walking to start with- for not a lot of excitement. The canal looks unusually coloured too, even well after the flooding. I usually save the techy stuff for my articles, but if I've gleaned anything from the past couple of very wet seasons, it's the value in dyed offerings and groundbaiting, just to give pike every possible chance to find a bait in grubby looking water. Hey presto! I had two typical canal pike in the 5-6lb bracket to provide some very welcome excitement. 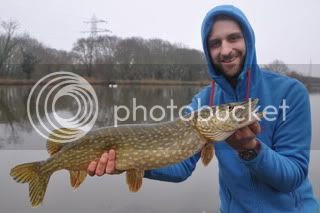 In spite of my adventurous walk at first light, both fish came near the car park in the middle of the day, where I also enjoyed the company of Russ Hilton, who tried the quiver tip. I think the small army of cyclists racing past put him off employing his rather tasty new pole. Chance of a Tench in January you say? I won't steal his thunder in this case, but do grab a look at "Tales from the Towpath", which is always worth a read. 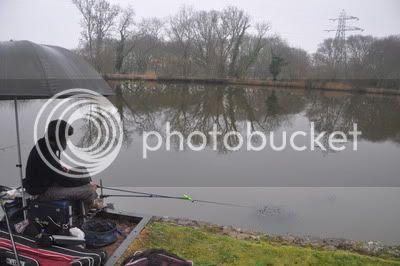 Otherwise, my fishing has reached even busier locations. The free fishing at Wellington town lakes will shortly be the subject of a little Angling Times feature. Not bad at all for bites from silver fish pretty much all day long on pole or waggler. Yes, the big fish are great, but there's also a lot to be said for simply fishing for bites and playing about with floats and feeding patterns. It's here that fishing fulfils that strange paradox of allowing you to be totally relaxed yet somehow happily tinkering away at the same time. Lots of fun. 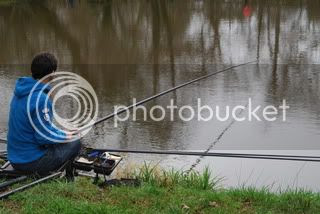 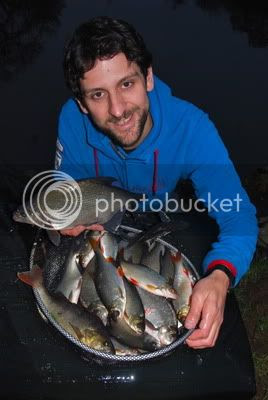 Oh- and as a final shout to those of you based in the SW who like predator fishing, we have a great meeting lined up for the Pike Anglers Club at Mill On Exe for Tues 29th Jan. Shark fishing will form an exciting topic alongside recent piking for guest speaker Pete Gregory. See the PAC Region 13 blog for more details (see "links" at www.dgfishing.co.uk).
Posted by Dominic at 11:36 1 comment: