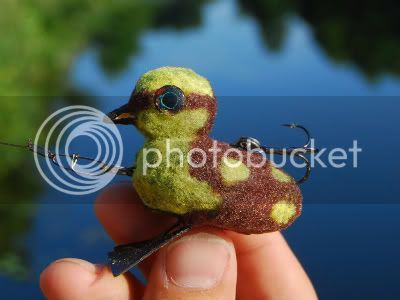 This week has seen the culmination of a covert, barking mad plan I've had for some time now. I've always enjoyed making my own lures and flies- ducklings have been a logical next step into further madness. But just like imitation frogs, mice and the like they work- and pretty well once the weed really kicks back in the spring. 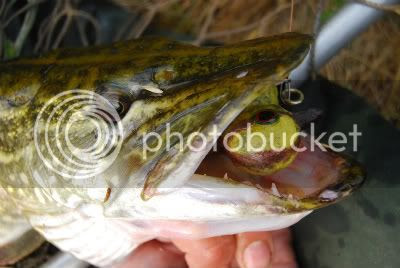 It's irresistably bloody good fun. Not ultra efficient, and you seem to miss takes just like with other surface lures- but when you do get a pike to batter your twitched creation it's always ludicrously exciting. Takes me back to summers past when I used to use home made mice to catch pike, complete with shoe laces for tails. I still have the picture of a mouse caught 17 pounder, although I look pretty indecent as I had to lose my trousers to get into the water and wrestle the thing into the net! The bigger fish tend to like lures that make a commotion- and I have to say I've had far more success on shaggier, messier creations than ultra realistics- which draws a parallell with fly tying. 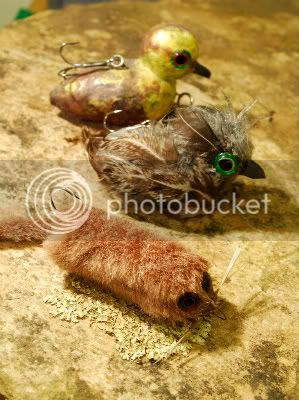 If you are going to do this weedy, manic style of fishing, strong tackle is a definite must therefore- and I would recommend waders or even swim shorts so as to remove the fish from the water for as little time as possible. As for the other grisly details of this barmy method, have a peek at the Angling Times this week- after keeping the lures and story strictly under wraps for some time, the whole gruesome tale of "The Ugly Duckling" can now be seen! 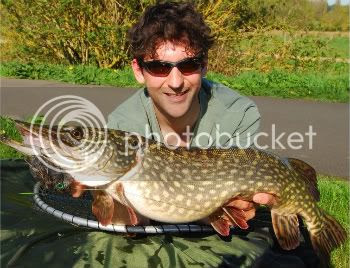 The madness hasn't been confined to fresh water fish either- or indeed just fish. Torquay is awash with weird visitors currently. No, not Northerners, squid. Catching these freaks makes fishing with a duckling seem like a regular day out frankly. These odd creatures are attracted close in at night by the lights of the harbour. Usual lures are useless however- and you need special luminous things. The sort of lures you probably look at in the tackle shop and announce "what in the Devil's name is that for?" 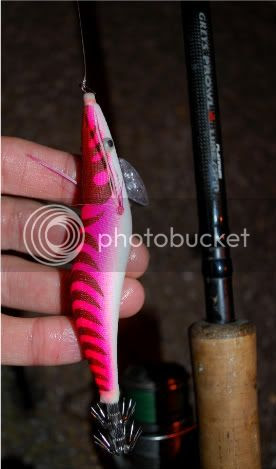 Now I have my answer. Fished under a float, or like a lure, these luminous jigs are grabbed by the squid, which you then have to haul steadily in. Not as straightforward as it sounds- and I lost two, firstly landing just a piece of torn off tentacle, before managing my first squid! Looks like the sort of creature you'd find attacking Captain Nemo's submarine, never mind buggering about on Torquay sea front!: 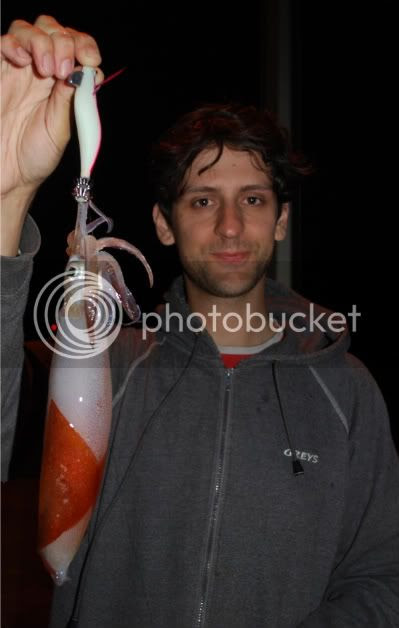 Bloody weird. Also quite tasty. A word of warning though- don't be in too much of a hurry to handle one straight away unless you like getting squirted with ink! All in all it was a fascinating evening- with a few bonus mackerel also thrown in. I'm also keen to try float fishing for squid. One of Greys battery powered "nite floats" would work brilliantly I'm sure, seeing as these b-movie style freaks are attracted by light? Next stop the lunatic asylum... 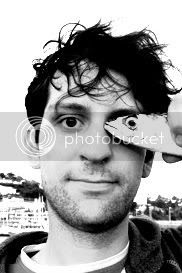 Tea on the Test 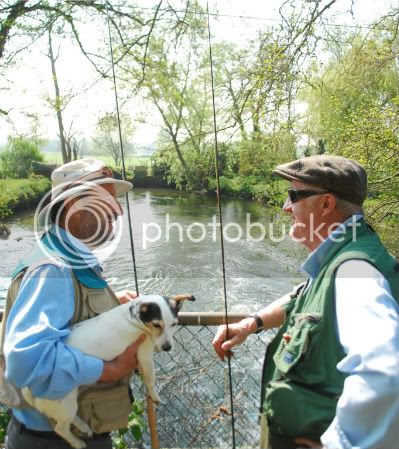 Having already seen the quality of winter coarse fishing on the Test, I was just as excited to make a return visit with Bob James and Chris Tarrant to see this famous river in all its spring glory. A little fishing hut beside one of the rivers many pools is a pleasure in itself. Exclusive or otherwise, water as tasty as this quickly turns grown men into excited kids- and you can be sure many of the best, worst and most optimistic plans are hatched over a brew in these surroundings. 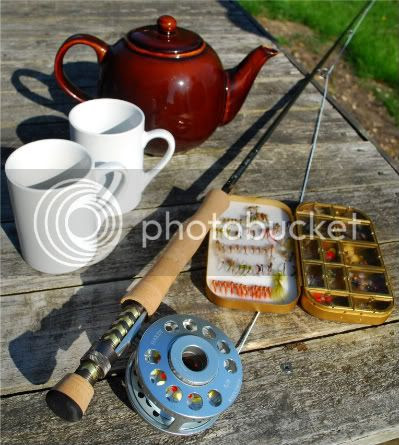 Fishing goes back to the 1300's on the estate where we visited, but the management and use of the water stretches back to the Romans- who can't have failed to make use of the ridiculously clean, rich water which was later also used to produce crisp new bank notes. And the salmon were once so plentiful that the gentry used them to build fences (ok, that last bit is bollocks): 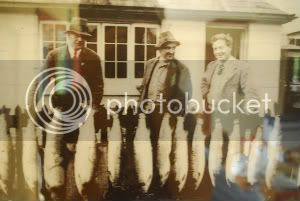 The Test also produces crisp, classic looking fish of course- and in these more enlightened times, coarse fish have been allowed to thrive besides the trout and salmon. Still, there's something quite amusing about watching anglers on the most hallowed trout stream in the world commenting "cor, that looks like a cracking place to trot for roach!" And why not? It all adds variety- not to mention some more affordable fishing later in the year. For the coming months however, it is the trout which provide the obsession. 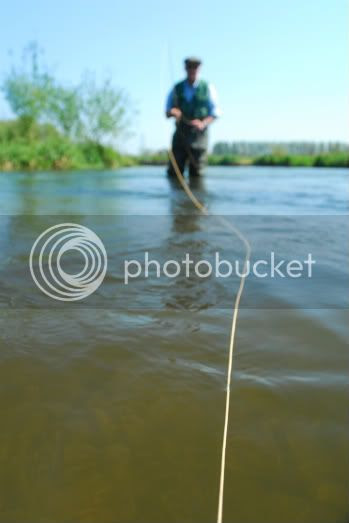 The day was so hot it was better for pictures than fishing however, although James and Tarrant had a few casts in the course of their recce. The air was thick with grannom sedge in places- almost so that the fish had too much choice! Still- the Test is one of those places which is so beautiful it would be difficult not to come away feeling the better for it.
Posted by Dominic at 00:21 No comments:

Big Perch on the Fly 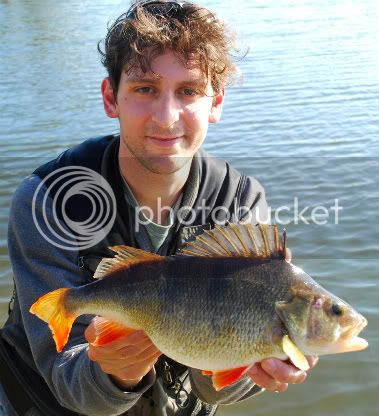 The same old cliches tend to persist about fly fishing-especially in unfamiliar territory such as a canal. "Elaborate", "fussy" and the classic "aren't you just making things more difficult for yourself?" Er, no. I love the elegance of the method, yes- but I'm no fan of rarified but useless methods. On its day, the fly is a match for any approach.
My latest session was a point in case- in total contrast to a recent joyless five hours using specimen tactics for perch, casting a fly feels quite liberating. You can tease a fly slower than any lure and it's great fun to feel every nip and pluck through your fingers. After an inevitable early pike, I thought I'd hooked another- before a slower, thumping fight said otherwise. I nearly had a heart attack as it neared the net- and then another when the scales showed 3lbs 2oz minus the net! I've been after a canal perch like this for a long time- the usual customer closer to three ounces. 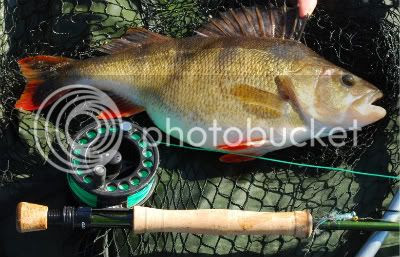 Perhaps the biggest obstacle to the perch fly fisher is the lack of flies or info. It's true, big perch fall to pike flies or trout lures sometimes- but the former tend to be too big, the latter rather small. I also like a well weighted pattern when the fish are holding deep, and for this reason I like a fly with dumbell eyes designed to stay deep and fish hook point up to avoid snagging, much like a jig or the classic Clouser Minnow. My versions are simple enough- a tail of EP fibres or arctic runner mixed with Krystal flash or similar, a body of fritz or sparkly dubbing, a grizzle hackled collar and a dumbell head to "flip" the fly over to fish point upwards. White and yellow are favourite colours: 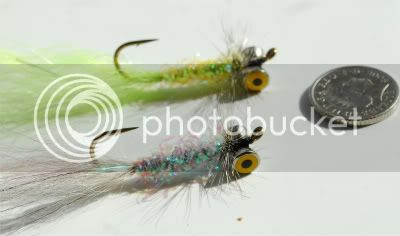 For more on the subject of catching perch on flies, a big recommendation would be my book "Flyfishing for Coarse Fish", which has patterns, tactics and lots more. Turrall also now produce special purpose made flies too, which you'll also find on my website here: DG FISHING I also offer South West anglers guided fishing for various coarse species on the fly, including perch.
Posted by Dominic at 03:02 1 comment:

Wild Tales at the Court of King Gregorek 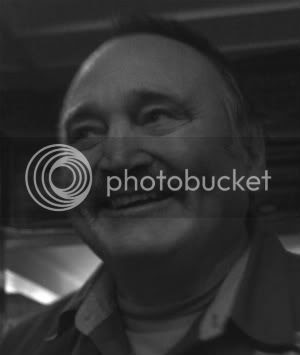 Some days a writer's lot is a joy, on others it is a test. Sometimes it is both. How, for example, do you sum up a character as vivid as Zyg Gregorek in the space of a short article? After a close shave in Karachi where he was within an hour or two of becoming a hostage, Angling Times were keen to get a sketch of this grand angling eccentric.
Far from being a freak event, Zyg's latest adventure seems hardly out of place in a lifetime of strange twists and colourful tangents. And yet there lies the paradox- an undeniably zany character and self-proclaimed hedonist, yet also a businessman with lazer sharp focus. One time refugee, adventure fishing nut, wine brewer, obsessive collector, fish breeder, thrill seeker.. the list goes on and little elaboration seems necessary in charting the life of the Angler's Paradise boss. It was an interview to raise more eyebrows than a streaker at the Conservative Party Conference... but for more you'll just have to get the Angling Times on Tuesday! 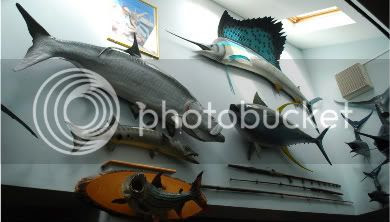 In my own madder moments when I imagine a future Britain as some kind of angling Utopia, I picture Zyg as its president. The economy would be based entirely on fishing tackle. The currency wouldn't be pounds or Euros but flies. Fishing would be free and participation compulsory. State meetings would be attended in waders. All roads would be replaced by canals. Because of a fish heavy diet we would all live to the age of 107 and be geniuses. Strange how a glass or two of Zyg's wine tends to give you ideas...
Talking of wine, the bar at Angler's Paradise itself is also well worth a visit for the sheer spectacle of the curiosities on display: where else can you see cased eels and golden rudd, fish on tables and posts, marlin and swordfish jutting from the walls? 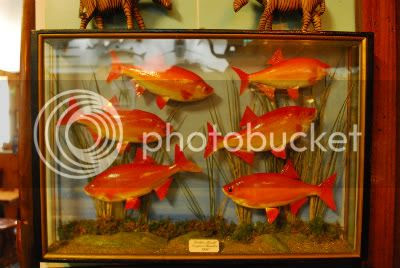 Back in the less colourful outside world my concern over hydropower continues. The scope for damage to rivers both in the Westcountry and nationwide is simply too glaring to ignore and so I was quick to agree when BBC Devon wanted an angling spokesman for a midweek programme. The archimedes screw we saw was perhaps the best of several less than ideal options for fish. Even so, there is no such thing as "free" energy- and our rivers could pay a high price should they be used as a simple commodity to generate power for the government and easy money for land owners. 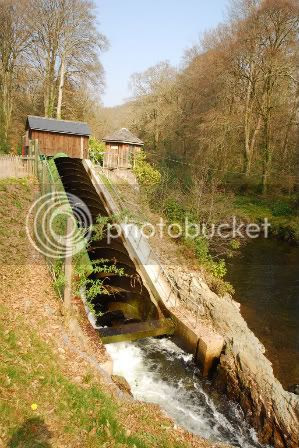