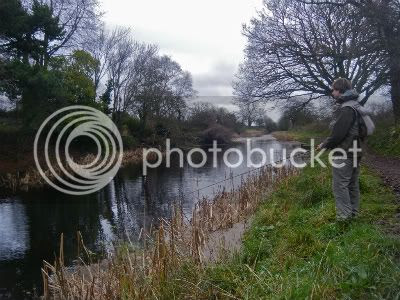 After my detour with some surprising "commercial" pike, I've returned to some more flippant, down to earth canal fishing. And very welcome, after some days of festive gut ache and several enquiries over the small water twenty in the past week, which I'm informed has already been recaptured within a matter of days! This is one of the thorny issues with piking in general- but especially where small waters are concerned. The fish don't have much space to hide and whilst you can't begrudge anglers wanting to catch fish, you do worry about the condition of specimens repeatedly targeted. Pike can't suddenly switch to vegetarianism, and I guess ultimately it depends on how careful each captor is.
Back to the fishing itself though, and Boxing Day was an absolute blast on Tiverton Canal. Accompanied by my brother, sibling rivalry soon kicked in. I made the usual mistake of lending him my pike fly box- and a yellow fly proved the real destroyer, standing out well in the water even where it was carrying some extra colour. Was I to be defeated using my own weapons? It didn't seem to matter a whole lot while takes with all the finesse of a car accident kept occurring. 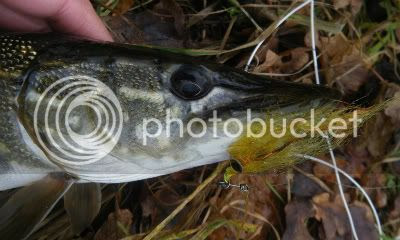 Had this fishing trip been a Boxing Day footy match it would have been one of those games that ends 4-4, with a penalty, three sendings off and a pitch invasion. Brilliant fun on light tackle, even if the pike were typical Tivvy specials, the biggest scarcely troubling the three pound mark. Ben ended up winning 10-9 in the catch stakes, although play was interrupted as a deer jumped into the canal! No joking, I'm not still sozzled from Christmas Day, someones dog spooked it and we watched the thing swim across and jump through the hedges to freedom. The other feature was swarms of Jackdaws- twenty strong mobs soaring over the trees.
It's great to see the canal so much healthier too, the rains having taken it from drought levels and back to health. Had there been a big freeze rather than rain, a fish kill could have occurred- and my fellow Pike Angler's Club RO Ian Nadin deserves credit this year for really sticking his neck out with the angling club and canal trust.

Aside from catching up on eating and sleeping, the Christmas break is also a good time to catch up on other fishing related homework- such as tying up a selection of flies for the new year. One current project is trying to use all sorts of household junk, odds and sods and flotsam to use for fly dressings. Christmas is great for this, as there's always lots of sparkly debris. Inspiration can come from anywhere though- most lately, the pet cat, Belle. She asks for it really, always jumping onto my lap whenever I'm busy at the vice. 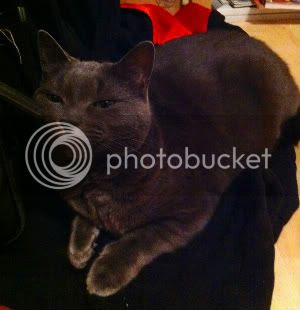 She certainly sheds plenty of hair- and it's not bad quality either: fine, good colour and easy to dub! A little goes a long way too, so no need to pull it all out just yet! This cat is so tolerant, you could probably saw one of her legs off and she'd carry on purring. Here's a "Belle" Nymph: 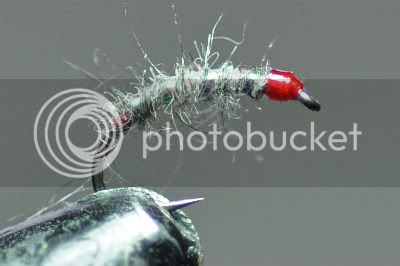 In other news, I also have a long awaited shipment from Finland. We may have missed the Christmas rush, but I am now fully stocked for 2012. These are the hand carved perch and pike key rings (www.dgfishing.co.uk): 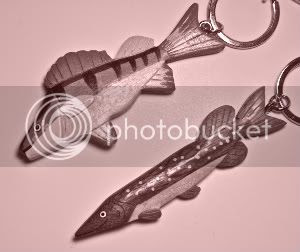 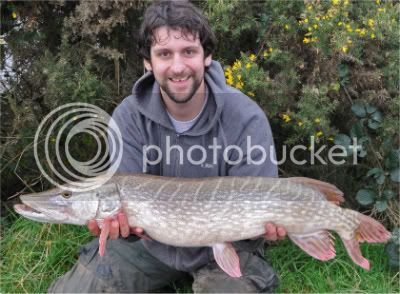 On a list entitled "likely places to catch a sodding big pike", you'd expect small, manmade lakes to be near the bottom. A shame, because the potential is there if you can only find the ones with pike. I've tried several club lakes and day ticket commercials over the past few seasons, with mixed results- but also the odd genuine surprise, like today!
It's true that their usual carp related muddiness does limit water clarity for fly or lure fishing, but there are other advantages. One of these is that rather than sitting there shivering, you can fish a float while waiting for that monster to bite on a second rod. Quite often I plonk a dead bait right alongside the line I'm feeding for smaller species- often enough, this activity will draw predators in. If not, then I can think of worse ways to spend a day than watching a float and picking off roach, skimmers and carp.

After several mediocre to downright poor sessions on the river and canal around Exeter, it was fun just to be getting bites again and spend an overdue day with my Dad- pike or no pike, we hadn't been fishing together in ages. The lake in question hasn't the biggest head of pike, but they're growing fast- strangely enough, the fishery boss also insisted "no publicity please" -a decision I fully understand, and in some ways refreshing in that it shows that the condition of the fish is the priority rather than just flogging tickets (and no, sorry folks, the lake isn't the pic above- just a nice wintery shot from Frazer McBain).

Anyhow, back to the fishing and the script was uncanny. Two hours in I exclaimed "funny, lots of silver fish, but where are the pike? Not a sniff so fa-" and before I could finish the sentence, the drop off signalled a take. The first pike went just under fifteen pounds, gratifying enough. I would have gone home happy enough, until the next run produced an even more solid presence, a gentle take followed by a bottom hugging fight. With the fish only lightly snared on barbless hooks, it was a case of bundle it into the net as fast as you dare. "Bloody hell" was my old man's verdict. The fish was an absolute barrel- incredibly well fed and thick round the middle. Once the scales were zeroed, she yanked the needle round to very healthy 20lbs 4oz. After several tough recent trips with most of the drama provided by gales and heavy rain, this was a very sweet catch. Thank you pike, and merry bloody Christmas to you all!
Posted by Dominic at 11:15 No comments: 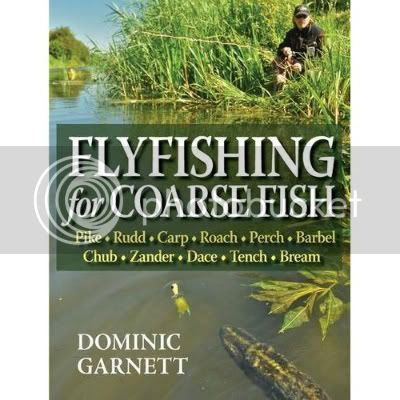 I am a total mash of different emotions at the moment. 2011 will have been perhaps the busiest year of my life, with two books now in their final proofs and design stages. There's still a while to wait for publication in each case, but it's exciting already just to see "Fly Fishing for Coarse Fish" now listed on Amazon to preorder! I am especially proud of the cover shot- one of the best of some 20 000 taken in the last twelve months. Behind one glossy book cover is a campaign of muddy, long haul trips and endless planning and writing- some disappointments but also some remarkable catches I hope.
The real thrill will perhaps be to contribute something of a permanent reference point in angling. Magazine features are great, but they're there and then they're gone. A hardback with over 200 pages of my best words and pictures is very different. On the home straight, my feelings are mixed to say the least- relief, trepidation, pride, a hint of exhaustion. If nothing else, I hope plenty of fellow anglers enjoy "Fly Fishing for Coarse Fish" and give something new a try. Some of the chapters took real determination (tench, zander), but other species are just so perfectly suited to fly fishing I can't quite fathom why we're not already flyfishing for chub, rudd, carp etc in our droves. 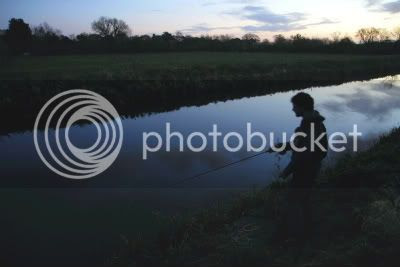 Text is one thing, but I also wanted to show the methods in practise with a DVD of the same title, which includes roach, rudd, carp and last of all pike, which I've just finished filming with Steve Lockett. Film work is a very different pressure- juggling different camera angles with a loose script and the need to catch in a limited time frame. A slow start on the Levels didn't help, with rains really stirring up my chosen drain. Having taken just one tiny pike, plan B was an afternoon on the Taunton to Bridgwater Canal. 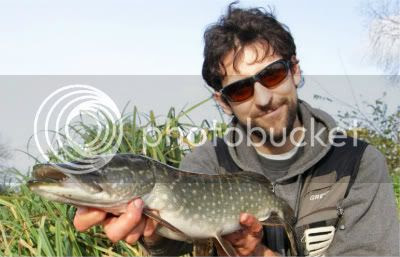 A smart move as it turned out, because the water was much clearer and although hardly on fire I managed a further five pike to around 5lbs. The best fly seemed to be a pink number, which really stood out and was also, interestingly, the only colour to get any response in coloured water early in the day. 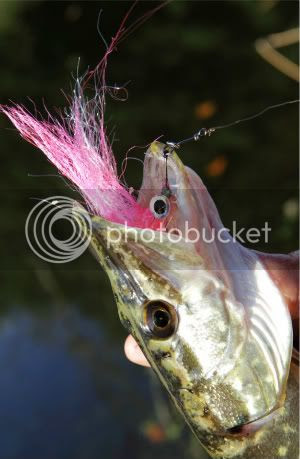 Credit is also due to film maker Steve Lockett, my partner in crime for the DVD. From the footage you might guess there were several cameras- when in truth it's just one intrepid camera man- scaling banks, dodging casts and getting up to the armpits in cold water. You'll have to watch this space for a trailer- but most of the project save some fly tying sequences is now finished. 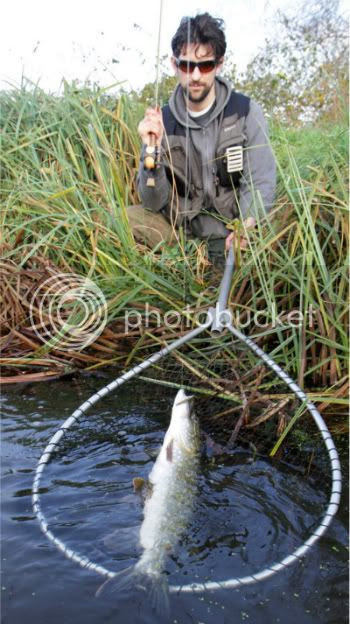