A cast on the far side 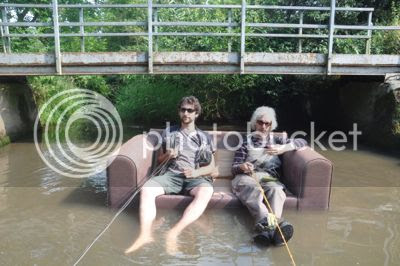 Of all the characters I've met in the angling world, it's perhaps the rebels and convention defiers I treasure the most. Such is Dee Egginton, better known as "Skateboard Dave". Here is a fly angler who hasn't so much ignored the textbook, but crossed out every line before setting it on fire and throwing it into the Mayor's back garden. Not surprisingly, he fly fishes for everything and some of his ideas and exploits are on a different planet. Kind of fitting really that we found the above sofa for one of the more bizarre photo opportunities I've ever come across. 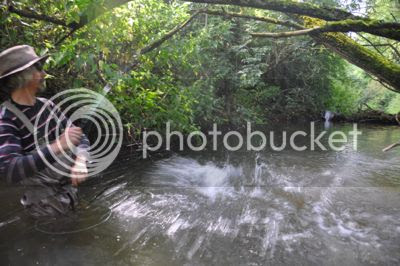 From the off, and a long walk, I knew the day was going to be an adventure as we made our way to a madly overgrown river. There was hardly room to cast, such were the tiny dimensions of a lost midlands stream, but that didn't stop us sneaking around and catapult casting our way to some devilishly exciting close-quarters fishing. It began with a bang, literally, as the first fish was a powerful trout which took a streamer within seconds. 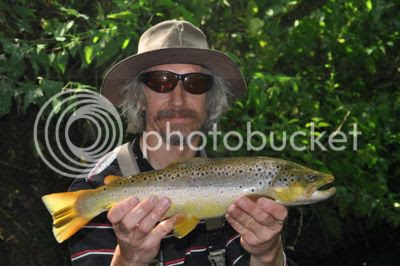 It was to be the first of a cracking brace- although we were actually after coarse fish primarily!

In the limited confines of such a water, long rods were the order of the day, with short casts and tactics not a million miles away from ultra light lure fishing. Perch were abundant too, also giving jig style Tadpole flies a good whack around any form of cover. 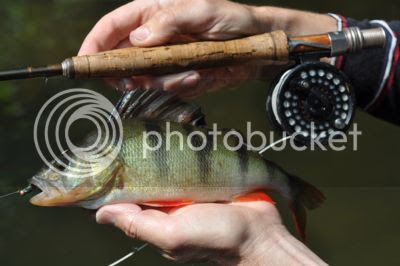 Sadly these buggers were common too: In fact, my pal and invasive species expert Theo Pike would have been proud of us as we dispatched several. I say "we", but I found them tricky- Dee showing me the best method of sneaking behind the buggers before applying the boot. Actually, quite a strangely satisfying thing to do.
Meanwhile though, in the fishing stakes I managed to miss a good early chance or two as fish hit my streamer. Luckily for me, I got my mistimed strikes out of the way early as I managed to react better to an even better hit a few yards further on. A real whack and a hair-raising fight could only mean one thing: trout! The biggest wild brown I've had in several years in fact: 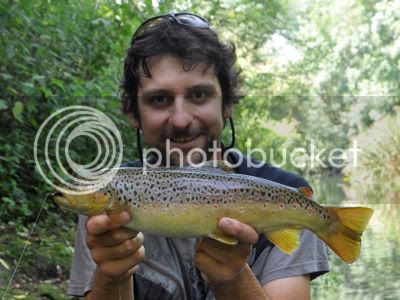 It was to be a fascinating, eye opening day in general, and although there is only limited space in the scribble that is my blog, the adventure continued as we added chub and dace before driving to Mallory Park to turn our attentions to further targets. Carp were first- and while the oft cited tool for landing these hard fighting fish is a stout seven or eight weight, Dee showed his typical disregard for convention by digging out a little three weight solid glass blank: 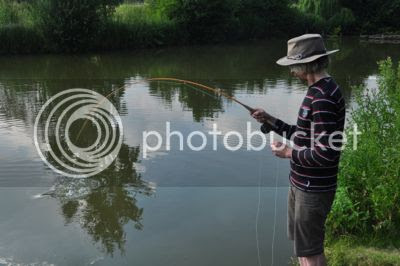 Basking fish were targeted by both of us without a dog biscuit in sight. I kicked off with dark spiders dressed on forged hooks, while he landed some crackers on tiny bloodworms: 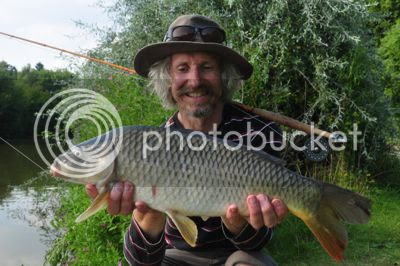 The most instant fishing was had by simply landing slow sinkers gently in front of basking fish. However, it got really interesting with a switch to "blind nymphing" with tiny flies such as bloodworms fished right under the rod tip. I'd never been very confident carp fishing in this fashion, but Dee's tactics were a revelation. The tiniest knocks were followed by surging hooked carp hooked fair and square in the lips, to the point where he was actually disappointed because he wanted to catch more roach and perch than these greedy things! 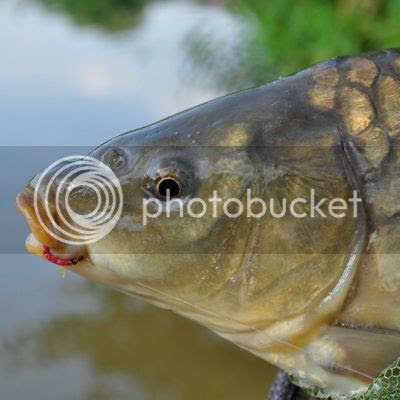 The odd silver fish did follow before we remembered that human beings need things like food and water. And while there is only limited space in my scribblings here, my mental notebook is still awash with thoughts and musings on the maverick that is Skateboard Dave. The fact that the guy is not a household name in angling, while sponsored planks trot out the same guff every season, is a damning inditement of the current angling scene I would say. But perhaps this is the difference between an angler who fishes to impress others, and someone like Dee who fishes not for endorsements or reputation, but to satisfy an insatiable inner curiosity that sees possibilities where others view only arbitrary boundaries.
The worrying thing for fly fishing in particular, is that the more it follows the familiar (and often expensive) course of tradition, the less it will appeal to the new breed of angler, and the young in particular. Which is why it was excellent to be part of the Fly Dressers Guild part of the CLA Game Fair with the Turrall team. A whole host of youngsters tied their first ever fly, which was excellent fun, while I was bowled over with the skill and enthusiasm of Ben Beckwith, who ties patterns that would be the envy of fly dressers several times his tender thirteen years of age. We did a little swap as he showed me a brilliant sedge pattern and I showed him how to tie a pike fly in return: 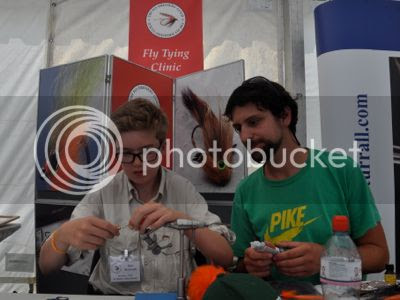 The show was a lot of fun as always, and I also had the honour of signing some of the new "Canal Fishing" book with the other authors on the Coch-y-Bonddu Books stand (pictured are Peter Hayes, Theo Pike and Malcolm Greenhalgh). 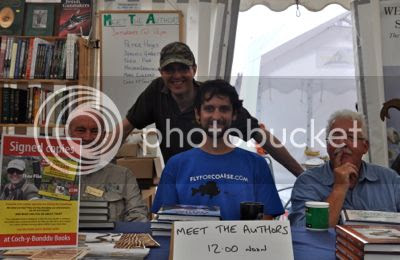 As per usual, this blog is lagging a little behind current goings on I'm afraid, as I literally dashed home from the Game Fair and headed straight over to Ireland for a crack at both trout and rudd. But I'm knackered and that's another story to tell altogether. So, till next time…