From chewing on flies, to flies on Chew 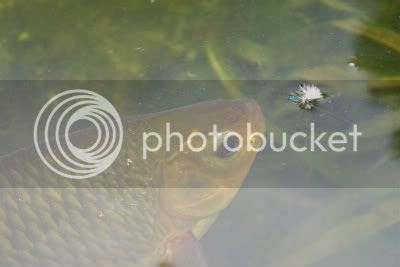 Boundaries continue to blur in recent fishing, with more coarse fish on fly tackle. One thing's for sure- the fish don't give a piscatory toss which category the tackle falls into. Rudd and roach continue to inspire, and it has been a great thrill not only to keep catching them but to see others also testing the waters with success. From my older brother the salmon fanatic to regular fishing mates Norbert Darby, Ian Nadin and Steve Moore, everyone seems to be enjoying some exciting fly fishing for coarse species. 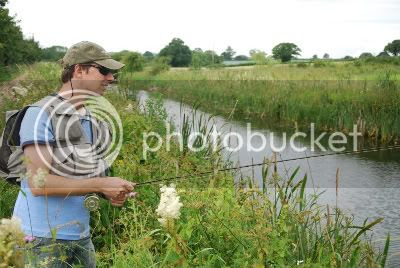 I like this sharing of fishing and ideas (and usually friendly insults). Definitely what fishing should be about, rather than secretive spots, meaningless figures and clashing egos. You learn so much more by being relaxed and sharing info- and certainly, the hotter it gets the more active the roach and rudd seem to be (unlike trout!). 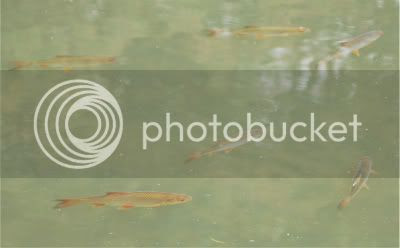 I've also been linking up with film maker and fellow writer Steve Lockett to capture the action in both still and moving pictures. More on this later, but it has been productive fishing with wet flies singling out some delightfully chunky rudd. Spiders seem to work best- either a black and peacock or a red bodied spider in sizes 12-14 especially useful. For the Tiverton or Taunton to Bridgwater canals, I would recommend a long walk with a light rod, but also a long handled landing net to reach over the reeds and other obstructions. Parts of the Amazon probably offer easier water access! The roach and rudd can be tricky to hit, but the bigger mouthed and better sized fish are less rapid biting, hence somewhat easier to hook: 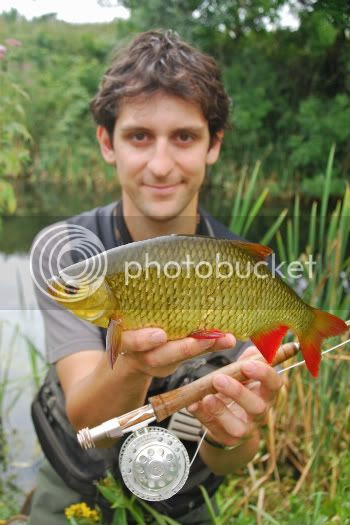 For a very different experience I also headed out for a day in the company of Steve Moore to Chew. We began in search of trout, but with warm, dry weather very little seemed prepared to feed. We needed little invitation to switch to pike, a sensible move. Whilst not exactly hectic, we enjoyed some good sport and stonking battles on fly tackle. 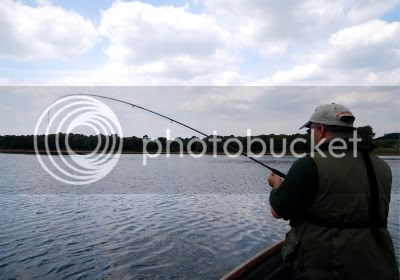 Pike are sometimes strange creatures. You hook the jacks and they go ballistic, making you think you've hooked a monster. And then you hook a fish that feels lacklustre- before it suddenly remembers it's a brute and says "sod this, I'm off!" I was connected to something big just before lunchtime, which not only gave me a near heart attack beside the boat but then proceeded to put twenty yards between us and stick it's gruesome chops out of the water.... before ridding itself of the fly with a shake of the head. I couldn't help but keep playing it over in my head with those fatal words- "if only." We both managed to boat pike later on though, topped by this nice double. For Chew, nothing to necessitate a change of underwear- by any normal angler's standards, a bloody nice fish. 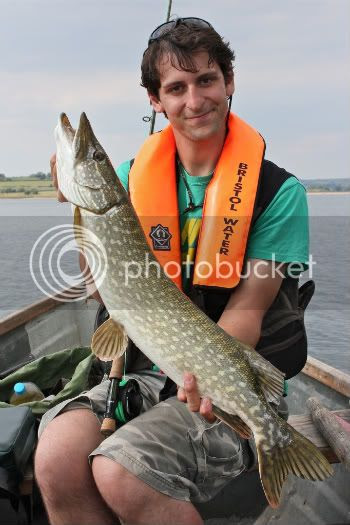 Steve enjoyed his day too, until developing casting-related cramp in his hand next day. Compared to trout fishing it is hard work slinging big flies around I guess, but glad to report Steve was on the mend when I ran into him on the Exe. I had hoped for bream, but basically came nearer to swans on a slow Saturday evening in the town. When you've been fly fishing it can seem a bit dull to sit behind rods. The fly fever is catching with others too and my other half Jo also did herself proud with a rainbow trout on a Kennick "learn to fly fish" day. Learning to cast is a bit like learning to drive I guess- not best done with a lecture from your partner! So much for gender stereotypes then- she caught it, I cooked it in mustard sauce.
In other news, I'm about to embark on a well earned holiday- just as soon as I've killed off the 101 jobs on my "to do" list. Expect a short break then, with possibly some random updates from Sweden and Finland to follow on my travels.
Posted by Dominic at 10:35