Typing this on a bumpy Scandinavian B-road, there's just enough time to reflect on an eventful trip so far. From the flat lands of Holland (a bit like Somerset, but with added windmills) through to Denmark, Sweden we now hit Finland. It's sweltering hot. I have about two dozen mozzy bites and a beard. 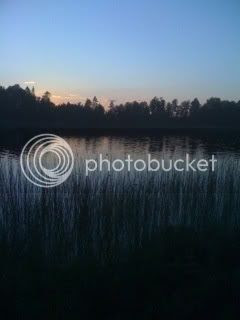 The image above, hastily taken on the phone, could be any one of the hundreds of beautiful, often untouched lakes out here. I've also been marvelling at strange foods and the odd corker of a mullet hair cut.
Trouble is, the fishing has been rock hard. It's just too hot for much except jack pike. Last night was a minor breakthrough though.
Zander are the real target out here- but they tend to frustrate. Just when I manage to tempt one and think I've cracked it, they play silly buggers. The locals all say I should be trolling with about six rods- but this is not my idea of fun. Plus, the lack of a boat doesn't help. Failing this then, I've been jigging over deep holes with the float tube. Thus is where the Zander lurk in the day, albeit thoroughly bored and not especially hungry. The theory is good then- the Practise lacking. Until I got bored and decided to try the edges of the lake on a couple of hot evenings. With the water cooling a little, the predators come to the edges to hunt. Bingo! some Zander at last, to small pike flies and lures!
The other fun of the tube is the looks you get from locals; you know that not quite convinced smile that says "you're really quite fucking mad aren't you?" to which I doff my hat and speak in broken Finnish.

The only other remarkable fish spotted was at the "Ripleys Believe it or Not" museum in Copenhagen. Above is a strange, fur covered trout. It was thought these cold lake fish had developed little coats to keep warm. The original freak trout generated so much interest that later on tourists spotted one Scot putting a little fluffy jacket on a trout! Weirdness seems to follow me out here though- including a nutty Swedish lady convinced that nuclear subs are hiding all over Europe, releasing brain washing chemicals into the atmosphere. If that's true, then I'm a Viking.
Well, on that bizarre note I should sign off before the data roaming charges leave me broke. Later on I will have the unfamiliar pleasure of eating a Zander that I kept for the table. Feels weird for a Brit, but so very different out here with some 180 000 lakes and no shortage of fish! Still, I'm not about to fish like a Tiverton laborer and swap my landing net for a Tescos bag and a blunt object.
Posted by Dominic at 01:32