While I can always wax lyrical about catching pike on the small waters near my home, I've also been lured by the bigger waters lately. Longer journeys mean bigger risks but also bigger rewards. The very nature of writing means that I have to be nomadic and cover as many stories and experiences as possible. But hit and hope doesn't always pay off. You need a bit of local knowledge, or at least some luck. 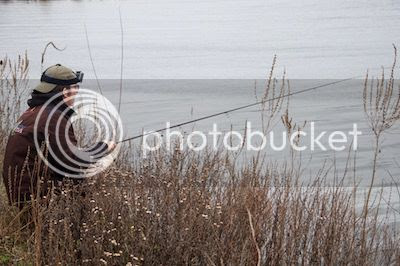 Or you need a local nutter, like Polish angler Seb Nowosiad. We were once thick as thieves fishing on the gravel pits. We fished many of these waters and the trips would take up whole weekends. It was survival at times, besides hunting down pike. We camped out, fished and sometimes damned nearly froze together.

My article in the current Fallon's Angler brought it all back. His wild enthusiasm for pike fishing. His daft superstitions. Seb thinks shaving is terrible luck on the day you fish. He also thinks bananas will lead to disaster if you are fishing on any kind of boat.

Our original aim was to go pike fishing on Llangorse Lake, but trying to get any information, let alone a boat for the day was like trying to contact the dead. So instead we headed north to Farmoor Reservoirs, an imposing concrete bowl of immense size where the likes of Paul Garner and Andy Black slay big pike for fun, while the rest of us slowly freeze and stare. 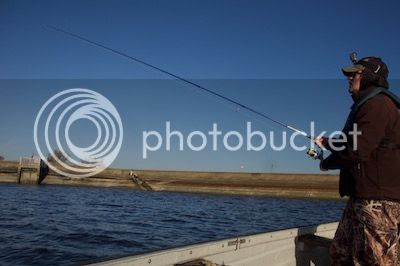 With the sun on your face it was nice just to be out searching the lake though. The structure looked good, I have to say. Classic features here for big perch and trout, and perhaps I should have brought the fly rod. But instead we were hurling big, bold jerk baits and soft lures for the pike. We fished aggressively and covered a lot of water, but the only brief excitement came from the trout. This one hit a lure of 4.5 inches and for all of five seconds fooled us that it was a pike. 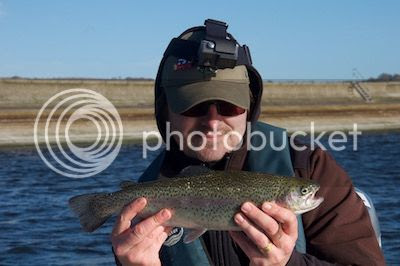 With the gales heavy by three o'clock, however, we thought it would be best to find a more sheltered spot for the next day, and so it was off to try pike fishing on the gravel pits. We had to stop on route just to stock up on supplies, get all the usual bloke stuff- beer, bacon, backy. And because Seb had forgotten to bring any kind of sleeping bag.
"Nah mate, I'll be okay," he says. I virtually have to insist on him buying a blanket. He is a tough but silly bastard sometimes.

Our spot on the pit is only reached in cover of darkness, thanks to the traffic. But it's here the adventure starts. Putting up a bivvy under the headtorch. Feeling the first bite of the wind as you bundle your gear in for the night. I'm convinced our best chance of action will be first light, but once we're set up we also put a rod out each.

I have mixed feelings about night fishing for pike. You do have to be attentive and quick off the mark. You have to stay close to your rods. Big baits also help at night, because even a large pike won't swallow them instantly. So it was a whole sardine for me, and a half lamprey for Seb. And for us, a pan of curry and some IPA.

Seb Nowosiad is hilarious. He's the sort of bloke who will open a can of beans with a machete, start singing or even drop a conspiracy theory on you, after he's had a third shot of Jagermesiter.

Even though this was our first long trip in quite a while, the camp was fairly well organised. Just as well, because the wind lashed out all night, while not very much happened. At one point we had to hold down the corners to stop the bivvy being levered up from the ground by the wind. Rough stuff, but we laughed at the madness of it and at perhaps two or three in the morning things finally calmed.

It was a little after first light that my first run arrived. The bait had been positioned on the near shoulder of a bay on the pit. It had been half an hour or so after I'd just recast a fresh bait, chopping up and ground baiting with the old one. The clip fell and the line pinged free. It kicked steady but only really felt big as it came towards the net. I'm always eager to hook them cleanly and net them quickly. But you can rush them too, especially when it looks like the biggest pike you've seen in some time. 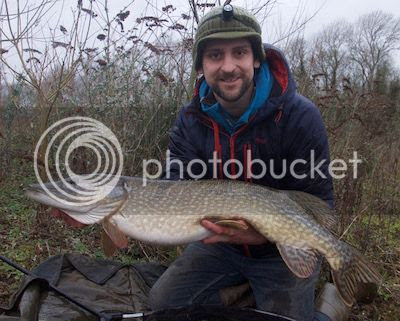 Just a shade over seventeen pounds and beautifully proportioned. And then, for pretty much the whole morning, it was Seb's turn. The next two were good doubles- and at one point I had to help with one fish while the other rod also went off! We had brought plenty of bait too, and built up the area by repeatedly throwing in old baits and chopped pieces. It's also good practise to keep recasting baits. With a lot of weed present, it also seemed sensible to pop the baits up. 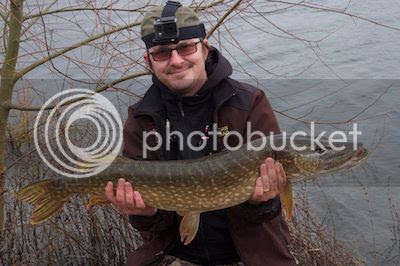 We had also tried lures at intervals and hopping swims, but in the end it was the same area that kept producing. It's not my preferred fishing style, but by sticking to one area you will certainly intercept moving fish at intervals. You'll pick up different pike at different times of the day too, as they become active and roam the pit.

It was Seb who predicted the best fish would come later, in the afternoon, and he was correct when I got a really brutal run. It almost seemed that the fish had hooked itself, such was that first rush. It seemed to take a tense age to get within range. I then saw the length of it and things became serious. Big fish! 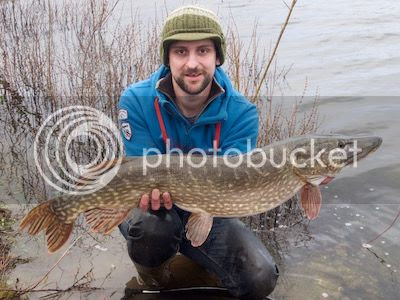 A lovely pike, it was exceptionally long and went 22lbs 2oz. She was well behaved for a quick snap too. I do like to get into with wellies or waders these days, and hold the fish over the water for that final shot or two. You won't harm your catch at all, even if you were to drop it, and the water itself makes a nice light background.

It must have taken me a good couple of days just to properly thaw out and feel normal. I quite often sleep little- or sleep irregularly- on overnight fishing trips. But the fire is burning again, and I'll be back out soon.

Don't forget, if you enjoy my blog do look out for my angling books. Tangles with Pike has further pike fishing articles and adventures, and you can also buy it together with Crooked Lines for just £20 right now. 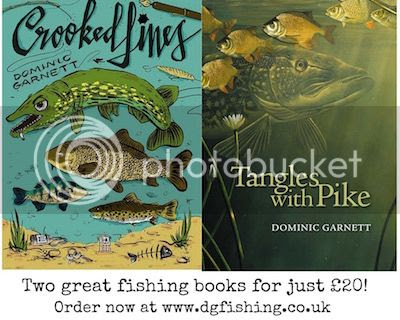